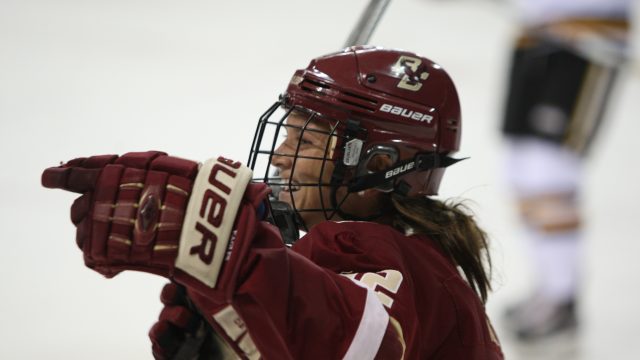 After a tough overtime battle against the University of Vermont on Friday, Boston College women’s hockey returned to Gutterson Fieldhouse the following day to sweep the Catamounts in the two-game series. Katie Burt and Megan Keller had a banner weekend, surpassing long-held records in their respective positions while also helping the Eagles to a 13-game unbeaten streak.

The Saturday rematch saw the Eagles (18-3-4, 14-2-2 Hockey East) make quick work of UVM (10-9-7, 6-5-5). Though the Catamounts held it together for the first period, BC managed three goals nearly in succession during the second period to create a substantial lead. Makenna Newkirk notched the first one six minutes into the period after Sarah Kelly was sent to the box for her second interference penalty of the game. Andie Anastos passed off the puck by the crease to Newkirk, who launched it past Madison Litchfield to set off the offensive onslaught.

Soon after, defenseman Kali Flanagan slotted the puck past Litchfield for her fourth goal of the season and her first since Dec. 7 against Dartmouth. Caitrin Lonergan streaked up the boards and crossed the puck to a waiting Flanagan for a shot unencumbered by any Vermont defensemen. Halfway through the period, Delaney Belinskas capitalized on a tripping penalty by Ali O’Leary. Belinskas used a rebounded shot and made it 3-0 in the eight seconds from faceoff to goal. The rest of the game petered out without any more offensive action, but the Eagles also kept the Catamounts at bay to hand Burt a shutout.

The Catamounts appeared a force to be reckoned with the previous day, however, as the Eagles won 3-2 in overtime. BC failed to connect on the power play, leaving eight of its nine chances on the ice and not in the net. After a stalemate halfway through the first period, UVM struck first with a goal by Amanda Drobot. Mackenzie MacNeil slalomed through BC defensemen and passed it up to Drobot, who was waiting between the faceoff circles. Her hard-hit shot sailed through the commotion in front of the net, and Burt was left with her gloved hand clenched in the air, without the puck.

Despite five power-play opportunities between Vermont’s two goals, none of the Eagles’ chances stuck. Less than a minute after the Catamounts’ second goal, however, BC made magic happe when UVM gifted it with another power play. Keller and Anastos tried their hands at a goal, but Newkirk capitalized on a rebound to end a five-game goal-scoring drought for the sophomore.

Keller tied it up with less than minute left in the third period with a one-off shot from the left faceoff circle, causing raucous celebration in front of the Vermont net and a few Eagles, namely Kenzie Kent, to take a tumble on the ice. The last-ditch effort sent BC into overtime, but not for long. Newkirk needed only 39 seconds to hook around the crease and poke the puck into the right side of the goal for the game-winner.

While any win is sweet, Keller and Burt added the icing on the cake. With the first win against the Catamounts, Keller surpassed BC’s own Emily Pfalzer, who graduated in 2015, in the Hockey East point-scoring record. After Saturday’s game, Burt notched 81 career wins, surpassing Molly Schaus, a 2011 graduate, for BC women’s hockey’s win record for goalies. The pair of wins moves her into the top 10 for number of career wins against goalies in women’s college hockey.

With the loss of Tori Sullivan in the last half of the season and the suspension of Toni Ann Miano in late December, one might have expected the defense to put up a lackluster fight in the last half of the season. The penalty kill, however, remains stalwart, while the offense has struggled to put goals in the net during power plays. If the Eagles can improve offensively, BC could put up a strong enough performance to move up from its No. 6 ranking.

women's hockey vermont katie burt megan keller catamounts
If You Had to Be Named After Any City, State, or Country, What Would Your Name Be?
Despite Hughes’s Record, Women’s Basketball Crushed by Duke