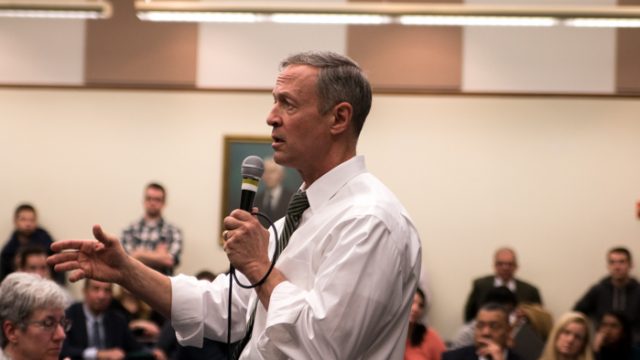 Martin O’Malley on Lessons From 2016 and Reforming American Democracy

After half an hour of taking questions, Martin O’Malley, former mayor of Baltimore, former governor of Maryland, and 2016 Democratic presidential candidate, pulled off his suit jacket and rolled up his sleeves.

He was about to respond to three questions from a writer for The Daily Wire: “Why did you compare Trump supporters to Nazis and the KKK?” “Why did you back down from ‘all lives matter’?” and “Why did Baltimore get worse under Democratic rule, with poverty and unemployment and illiteracy rates being higher than average?”

He then explained that when he said “all lives matter” at a forum in Phoenix, he did not realize that people would be offended and that he apologized in response to the offense. And finally, he defended his record as mayor of Baltimore and governor of Maryland, citing various aspects of his time in office, including crime reduction, majority proficiency in reading and math for grades one through five when he left office, raising income taxes on the top 5 percent of earners, and more.

These questions and answers came after O’Malley’s lecture “Restoring Integrity to Our Democracy,” one of a series of talks and panel discussions O’Malley will give this semester as the Rappaport Center for Law and Public Policy’s distinguished visiting professor.

O’Malley began his lecture by saying, “We’ve all heard long sermons on the beauty of democracy and the brilliance of our constitution—this is not one of those talks.”

He went on to talk about the political and economic challenges facing the United States, mentioning issues such as income inequality, job loss among Americans with only a high school diploma, and a general lack of hope.

“Our democracy is in trouble,” he said. “We have become bored with our own politics, so bored in fact that most of us would rather be entertained by it than read about it. We would sooner protest than take part in its healing.”

From this claim, O’Malley laid out five “things we must do”: developing an opposition to “Trumpism” and promoting economic opportunity for all; adding a constitutional amendment that guarantees the right to vote; combating the corruption of Democratic institutions by “big money;” ending gerrymandering through the institution of non-partisan districting commissions; and individuals taking action to rebuild the Democratic Party and reputable news organizations.

In speaking about opposition to Trump, O’Malley mentioned women’s marches around the country this past Saturday, which he said represented all of us.

“Trumpism, like other brands of elected fascism before it, can only succeed, in fact, in an atmosphere of economic desperation,” he said.

He went on to argue that the economy is not about money, but people, and emphasized the importance of good jobs and rising wages.

Moving on to his second point, he said that America is the “only advanced democracy that is actively making it harder for people to vote.” He argued that voter ID laws have disproportionate effects on women and people of color. The 14th Amendment guarantees equal protection under the law, he said, but does not explicitly guarantee the right to vote, as his proposed constitutional amendment would.

“You shouldn’t have to stand on your head, gargle peanut butter, spit nickels, and whistle ‘Dixie’ in order to register in the United States of America,” he said.

Overturning Citizens United and enacting publically-funded campaigns were two steps he proposed to fight the corrupting influence of money in politics. He quoted a television interview of a blue-collar Trump voter who said “Our country’s got cancer, and Donald Trump is just the chemotherapy we need.” This attitude, according to O’Malley, is a backlash against the “self-dealing greed of elites.”

For his point about gerrymandering, O’Malley mentioned the 2010 redistricting process he headed while governor of Maryland.

He then promoted non-partisan districting committees and a ranked voting system, which would allow voters to vote by ranked preference, instead of only voting for one candidate. Referencing the Electoral College, he called it “a relic of the colonial America” and said that it was “time to throw it away.”

In his final point he argued for the importance of rebuilding the Democratic Party and promoting “objective truth” through media organizations. He mentioned the media’s role in Trump’s election and pointed to the frequent coverage of Trump rallies without fact checkers and Trump’s placement in the center of the debate stage. To combat this in the future, he said that people need to subscribe to reputable news organization, in order to support good journalism.

At the end of his talk, O’Malley harkened back to the cancer metaphor of earlier.

“Now it’s January 2017 and the unthinkable has happened,” he said. “The one candidate Hillary Clinton could beat instead beat her, as too many Americans concluded he was just the chemotherapy we needed.”