Home » Krista Tippett Speaks on the Meaning Behind Words 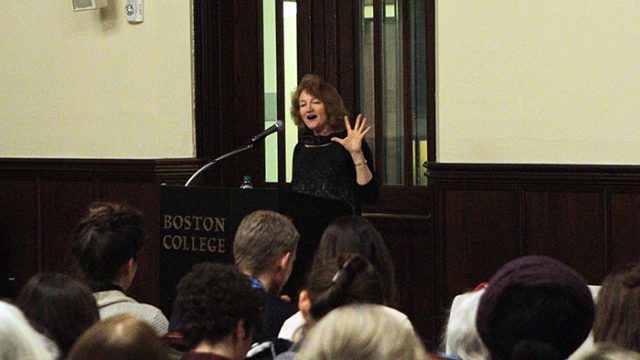 Krista Tippett Speaks on the Meaning Behind Words

Gasson 100 was buzzing with anticipation for the arrival of author and journalist, Krista Tippett. Many lined the walls and sat on the radiators to hear her speak about “The Adventure of Civility.” Tippett’s accomplishments and the timely theme of the talk drew a richly cross-generational audience. In such a highly-contested time from such a valued voice and eloquent speaker, it was worth it to stand or sit without a chair.

“Life on this planet seems like new territory,” she said.

Tippett spoke of how American culture has narrowly equated public life with political life and how she is interested in public life. She stated public life is common life, something bigger than politics and that the question of democracy opens up the question of what it means to be truly human and what our purpose is in the world. At this point in our history, she believes we are in a reformation in all of our disciplines and institutions.

In her opening remarks, Tippett discussed some of her interviews with guests. She referred to an interview with Frances Kissling in which the political activist spoke of her lesser-known experiences and of giving herself over to what it meant to be in a real relationship with her political opposites. Tippett noted that one has to approach it with the understanding that there is good in one’s political opponents, but also that it is easier to preach to the choir, those with whom you agree, because the choir is already there.

Tippett gave two encouragements to the audience in her talk that seem simple on the surface, but can be especially challenging in practice. Tippett described how the words we use shape how we understand ourselves and to caution our use of them because the same word can hold more than one meaning. Tippett used the example of the word tolerance. The second encouragement Tippett gave was to rediscover listening.

“We have been trained to be advocates for what we care about, but it can get in the way … Listening is not primarily being quiet, it’s about curiosity,” Tippett said. “We must look for the humanity of the words of each other.”

In addition to her encouragements, Tippet discussed “being in touch with intentionality.” Tippett mentioned how whenever someone walks into any question, they walk with their whole life as their response—as does the person who posed the question. This is often why people get so invested in their answers. Because of this, Tippett noted, it is important to have intentionality behind our questions and that, while it can be difficult to transcend a combative question, it is also hard to resist a generous question. Tippett made the point of seeing people giving up on a civil dialogue and that we cannot hand our deliberation to those polarizing voices.

When asked about how Tippett would apply these principles to journalists that don’t have the luxury of time that she has, Tippett responded that “facts have never been enough to tell the story of us complicated, illogical creatures … the facts took us a long way, but they have stopped.”

Tippett also proposed a phrase that could have really helped during this election cycle.

“Tell me what you mean with that word when you use it,” Tippett said.

Tippett stated that in order for this proposal to work, one must genuinely mean it. Referring back to a previous point, Tippett mentioned that just like one brings their life experiences into answering and framing questions, certain words mean different things for different people.

Tippett continued by discussing the relaxing nature of a conversation in which you feel comfortable. One piece of advice Tippett offered in achieving that comfort is to ask questions that the person would find interesting. In doing so, Tippett stated that the interviews become less of a Q&A format and more like a conversation.

Tippett ended the talk by informing the audience of one question she likes to begin her interviews—a technique from the Benedictines. It includes taking up a burning issue and having people answer it through the story of their life. Tippett utilizes this technique by asking about the spiritual background of one’s childhood.

Tippett noted that the response people gives her for these questions is a starting point. Where one starts is extremely important. Tippett pondered what would happen if people who voted for Hillary Clinton in this election and people who voted for Trump got together and talked about why they voted for who they voted for through the story of their lives and really listened. Tippett argues that it would profoundly impact the way we see our fellow Americans.

“Conversation conducted with openness and civility can be transformative,” Tippett said.