Netflix’s ‘The Frontier’ Pushes No Boundaries in Television

Unfortunately, The Frontier doesn’t really push the boundaries of television, especially by Netflix’s standards. It is a collaboration between Netflix and Discovery Channel (Canada), and it is the first scripted television series ever produced by Discovery. Set in 18th century North America, pre-Revolution, the show’s main premise is the fur trade that exploded in that area during the time period. The Frontier has a large cast of characters spread throughout a city and the surrounding wilderness. The Hudson Bay Company, a real historical organization, features prominently in the show, and mainly plays an antagonistic role.

The first episode of the show struggles under the weight of its expositional burden and a larger number of clichés. It opens on Declan Harp (Jason Mamoa), an outlaw fur trapper, cutting the throats of British redcoats. It is clear The Frontier wants the audience to know that Harp isn’t someone to be trifled with. He does, however, garner some goodwill from the viewers when he releases his last captive instead of killing him. Harp then meets Jean-Marc Rivard (Paul Fauteux), a fur middleman that works as a go-between for Harp and fur traders. Harp, in no uncertain terms, tells Rivard to get him a meeting with Samuel Grant (Shawn Doyle) on pain of death. Grant later turns out to be a very wealthy and well-connected fur dealer. The audience learns that Harp is looking to seize power from his enemy and previous employer, the Hudson Bay Co.

Meanwhile, Michael Smyth (Landon Liboiron) and his two friends thieve and pilfer food from merchants and ships. While attempting to steal a barrel of gunpowder from a Hudson Bay Co. ship, they are discovered by British redcoats. One friend is stabbed to death, while Clenna Dolan (Lyla Porter-Follows), Smyth’s romantic interest, is arrested. Smyth manages to hide aboard the ship. Thus begins the first tired cliché. Smyth is fairly clever in remaining unseen, but while crouched in his hiding place, he falls asleep. When he wakes up, the ship is on its way to a new city—the same city that all of the other characters live in and where the setting of the show will take place.

Smyth went to sleep after experiencing what was probably the worst night of his life. His friend was brutally murdered in front of him. Then, Dolan, the girl of his dreams, was arrested and taken away. Finally, Smyth himself had to hide or be killed. Not one of these things is conducive for a good night’s sleep. He continues to sleep peacefully when the ship is leaving port, so he has no choice but to participate in the plot of The Frontier. Coincidence is not an original or interesting means of moving the plot forward (i.e. A Tale of Two Cities). While Smyth hides amidst the barrels and crates, two soldiers walk by. They just happen to be discussing the attempted theft that occurred the night before. They just happen to be in earshot of Smyth. They just happen to be talking about Smyth’s love interest, and they just happen to say exactly what happened to her, down to the very name of the prison to which she was taken. Now Smyth has his motivation because The Frontier pounds him in the face with it.

The show then jumps to a scene of Dolan being locked away in prison by two guards. She struggles and is sexually assaulted by one of the men. This is another tiresome cliché. Every time a movie or show wants to make sure the audience knows a certain character or person is evil, they turn them into a rapist. It’s very unpleasant to watch, it further objectifies the female characters, and is a very black and white approach to creating a “bad guy.”

Fast forward, the audience meets the main antagonists, Lord Benton (Alun Armstrong) and Captain Chesterfield (Evan Jonigkeit). The audience learns of their villainous roles early on in the show when they, that’s right, sexually assault women.

At this point, The Frontier is done setting up its story and has wasted most of the first and second episodes on “setting the scene.” The show does begin to get better from here on, but after all of this it’s difficult to say if it’s worth the time and energy. The acting by Zoe Boyle and Christian McKay, who play Grace Emberly and Father James Coffin respectively, is well done and refreshing, but Mamoa (the “big name draw” for the show) doesn’t really do much besides grunt and raise his eyebrow accusingly. The Frontier seems to be Discovery’s attempt at replicating the success of History Channel’s Vikings. It does not attain its goal, however, and feels overdone. Overall, The Frontier is a decent show to binge on Netflix between releases of good shows like House of Cards and Black Mirror, but would be hardly worth it if it was released from week to week. 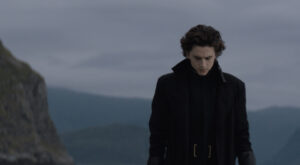