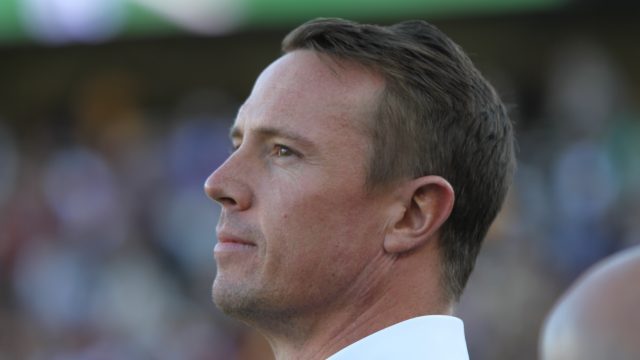 As soon as Hunter Renfrow hauled in the game-winning pass of this year’s College Football Playoff National Championship game, the tide turned. Clemson had just knocked off Alabama—a team that hadn’t lost a national title game in the Nick Saban-era.

The rematch between the Tigers and Crimson Tide was decided with just a few seconds remaining in the 2016-17 college football season. But the ACC overtook the SEC, a conference that has won eight of the last 11 national championships, long before the two-yard touchdown toss.

Deshaun Watson’s final drive was simply a culmination of the entire season, a year in which the conference won nine bowl games—three more than any other conference in college football.

But such a coup doesn’t guarantee the best recruits. In fact, according to Rivals.com, Clemson’s 2017 recruiting class is estimated to come in 11 spots lower than last year’s. Even with this year’s National Champion and Heisman Trophy winner, the ACC still falls short of the SEC and Big 10. And it’s pretty simple.

Many of the country’s finest high school football players have their eyes on an NFL career. In last year’s NFL Draft, a combined 98 players from the SEC and Big Ten were selected—that’s more than the Pac-12, ACC, and Big XII combined. So, it was no surprise when 28 of this year’s top 50 ESPN 300 recruits committed to play for SEC and Big Ten schools.

As long as these two conferences produce NFL talent, there’s nothing the ACC can do. A fortune that is especially problematic for its bottom feeders—schools like Boston College.

Despite bouncing back from an embarrassing 3-9 campaign and earning its first bowl victory in nine years, the Eagles’ accomplishments continue to be outweighed by their conference foes’. At the end of the day, BC still finished last in the Atlantic Division.

Following the Eagles’ dismal 2015-16 season, Rivals.com reported that BC brought in the ACC’s weakest recruiting class. Head coach Steve Addazio could not coax a single four-star recruit to come to Chestnut Hill. Of the 17 recruits, 15 were scouted as three-star prospects.

On Feb. 1, BCEagles.com will broadcast a National Signing Day Show, revealing the Eagles’ 2017 recruiting class. BC is projected to jump from 82 to 57 in the rankings. Regardless, the Eagles will never stand atop the recruiting podium. It’s hard to convince an 18-year-old that Commonwealth Avenue is more desirable than South Beach.

But it doesn’t matter, because all it takes is one player to define a team. Some football schools are known for consistently dominant teams and unprecedented dynasties. Others, like BC, are remembered for fostering players that are immortalized on the field. And the Super Bowl berth of BC alumnus and current Atlanta Falcons quarterback Matt Ryan serves as a perfect reminder.

Ryan himself was once just a three-star recruit. Coming out of William Penn Charter High School, Rivals.com ranked him as the 25th best pro-style quarterback in the 2003 recruiting class. That placed the 6-foot-4 gunslinger behind JaMarcus Russell (sixth), Brady Quinn (10th), and Matt Flynn (16th). Yeah, those three.

Russell’s legacy is set—he will forever be known as one of the NFL’s biggest busts, who floundered in free agency, taking the figure of a defensive tackle. Quinn is famed for his draft-day freefall, which landed him with the Browns, a virtual death sentence for quarterbacks. And Flynn relied on one 480-yard, six-touchdown performance to extend his journeyman career far longer than it probably should have lasted.

None of them have played a down in the NFL since 2014.

But Ryan’s ranking might have been justified at the time—he was by no means a superstar. In his senior year of high school, the Philadelphia native threw for just 1,048 yards. Not to mention that his completion percentage hovered over a mere 50 percent during his three years at the helm.

Ensuing his arrival to BC, Ryan was redshirted and remained a backup until his sophomore season. But once then-head coach Tom O’Brien gave Ryan the nod in the fourth quarter of the Eagles’ loss to North Carolina, he never gave the starting role back.

In what was BC’s inaugural season in the ACC, Ryan piloted the team to wins in each of its final three games, capping off the season with a victory over Boise State in the MPC Computers Bowl.

Yes, Ryan’s play provided optimism, but that was secondary. His final push propelled the Eagles to a No. 18 ranking. One year removed from the Big East, and the team was already in striking distance of the conference championship—atypical of teams making the leap to the Power Five.

For instance, take Rutgers, BC’s former Big East rival. After leaving the conference in 2014, the Scarlet Knights have mustered just four Big Ten wins in three years. Call it what you want, but Ryan set a precedent for BC athletics. There wasn’t a rebuilding period. There weren’t any excuses. Amid Ryan’s tenure, all that existed was a winning culture.

And in his junior season, the ascension continued. Despite a sprained ankle in the season opener and a broken foot at mid-season, Ryan refused to let injury disrupt a year filled with career-highs. Leading the ACC in passing yards, he ultimately guided the Eagles to a 10-3 record and another bowl victory.

Ryan decided to return for his senior season, and it paid off. He aired out for 4,507 yards—more than Aaron Rodgers and 28 other starting NFL quarterbacks threw for in 2016—and 31 touchdowns. Entering November, the Eagles boasted an undefeated record and a No. 2 ranking. After overcoming back-to-back conference losses, Ryan and the Eagles found themselves in the program’s first ever ACC Championship game. In a losing effort, BC made a name for itself on the national stage, all thanks to Ryan.

The four-year BC signal caller would go on to beat out Heisman Trophy winner Tim Tebow for the Manning Award—crowning him as the nation’s best quarterback.

But, like all Eagles legends, Ryan maintained the ideals of a BC student. By working hard in the classroom and developing on the field in front of the eyes of Superfans, classmates and alumni were able to connect with Ryan. He was their hero, but also their peer.

Earlier this year, BC retired Ryan’s jersey during halftime of the Eagles’ matchup against Connecticut. The game was a lousy one. UConn’s subpar defense made BC’s 127th-ranked offense look like a second coming of Ryan’s. Nevertheless, the student section was crowded with anxious fans—comparable to the turnout when BC played the eventual National Champion Tigers.

They weren’t in Alumni Stadium to see BC defeat a pitiful Huskies team, they were there to get a glimpse of their idol.

As soon as “Matty Ice” walked out onto his former playing ground, the “Fire Addazio” chants immediately grew quiet, and students erupted in cheers. These are kids that were 9-12 years old when Ryan played his final season at BC. You can assume that most of them never watched his thrilling fourth-quarter comeback win over then-No. 9 Virginia Tech. Regardless, he walked the same campus, ate at the same dining halls, took the same classes as every other BC student. In this token, they feel as if they are tied to him.

When family members make the unoriginal and obnoxious comment about how BC sports aren’t “doing so hot” lately, students are quick to throw in Ryan’s name in defense. His success legitimizes the program and, more importantly, provides hope.

The fact that a three-star recruit from Exton, Pa. could become the face of college football is very real for BC fans. If it could happen once, it can happen again.

Ultimately, it all comes down to coaching. In 2015, SB Nation traced the origin of the past decade’s non-blue chip first round draftees. BC headlined the list with six.

But Addazio didn’t recruit any of them. Again, we return to O’Brien.

In 2004, he plucked another diamond in the rough: B.J. Raji. Besides BC, only Wisconsin and Rutgers extended offers to the former Green Bay Packers’ ninth overall pick. He was overlooked by countless schools. Once he arrived at BC, he proved them all wrong.

And that’s what BC needs to pitch again. Look at men’s basketball head coach Jim Christian. He discovered Ky Bowman and Jerome Robinson. The backcourt duo was neglected by numerous schools, even those in their home state of North Carolina. Both of the underclassmen were bypassed by every ACC program within the Tar Heel State. By coming to BC, they were given the opportunity to play against the best teams in the nation—the ones that never gave them a chance.

Addazio can even use Ryan, the most prominent of BC’s fabled players, as a talking point. But with a history as rich as the Eagles’, there are several routes that the fifth-year head coach’s can take.

Doug Flutie’s last-second prayer of a deep ball that miraculously landed in the hands of wide receiver Gerard Phelan, forever credited the Eagles with the famous “Hail Mary” play-call. Mark Herzlich, one year removed from his ACC Defensive Player of the Year campaign, battled Ewing’s Sarcoma—a rare form of bone cancer—en route to an inspiring return to Alumni Stadium for a delayed senior season. Luke Kuechly set the BC and ACC record for tackles in just three seasons of play before leaving for the NFL.

With every NFL touchdown pass that Ryan throws or every tackle or interception that Kuechly makes, the yearning for the next Chestnut Hill great increases. So now that Ryan is knocking on the door of his first Super Bowl ring, this craving is at an all-time high.

All signs are pointing to redshirt freshman Anthony Brown taking over as BC’s next potential savior. The dual-threat quarterback is poised to be the Eagles’ first long-term solution at the position since Chase Rettig’s three-year campaign (2011-13).

Brown is also a three-star, redshirt. Hey, that’s a start.

If Ryan outduels Tom Brady in Houston, BC fans will share a part of the Lombardi Trophy with their former quarterback. It will also serve as the pinnacle of Ryan’s development—something he started when he put on the maroon and gold.

It’s fitting that Under Armour serves as BC athletics’ sponsor. This fall, at the Fortune Most Powerful Women Summit in Laguna Niguel, Calif., Under Armour’s senior vice president of global retail, Susie McCabe, explained how the company selects which athletes and teams to promote.

“The biggest thing we look for is character,” McCabe said.

BC may never compare to state schools as a football power and may never pull in five-star recruits, but it will always be the home for transformational players—guys that use doubt for  motivation. Guys that have character. Guys like Ryan.

For all we know, the next BC football legend could be just a season away.