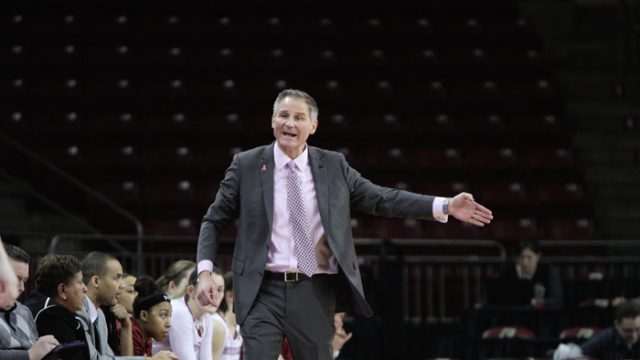 Fasoula’s Double-Double Not Enough in Loss at Wake Forest

Head coach Erik Johnson’s squad smelled opportunity as Wake Forest got a little too comfortable with its third-quarter lead.

Down by 20 points early in the second half, with star center Mariella Fasoula on the bench, Boston College women’s basketball refused to quit. As Fasoula reentered the game, the Eagles found their second wind.

Stepping up on defense, BC shut down the Demon Deacons’ top scorer, Amber Campbell, in the last five and a half minutes of the third. Offensively, the Eagles managed a 10-2 run to close out the quarter on the back of freshman forward Emma Guy. Cutting the deficit to 12 points entering the final frame—the smallest it had been since early in the second quarter—and starting with the ball, the Eagles were in prime position for a comeback.

But Wake Forest was far from beaten, and the Demon Deacons were hot at home.

Still holding on to a healthy lead at the start of the fourth quarter, Wake settled down and reclaimed control of the game. Closing out the third with a solid defensive possession and huge block, the Demon Deacons never let their foot off the gas pedal.

Limiting BC to a measly 1-for-7 shooting from the field in the first four minutes of the quarter, Wake’s talented backcourt of Amber Campbell and Alex Sharp combined for 11 in the fourth, never hesitating to pour it on as the game came to a close. Five fouls within the first five minutes sealed the fate of the Eagles (8-13, 1-7 Atlantic Coast). Wake ultimately held on to defeat BC, 71-55.

Opening the game with three forced turnovers, Wake (13-7, 4-3) jumped out to a 7-0 lead. It seemed as if the only thing keeping the game in check was the Demon Deacons’ own turnover woes. Matching BC’s three early turnovers, the major difference came in Wake’s 3-point shooting.

Early treys fueled a Wake Forest offense that rolled through the first half. Shooting 4-for-7 from downtown, the Demon Deacons managed a stifling 48 percent mark from the field and recorded 41 points in the first half, their most this season. The offensive onslaught continued as Wake outscored the Eagles in every quarter but the third.

Campbell put her scoring prowess on display with 19 points while also pulling down seven boards and recording four assists. Three other Deacons—Sharp, Quinn, and Penna—contributed double digit scoring totals by the end of the night. They also dominated the boards, outrebounding the Eagles 41-to-35, and were able to win the turnover battle despite a sloppy game on both sides—18-to-14 in favor of the Deacons.

The Eagles, who shoot just above 31 percent from beyond the arc on the season, struggled to keep up. BC mustered a 0-for-7 effort from deep in the first half and went 0-for-12 overall for the game. Shooting 41 percent from the field on the night, BC struggled to find consistent offense. That is, besides Fasoula. A machine in the paint with her infamous ‘ice-cream scoop’ shot, Fasoula played a team-high 36 minutes and scored a game-high 26 points on 13-for-22 shooting. Pulling down 10 rebounds to cement her double-double, Fasoula was a bright spot in the midst of what turned out to be one of the least noteworthy shooting displays by the team yet this year.

A strong scoring performance by forward Georgia Pineau off the bench as well as a promising display from freshman starter Emma Guy are both signs for optimism. The poor outside shooting numbers are more of an anomaly than a regularity—just ask BC’s 3-point record-holder Kelly Hughes—as BC’s offense works to gel.