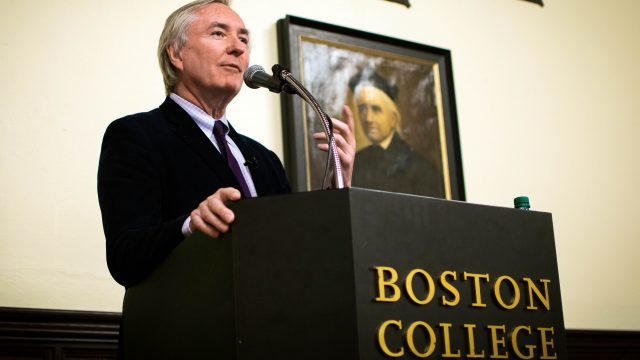 On Thursday night, O’Connell, founding physician and current president of the Boston Health Care for the Homeless Program (BHCHP), gave a lecture as part of the Park Street Corporation Speaker Series on his experiences as a health care provider to Boston’s homeless population.

After his residency, in the 1980s, O’Connell was assigned to work at a nurse’s clinic for the Pine Street Inn shelter. Through continuation and expansion of his work at the clinic, O’Connell eventually transitioned from washing feet to providing a variety of care  for homeless people throughout Boston, including riding from 9 p.m. to 5 a.m. in a Pine Street Inn van on Mondays and Wednesdays, looking for homeless people who might need help.

His lecture, titled “Lessons from the Streets: Three Decades Caring for Boston’s Rough Sleepers,” highlighted his experiences medically serving the inner-city homeless for the past 30 years.

O’Connell centered his lecture around the problems faced by Boston’s homeless population, and how BHCHP, which serves over 13,000 homeless people in Boston each year, works to combat them.

According to O’Connell, the health conditions of homeless people in inner-city Boston are dire. He showed a picture of a group of homeless friends taken in 1999 on the MGH campus. Five years later, he said, all but one of them had died.

“In inner-city Boston, in the shadows of some of our best institutions, the care looks more like third-world care,” O’Connell said.

Throughout his lecture, O’Connell told stories of patients battling cancer, tuberculosis, AIDS, Hepatitis C, and mental illness. Before the foundation of BHCHP, these patients likely would have never received the life-saving treatments they needed.

A large part of the problem, O’Connell said, had to do with the fact that homeless people often don’t seek treatment until their conditions became so detrimental to their health that they have to go to the emergency room.

“It’s all about functioning,” O’Connell said. “If they can function, they think they’re okay. They wait until they can’t function to go to the doctor.”

To combat this, BHCHP heads to the shelters and to the streets in order to administer medical care.

“You can do all sorts of things if you get creative and you go to where people are,” O’Connell said.

BHCHP has a street team which provides care to homeless people who don’t seek medical care on their own. They operate under bridges, on park benches, at T stations, and even at McDonald’s. They also bike around the streets of Boston in order to administer medications to their patients without requiring them to come into the clinic.

“In inner-city Boston, in the shadows of some of our best institutions, the care looks more like third-world care.”

—Jim O’Connell, president of the Boston Health Care for the Homeless Program (BHCHP)

BHCHP was founded with the intentions of making the program an issue of social justice rather than charity, O’Connell said. They didn’t want the program to be full of volunteer doctors who “come around on Monday but aren’t there when they’re needed on Thursdays.”

“We have to provide continuity of care,” O’Connell said.

This means that the BHCHP team works around the clock, and carries beepers 24/7 so that they can always be in-the-know when a patient needs assistance.

The BHCHP board of directors is composed of medical health professionals as well as homeless people. Through this unique collaboration, they aim to remain in-touch with the circumstances and the needs of their patients.

The goal of BHCHP is to ease suffering as best as they can, O’Connell said. The program has certainly done so—he and the rest of the doctors on his team devote their careers to caring and providing for marginalized populations.

According to O’Connell, the most difficult part of his job stems from the reality that the plight of homelessness in Boston is too large for any one program to tackle.

“I went into this thinking that I could change things,” he said. “But I’m just a doctor—I can’t do that. My job is to take care of people. Homelessness isn’t a health care problem. To solve the problem, we need everybody working together.”