Home » Somewhere Beyond the Sea, Meet the Betta Fish of BC 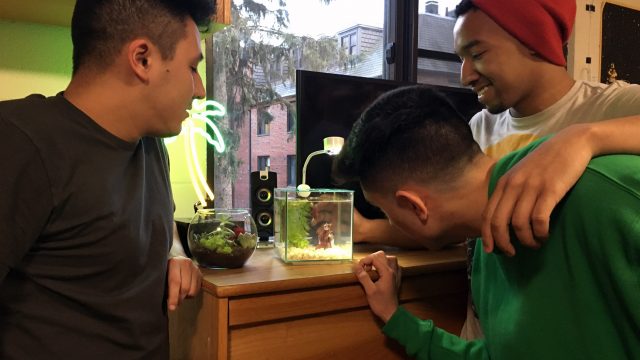 Somewhere Beyond the Sea, Meet the Betta Fish of BC

Boston College’s newest residents have arrived in the dorms after Winter Break, and though they’re small, they are much more welcome than the occasional mouse. In keeping with BC’s rules that no pets (besides service animals) are allowed to live with students except for tropical fish in tanks fewer than 20 gallons, students are making tiny additions to their on-campus families.

Take Horsey, for example. Despite its name, Horsey is a pink betta fish that lives in Fitzpatrick with Taylor Chodash, MCAS ’20, and Meghan Boyer, LSOE ’20. The pair was at the right place at the right time when they decided to purchase their beloved pet—in this case, in a strip mall in Newton, shopping for school supplies at Michael’s, a store that sells arts and craft products and not school supplies.

“We got out of Michael’s, and we see a Five Guys and a Petsmart, and me and Meghan looked at each other and just smiled,” Chodash said.

On an impulse, the two walked into the store and examined the pets for sale. They walked out a few minutes later with a $5 fish, a small tank, and pellets for food—roommate agreements be damned.

“There was no planning,” Boyer said. “We didn’t really talk about this among the roommates.”

Though Horsey has a few limitations when compared to a dog, Chodash and Boyer maintain that their pet motivates them to get out of their beds in the morning and hit the Plex, or that he offers a listening ear when a friend just won’t do. The two have tried to play games with the fish, such as putting a bottle cap into the tank so Horsey can have something new to explore. In addition, the roommates have attempted to introduce a Pavlovian response in Horsey by ringing a bell whenever they give him his pellets. While he doesn’t comprehend their training methods, Horsey is better than man’s best friend. In fact, he’s better than any man at all.

“We said we need a man who will stick around, who’s kind, who treats us right, and Horsey is that man for us,” Boyer said.

They have also created a stimulating environment for their pet, including vibrant plastic plants and white rocks. When Boyer’s Luke Kuechly bobblehead fell off her dresser, its head was added to the tank to give Horsey a uniquely decorated home.

On College Road, another fish seeks to find a place among college students. Grandmaster Splash is a betta fish named after the famous DJ of the ’80s and ’90s and in honor of the New York roots of Russell Shepard, MCAS ’19, Devin Hanel, MCAS ’19, and Ernest Benjamin, CSOM ’19. Acquired a week ago, Splash has quickly become an integral part of the triple in Welch. Though the care of the fish is minimal—a twice-daily feeding of three pellets a day and a monthly water cleaning due to the tank’s environment—Benjamin believes that Splash has brought a sense of responsibility and collaboration to the three.

“We all kind of wanted something to call our own and to look after, and we couldn’t go bigger than a fish, so it was sort of the perfect medium to get,” Benjamin said.

For the triple, Splash not only provides an aesthetic enhancement to the room—his tank is placed between a small neon palm tree and a bowl of succulents, to “remind him of his tropical roots”—he has also boosted the spirits of his human companions. According to Benjamin, it is nice to know that there is something in the room that needs to be cared for, and that besides them, there is actual life in the cramped confines of dorm living. When students get burnt out by the onslaught of tests and homework, a fish could serve as a reminder of responsibility and worth to others.

The benefits of fish in dorms range from therapeutic responsibility to a certain “it factor” that draws people to a room.

When Chodash and Boyer announced to their floor during Hanging Out On Tuesdays that they had purchased a pet, they piqued the interest of all the girls in attendance. Aside from someone down the hall that had previously owned a fish, their room is the only one on the floor to have such an addition to their room—and it’s something they consider a blessing and a curse.

“Basically everyone uses us for the fish,” Boyer said.

Benjamin agrees that students see any kind of pet in a dorm as a novelty, and that friends of his have mentioned a desire to see his fish or even get one of their own. To introduce Splash into society, the triple held an intimate “birthday party” with friends and family.

But alas, the fish population at BC is in a constant state of flux. With Petsmart offering a 15-day money-back guarantee on its fish, the likelihood that someone’s dear pet will last the year, much less a month, is minimal. Horsey has since outlived this guarantee, so to his owners he is a ticking time bomb. Fortunately, his owners have prepared themselves for the possibility that Horsey can die any day now, and have mapped out his funeral plans. To return to his original roots of being bred expressly for Petsmart and never actually living his life as a tropical fish in the wild, they plan on laying him to rest in the Chestnut Hill Reservoir. It will serve as a reminder of his active life, according to Chodash.

As for Splash, Benjamin takes a more optimistic approach. He hopes to add more fish and acquire a bigger tank—still under the 20-gallon limit, of course.

“I think BC should be more pet-friendly overall,” Benjamin said. “I’d like to see every room be given a pet fish.”