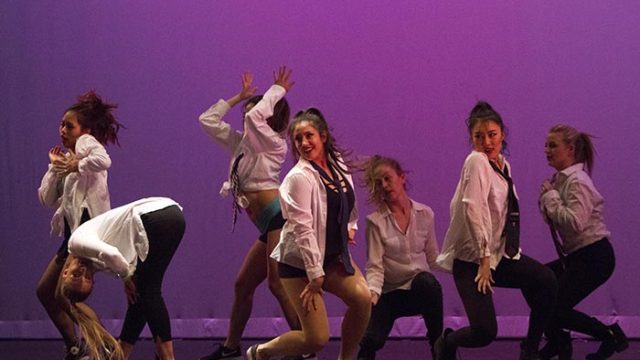 The definition of synergy is “the interaction or cooperation of two or more organizations, substances, or other agents to produce a combined effect greater than the sum of their separate effects.” Synergy’s combined effect was electric this past Friday night in its performance of “They Don’t Do it Like My Clique.” The audience went wild with every split and sashay, and for every joke and heart-felt moment.

“Mean Girls,” the Beyoncé-themed routine, found all members decked out in pink and black, looking fittingly flawless as they payed homage to Queen B. The choreographer of the number, standing mid-center for a majority of the dance, was clad in a gaudy furry pink jacket and a black shirt that read, “Don’t Worry, Be Yoncé.” The word to best describe the clothes could also be used to describe the night as a whole—fabulous.

One of the funniest dances of the night, the “Synergy Auditions” number, saw the group bringing in members of the audience and members of the dance troupe, Dance Organization of Boston College (DOBC), to “try out” for the group. The girls of DOBC were poised to execute elegant ballet steps. In comedic fashion, the differing styles led to some clash of stylistic visions. The audience participants brought some laughs when they tried to emulate the “Juju on That Beat” dance trend, led by members of Synergy. This was a fun way to engage everyone in the dance in a different way.

Several routines saw other dance crews at BC take the stage with Synergy. Presenting Africa To You (PATU), Females Incorporating Sisterhood Through Step (F.I.S.T.S), Dance Ensemble, and DOBC all teamed up to take part in the fun. As the outside dance ensembles took part in the routines, their own style of dance would end up morphing with Synergy’s hip-hop style. The ballet dancing in the Dance Ensemble would soon begin to adapt until it had a visible Hip Hop element present in their dances. PATU had elements of African dance that synthesized with the Synergy hip-hop dance style.

The group also featured numbers that incorporated aspects of life at BC into the dances. With dances entitled “Student Activities Day,” “#CASHFLOWGAINZ,” and “Do You Even Lift, Bro?,” the group brought aspects of life at BC together with humor and flair. “Student Activities Day” highlighted all the different people looking to get involved at BC. “#CASHFLOWGAINZ” poked fun at students in the Carroll School of Management at BC, that they had it all figured out and that they would be secure in jobs and with money after graduation. “Do You Even Lift, Bro?” catalogued the different types of workout classes available at the Flynn Recreational Complex.

The innovative themes for the dances and creative costume choices to go along with the themes were fresh and relatable. Although certain numbers had every member dressed exactly the same, some allowed for more freedom and thus let the personality of each dancer shine through. Some dances like “Student Activities Day” and “N3RDS” featured all members in glasses, button down shirts, khakis and suspenders, and members stood out with different colors or styles of those articles of clothing.

One of the most touching parts of the performance was the video compilation of intimate moments throughout the year. The audience caught glimpses of the team at dance practices, fancy gatherings, and times they shared together. In the group’s own words, some of the members named words like dance, growth, raindrops, and family to describe what Synergy meant to them. The audience could feel the connection and love the dancers had for each other and the dances they were performing. The audience response to the dancers and the dancing was overwhelming.

Whether it was cheering in support of their favorite Synergy member or the long standing ovation with audience members jumping out of their seats, the audience was just as excited to see Synergy perform as the dance group was excited to perform for everyone. For many in the audience, it was a pleasure to watch talented people who get so much enjoyment out of what they’re doing, one that appreciates these dancers for all the hard work they put into their craft.

synergy dance showcase
‘Viva Polonia!’ Brings an Empassioned Piece of Poland to Lyons
Everyone Should Know ‘What Every Girl Should Know’