Home » In College Sports, It’s the ACC and Everyone Else 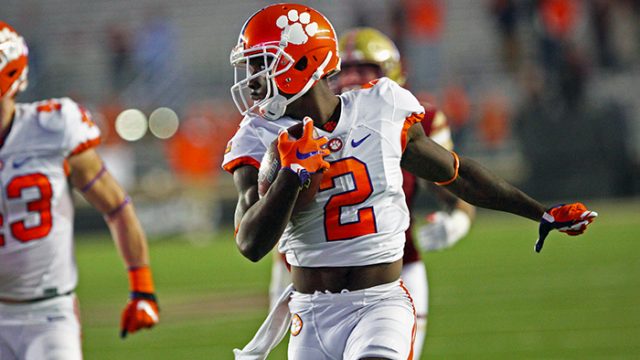 In College Sports, It’s the ACC and Everyone Else

Last week, Baseball America released its Preseason College Top 25 for the upcoming season. Despite coming one game away from the College World Series last year, Boston College didn’t get a nod in the rankings—or any Top 25 list, for that matter. It’s perfectly understandable, seeing as Birdball lost two of its three starting pitchers to the MLB Draft and their replacements remain a big question mark. Plus, the Eagles prefer when you bet against them.

But included in Baseball America’s rankings were seven Atlantic Coast Conference teams, by far the most of any conference. It confirmed what many who closely cover the conference already knew: that the ACC is the best conference in the country for every major sport in 2016-17, and that its dominance shows no signs of stopping anytime soon.

Before the die-hard SEC fans take out their pitchforks and my friends back in California cite the rise of the Pac-12, allow me to present some facts. I’ll start with the most disputable sports and move forward from there.

In college football, the Big Ten made a solid case for top conference in the nation, as four teams—Ohio State, Michigan, Wisconsin, and Penn State—had legitimate arguments for a College Football Playoff berth. But, as SB Nation’s Bill Connelly explained in a Dec. 19 article, the conference was simply too top-heavy in 2016. For only its five best teams, the Big Ten’s S&P+ rating was 20.7, best in the country over the SEC (18.7) and ACC (18.2). Looking at the entire conference as a whole, though, reveals a different story: The ACC (7.50) and SEC (7.49) are virtually tied, while the Big Ten sits in third place (6.65), just above the Pac-12 (6.03). In reality, this was a two-man race.

These numbers were only for the regular season, though. During the postseason, in what ESPN likes to call the Bowl Challenge Cup, the ACC separated itself from the pack. It finished 9-3 in bowl games—including BC’s thrilling 36-30 victory over Maryland in the Quick Lane Bowl—and totaled three more wins than the next best conference. It was the first time in over a decade that the ACC had outperformed the SEC in bowl season. The head-to-head success was consistent with the ACC’s regular season record of 9-6 against Power Five opponents. By comparison, the SEC went just 6-8.

The ACC even had the top-two finishers in the Heisman race while the SEC didn’t send a single representative to New York’s Downtown Athletic Club this year. And, in the National Championship, Deshaun Watson led Clemson on a last-minute touchdown drive against Alabama’s No. 1-ranked defense, lifting the Tigers to a 35-31 win and cementing their conference as the best in the country.

For collegiate men’s soccer, the debate isn’t quite as contested. According to RPI, nine of the 19 best teams in 2016 hailed from the ACC, including Ed Kelly’s Eagles at No. 18. The next-most represented conference was the Big East with three teams. Another strong soccer conference is the Pac-12, which lays claim to back-to-back national champion Stanford. In both 2015 and 2016, the Cardinal dealt blows to the ACC by defeating Clemson and Wake Forest, respectively.

Nevertheless, the ACC has still won five of the last 10 College Cup titles, while Stanford’s recent victories are the only two from the Pac-12 in the last decade. Top to bottom, the ACC is still leagues ahead of its West Coast counterpart, and it’s not even that close.

Like soccer, men’s basketball has also been largely taken over by the ACC. Since the turn of the century, the ACC has won four more national championships than any other conference. This year’s preseason poll featured five ACC teams in the Top 25, and the most recent rankings had six teams (the Big XII, SEC, and Pac-12 have three teams each). The depth of the conference has been on display all year, with low-level programs such as Georgia Tech beating Final Four contenders at the top. Upsets have become so commonplace that they barely grab the headlines anymore. Like ACC football, the competitive middle tier of teams are making the conference the most well-rounded and fun to watch in the country.

Sure, there’s debate over whether the conference can bring home a national title this season. Villanova, Kentucky, and Kansas all pose serious threats to the ACC’s stacked squads in Durham and Chapel Hill. But, once again, the ACC really has no competition when it comes to comparing the worth of the entire conference.

That brings us back to baseball. Opening day is about two weeks away, and it’s clear that another dominant year for the ACC is on deck. If the conference can finish with the most teams in the Top 25 at season’s end, it can claim that honor for every major sport in 2016-17, barring a collapse in ACC men’s basketball. When was the last time that happened?

I sifted through years of AP poll data only to find my suspicions confirmed: No other conference has ever finished an academic year as the most represented in the postseason Top 25 rankings in football, men’s soccer, men’s basketball, and baseball. The ACC has reached an unprecedented level of collegiate domination. It’s not only in men’s sports either—just look at women’s basketball, field hockey, or lacrosse. In each, ACC teams fill the Top 25 lists. With elite coaches, recruiting, and academics, it’s unlikely that a steep decline is on the horizon.

Even if the Eagles have struggled to stay afloat since transitioning to the ACC, there’s some consolation in recognizing that they’re playing in what could be the greatest all-around conference ever. For BC fans, that fact makes losing easier to swallow and winning all the more sweet. Add it to the painfully long list of moral victories for the Eagles, which must be leading the country in that category at this point.