Home » Previewing BC Basketball 2016-17: What to Expect Against Virginia Tech 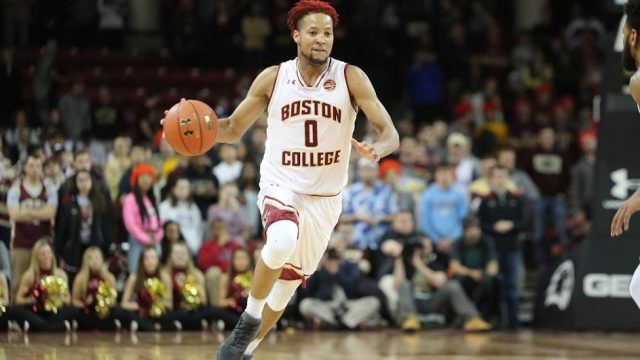 Previewing BC Basketball 2016-17: What to Expect Against Virginia Tech

For the first 30 minutes of Wednesday night’s game in Miami, Boston College men’s basketball looked nothing like the team that almost upset No. 9 North Carolina. BC has developed a routine of struggling offensively early and falling behind on the road. Wednesday night was no different against the Hurricanes in Miami. The Eagles accumulated only 22 first half points and had a 17-point deficit with less than nine minutes remaining. When BC falls that far behind that late in the game, fans have been accustomed to chalking it down as a loss. That, however, wasn’t exactly the case. The Eagles rallied from 17 points down, but still fell just short in their 78-77 loss to Miami.

Although they have kept their last couple of games close, the Eagles (9-12, 2-6 Atlantic Coast) are now on a four-game losing skid as they prepare for Virginia Tech (15-5, 4-4) in Blacksburg, Va., on Sunday night. In addition to its current losing streak, BC has lost 13 straight conference games on the road. While the record isn’t encouraging to many fans, this BC team is significantly improved from the team that lost all 18 of its ACC games just a year ago. For one, the Eagles have dependable players to lead the attack. Sophomore Jerome Robinson has taken major steps forward from his last year, and freshman Ky Bowman has proved he can handle the point and make big shots. Other contributors, such as A.J. Turner, Mo Jeffers, and Nik Popovic, have established their roles around Robinson and Bowman and created an identity for this team that didn’t exist a season ago. The Eagles are fun to watch again. But now with all of this talent and potential, they need to start winning games.

The Eagles will once again have their hands full Sunday night against the Hokies. Although the Hokies are coming off a loss against North Carolina, they have put together a very solid season thus far in the competitive ACC that has included an upset over Duke. Virginia Tech has a solid core that consists of strong senior leadership and a young nucleus. While the Hokies provide a balanced attack from several contributors, senior forward Zach LeDay is the guy the Eagles must focus on. LeDay leads the Hokies with 16.1 points per game, as well as averaging 6.9 rebounds and 1.0 block per game. Another impact player is sophomore Chris Clarke, who leads the team with 7.6 rebounds per game and contributes 12.3 points per game. While Virginia Tech has shown that many players can beat you on a given night, LeDay and Clarke play the biggest roles for this team, so the Eagles should be in good shape if they kept them in check.

Although the Eagles won the last time they journeyed to Blacksburg back in 2015, they will have their hands full against a Virginia Tech team that right now has its sights on the NCAA Tournament. BC has shown all year, however, that it can play with anyone in the ACC as long as it plays to its potential and limits self-inflicted miscues.

A weakness that has plagued the Eagles all year has been rebounding. The inability to secure defensive rebounds has been crucial in a few of BC’s marginal losses this season, in particular against North Carolina. The Eagles played a solid game on the glass in their loss to Miami, though, as they were only outrebounded by two. Meanwhile, Virginia Tech shared the same problems that BC had against North Carolina, as the Tar Heels dominated the glass 41-22 over the Hokies. This game presents an opportunity to command control of the game by controlling the glass against a team that also struggles in that department.

Controlling the pace of the game from the start will also be a major key to the Eagles’ success. Although it has become more prevalent on road games, BC has opened up many contests by shooting low percentages from the field and allowing quick 10-0 runs. It’s difficult to play catch up on the road in the ACC against a tournament-bound team. It’s crucial that the Eagles establish an offensive rhythm from the get-go and play a smooth and controlled game. BC needs to take smart shots, make the easy plays, and not turn the ball over, all aspects of the game it can control. Self-inflicted mistakes have forced the Eagles to lose their grasp on the game and allow their opponents to run away with games. If they can limit their own miscues, the Eagles will be in good shape.

The last key is one that seems so simple, but tends to fly under the radar and can be the difference in games: make your free throws. BC missed eight free throws and shot 66 percent from the line in their one point loss to Miami, so right there was the difference in the game. Overall, BC is not a strong free throw shooting team, coming in at just 67.3 percent as a unit. Excluding Jordan Chatman, who shoots a terrific 87.5 percent from the charity stripe, no one else on the team shoots above 75 percent. Robinson is just a 69.4 percent shooter, Bowman is 69.6 percent, and Turner shoots 72.7 percent from the line. The misses add up to a lot of points left at the line and, in these close conference games, can be the difference between a win and a loss.

A victory in Blacksburg to end a streak of four-consecutive losses, including 13 straight conference games on the road, won’t come easy. BC will need to play a great game all around to come away with a win. If the Eagles control their mistakes, they have chance to collect another win against a solid team in basketball’s best conference.