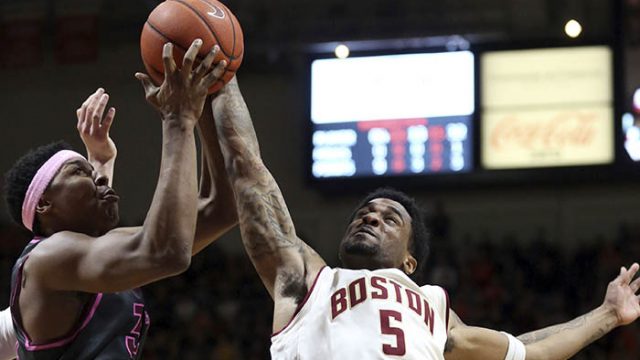 Boston College men’s basketball head coach Jim Christian often refers to Ky Bowman and Jerome Robinson as his team’s catalysts. After all, the underclassmen backcourt duo has been averaging close to 36 combined points in ACC competition.

But when the two North Carolina natives are misfiring, the whole team struggles to muster any sort of offense, digging the Eagles into a deep hole. And no matter how well they recover, the deficit typically proves insurmountable.

On Sunday night at Virginia Tech, the Bowman-Robinson tandem was invisible, which dug the Eagles into another hole—one that appeared fatal. That was, until Jordan Chatman started shooting the ball.

The 23-year-old graduate student drained 6-of-6 from 3-point land in the first half, lifting BC—which was once down 36-18—from its grave. Chatman went on to tally 30 points, hitting 9-of-11 from beyond the arc. Despite tying Dana Barros’ program record for 3-pointers in a game, Chatman’s performance will go down as just a statistic. And only that. Although his shooting frenzy jumpstarted the Eagles’ offense, it wasn’t enough to snap BC’s 700-day ACC road losing streak, as the Eagles fell to the Hokies 85-79.

VT (16-5, 5-4 Atlantic Coast) opened the half on a 16-6 run. Right from the start, its offense clicked. Ty Outlaw knocked down back-to-back treys and Seth Allen made an immediate impact, frequently penetrating the BC (9-13, 2-7) interior. Meanwhile, Bowman and Robinson looked disjointed. Halfway through the first half, Robinson took a seat on the bench with three fouls, and Bowman had yet to make a field goal (0-for-5).

While BC’s stars were faltering, the Hokies continued to fire away, sinking all but one of their first nine shots. Entering the game, VT had five players who averaged double figures. And against the Eagles, the depth was apparent. Whether it was Law, Allen, Justin Bibbs, Justin Robinson, or Ahmed Hill, the Hokies were lethal from the perimeter. Not only could BC not convert on the offensive end, but it also couldn’t get a stop, as the VT lead grew to 18.

The reserve 3-point marksman slowly began to find his touch. With each Chatman triple, the Hokies’ advantage budged. BC’s shooting percentage climbed back to respectability, and it was all thanks to Chatman. The 6-foot-5 guard refused to miss.

During a seven-minute stretch, close to the conclusion of the first half, Chatman accounted for 18 of the Eagles’ 20 points. He finished the half with 21, bettering his previous career-high by five.

But even with Chatman’s outburst, BC trailed by 11 at the break. Head coach Buzz Williams’ crew was not phased by Chatman’s outside shooting, answering with 3-pointers of its own. In fact, it was Bibbs who closed out the first 20 minutes of play with a deep, quick-release triple at the buzzer.

Once the second half commenced, Bowman and Robinson finally started to find a rhythm. The now-relevant pair of guards aided Chatman in chipping away at the deficit. Yet defensive errors allowed VT to carry over its dominant shooting from the first half. As a result, the game turned into a back-and-forth shootout.

Chatman drilled his first two 3-pointers of the half, drawing swarms of VT defenders for the remainder of the game. Every time he touched the ball, the Hokies’ crowd braced themselves. Chatman came into the game as an afterthought. Now, he was on the mind of all 7,372 in attendance. Because he drew so much attention on offense, others were left open.

Naturally, Bowman took advantage of the scoring opportunities. But soon, he turned to creating some of his own. Only down six points, Bowman stole a VT pass and broke away with electrifying speed for an emphatic one-handed slam. One possession later, the redheaded phenom netted a 3-pointer, bringing the Eagles within one.

But that’s as close as they’d get.

The Hokies’ selfless ball movement and efficient outside shooting persisted to hold off BC when it mattered. Another Chatman 3-pointer gave the Eagles’ one more chance to make a final plea for a road win. But, the shots weren’t there. With less than a minute to go, a couple of BC fouls sent VT to the charity stripe, effectively ending the game.

Time and time again, BC has shown that it can compete with anyone in the ACC—at least in the second half. If Christian’s “catalysts” can play to their potential for 40 minutes, this team’s progress will show in the win column. And it certainly won’t take a 30-point bench performance to keep it afloat.