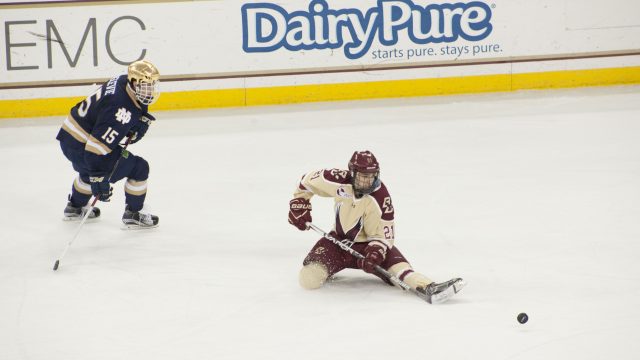 With Boston College netminder Joseph Woll possibly tired and facing breakaway after breakaway and giving up rebound after rebound on Saturday night, the Eagles needed offense from as many sources as possible. They got it, with three different lines contributing to the six goal output. In particular, the third line of captain Chris Calnan and freshmen David Cotton and Julius Mattila came through big time, and in big spots, too. Calnan potted BC’s first goal and later sniped home the game winner, while Mattila score the game’s tying goal.

“It’s really important,” BC head coach Jerry York said of the need to get production from his team’s depth. “We got a terrific performance out of Cal[nan]’s line.”

“We call them the magicians,” Calnan said of his rookie linemates.

One might expect the 5-11, 171-pound Finland native Matilla to be of more a magician than the 6-3, 204-pound Cotton, but Calnan’s label is more apt to Cotton. Mattila’s role is to chase down defenseman on the forecheck and chip on on defense, and he does that well. He can also bang in a one-timer from the slot as he did on his game-tying goal.

Yet Cotton’s hands and passing ability are what made that line so dangerous like it was against the Irish. It’s really hard to throw the Parker, Texas native a bad pass, which is a hallmark of a skilled player. He can also dime up teammates as well, which he did to both of his linemates. His last assist on Calnan’s go-ahead goal was his best, as he waited out the defense and found Calnan striding into the offensive zone behind the play. Notre Dame was too busy hustling back and keying in on Cotton to see the Eagles’ captain trailing the play, but Cotton saw him and waited an extra beat to feed Calnan as he came into the high slot.  His three apples on the night gives him 20 points in 28 games, which is pretty good for a third liner, let alone a freshman.

“You love playing with those type of guys,” Calnan said of his fellow power forward in Cotton. “He’s a tremendous player in all phases. He protects pucks well.”

“The seniors have really helped him,” York said. “They’ve brought him in and welcomed him into the team. He’s made steady improvements in his skating and checking ability. He’s developed into a solid player and we’re awfully glad he came this year.

BC and Notre Dame’s last regular season Hockey East matchup wasn’t like the last several, which is probably why BC finally prevailed. Irish head coach Jeff Jackson’s program had won four out of five in Chestnut Hill because his squads can usually force the Eagles to play Notre Dame’s structured, possession type of game. As the breakaways and odd-man rushes flowed both ways at Conte Forum, it was obvious that this wouldn’t be another one nights. Jackson’s team almost pulled out the win, anyway, but it wasn’t the tested formula for corralling BC.

“We were our own worst enemy a few times with some of the mistakes we made with the puck. That’s playing right into BC’s hands,” Jackson said. “They’re a great transition team.”

The Irish didn’t have much of a choice in playing that way, though, because they’re battling the same third opponent that BC has to deal with every game: youth. The Eagles should be more used to it, and they still have their difficulties in overcoming their inexperience, particularly on defense. Jackson and York can empathize with the stress that each one of them feels with when a freshman defenseman lets the puck skip over his stick at the blue line.

“Our team has more speed than it has in the past,” Jackson said. “We haven’t really changed anything per se. We can’t use youth as an excuse against Boston College because they are as young as anyone, but we are young.”