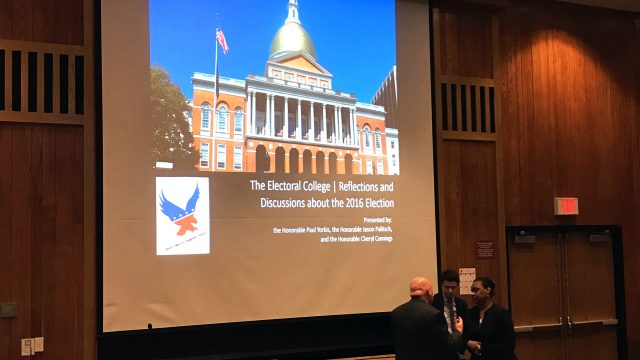 The Boston College Civic Engagement Initiative hosted a discussion with three members of the 2016 Massachusetts Electoral College on Thursday night. The members of the panel, which included The Honorable Paul Yorkis, The Honorable Jason Palitsch, and The Honorable Cheryl Cummings, all cast ballots for Hillary Clinton at the College’s meeting at the State House in December.

The Electoral College is composed of 538 members who are selected in each of the 50 states and the District of Columbia. They are distributed across the country based on each state’s population according to the most recent census. The 11 electors in Massachusetts, for example, represent the state’s nine seats in the House of Representatives and two Senate seats. During the 2010 census, Massachusetts actually lost a Congressional seat, reflecting a trend that has affected several states in the Northeast.

“I think it was partly because the population of America is getting older, and people who are getting older have a tendency to want to be in warmer climates,” Yorkis said.

The panelists explained how the Electoral College was created in part as a compromise to balance the view of each state with the view of regular citizens. The Founding Fathers wanted to ensure that a competent individual was elected to the presidency and to prevent the influence of foreign governments, such as Great Britain, on the leader of the new country.

“The college was created because of a compromise,” Yorkis said. “In fact, our entire government is built upon compromise.”

Each state has its own process for choosing electors. In most states, such as Massachusetts, the state political party organizations of the candidates select them. While all of the political parties in the states pick electors, only those of the party of the winning candidate become official members of the Electoral College.

Members of the Democratic State Committee in Massachusetts cannot publically oppose the nominee of the Democratic Party in partisan races. The state Republican Party has similar rules. For this reason, if somebody were considering not voting for their party’s nominee, they probably would not run for the position of an elector.

“If you become an elector and decided you will not vote for the person that you pledged to vote for, you will go down in history as a faithless elector,” Cummings said. “I can’t imagine anyone would really want that title attached to their name.”

But during the 2016 meetings of the Electoral College across the country, seven electors in three states defected and voted for other candidates. There were defectors from both the Democratic and Republican parties who voted for people such as Bernie Sanders, John Kasich, and Colin Powell. Faith Spotted Eagle, who received the vote of a defector in Washington, became the first Native American to receive an electoral vote.

“The college was created because of a compromise. In fact, our entire government is built upon compromise.”

All three panelists received hundreds of emails in the wake of the election imploring them to find a way to prevent Donald Trump from becoming president. Many of these concerned citizens, however, did not realize that the electors from Massachusetts were already pledged to Hillary Clinton. Palitsch also received attention from several notable media organizations for tweeting that the electors should receive intelligence briefings in light of the alleged Russian interference in the election.

Palitsch, however, maintains that while the United States should abolish the Electoral College at some point in the future, no action should be taken until two issues are addressed. First, he believes that every state should have to abide by the same voting rules and requirements. Palitsch believes that if this not achieved, certain states would take measures that would result in voter suppression in a situation where the Electoral College was abolished. Second, he thinks that significant campaign finance reform should be enacted in the wake of Citizens United before the country switches solely to the popular vote.

The Electoral College meeting in Massachusetts is one that is steeped in tradition and formalities. Men and women are expected to dress in black tie attire. Yorkis even donned a Tricorn hat for part of the ceremony, which is emblematic of the rich colonial history of Boston.

The Democratic State Committee also made a conscious decision to ensure that the diversity of the state was reflected in the diversity of the members of the Electoral College. The committee therefore selected people of different faiths and races, including Nazda Alam, who became the first female immigrant Muslim elector from Massachusetts.

A luncheon funded by the electors followed the ceremony at the State House on Dec. 19. While electors could be compensated up to $22 for their day of service based on the length of their commute, many refused the payout based on principle.

“I did not decline the check but I am not going to cash it,” Yorkis said. “I’m going to keep it as a souvenir.”