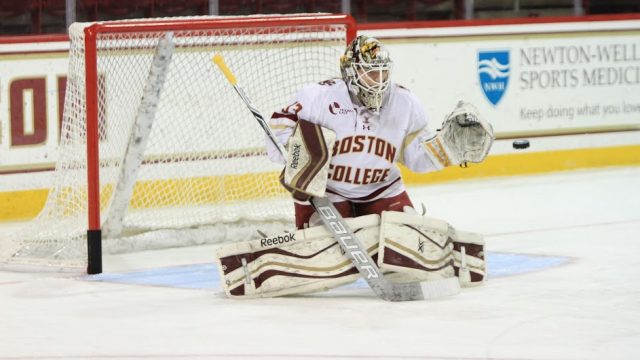 Well folks, it’s that time of year. Despite unseasonably warm weather and an unusual lack of snow, the Beanpot tournament has once again arrived.

Facing off against Boston University on Tuesday, Boston College women’s hockey (19-3-4, 15-2-2 Hockey East) is looking to continue its 14-game unbeaten streak to take home the coveted Beanpot trophy in a battle for nothing less than the pride of Boston. The opening game will determine who plays in next week’s championship game, facing off against either Harvard or Northeastern. With Beanpot victories in 2014 and 2016, the Eagles will be playing for their third championship in four years, attempting to climb the ladder to seven Beanpot victories.

The Eagles have been riding a wave of good play recently, remaining undefeated (12-0-2) through their last 14 games the longest streak in the nation. During that time, junior goaltender Katie Burt surpassed Molly Schaus for the program’s all-time wins record. Captain Andie Anastos and Makenna Newkirk have also been playing well, scoring seven goals in the last five games between the two of them.

BU (13-8-5, 8-7-4 Hockey East) is coming in on a less impressive record as of late, winning only one of its last six. The Terriers have been fairly consistent in their goal scoring, with contributions from the usual suspects—Victoria Bach, Mary Parker, and Rebecca Leslie have all notched multiple-point efforts, it just hasn’t been enough to emerge victorious against teams like Vermont, Providence, and Minnesota. The defense has also been struggling, allowing an average of 40 shots over the last eight games.

Last Time They Played: The last time these two teams faced off saw a 1-1 tie after a stellar, 45 save performance from BU goaltender Victoria Hanson. It was also a special teams slugfest, with 13 penalties served between the two teams. Each team’s respective goal came on the power play, which comes as no surprise considering each team spent about 10 minutes each with a man advantage. Perhaps the most important power play came in the overtime period, when BU’s Abby Cook served two minutes for slashing. Despite this power play and a 9-0 shooting advantage in the final five minutes, the game remained knotted at one as time expired.

If you include the five minute overtime period in these teams’ last bout, the Eagles outshot the Terriers 46-29. If BC can find a way to get as many puck on net as they did last time while limiting BU’s scoring opportunities, the Eagles can win this game. BC has a phenomenal goaltender in the rear and hard-hitting snipers up front, meaning that if the Eagles can finish their opportunities and prevent BU from playing offense, they can take home a W and advance to the championship game next week.