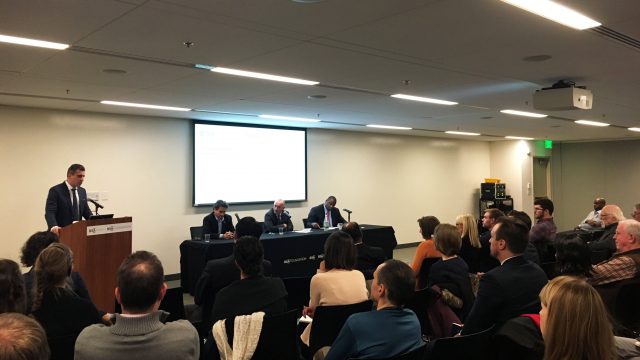 At a recent Boston Society of Architects panel, city council members Frank Baker, Bill Linehan, and mayoral candidate Tito Jackson discussed trends and solutions concerning the rising cost of housing in Boston. Between 2000 and 2016, the average rent increased by $1,500 in the Boston metropolitan area. As of 2016, only 18 percent of housing units in Boston were considered affordable, down from 40 percent of units in 2000. The decreasing affordability of housing in Boston is an issue that affects residents of the city and Boston College students alike.

Boston is undeniably a college town. Home to 35 colleges and a student population of about 152,000, the city is a hub for graduates seeking work and a place to call home. The continual rise in housing costs, however, has presented a barrier to many Boston-area undergraduates hoping to stick around after graduation. At the panel, Jackson reported that Boston loses 52 percent of its resident students because they simply cannot afford to live in the city following the end of their college careers.

High costs of living in the Boston area directly affect BC students. Living in a rental house off campus is a staple of the BC culture and experience for many during their junior year. But this move can come with an increased financial burden. Housing prices in Newton and Chestnut Hill are influenced by the housing prices and economy of the city of Boston itself, meaning that students paying rent to live off campus bear the brunt of increased industry and disproportionate real estate development.

In recent years, Boston has sought to attract a number of large corporations in order to expand the local economy and to increase its reputation as a city of innovation. In addition to General Electric’s recent announcement that it will soon relocate to Boston, Reebok and New Balance both now call Beantown home. While these new large employers may present positive economic benefits, they will also undoubtedly contribute to the rising cost of living in Boston as well.

The issue of the lack of affordable housing in Boston extends beyond affecting college students. A recent Brookings Institute study ranks Boston as the No. 1 city in terms of highest income inequality and the Boston-Cambridge-Newton locality as No. 6 among metro areas across the country. The development of further luxury housing rather than more affordable units will contribute to not only increasing costs of living, but also this growing gap between the rich and poor in the city. Boston area architects should focus on developing housing for a variety of income levels, rather than predominantly the upper class. This will help to mitigate the rising housing costs within the city and its surrounding municipalities.

Both candidates for the 2017 mayoral election, incumbent Boston Mayor Marty J. Walsh, WCAS ’09, and councilman Tito Jackson, have recognized the spike in Boston housing costs as an important issue. Walsh has put forward a plan entitled “Housing a Changing City: Boston 2030,” in which his administration proposes creating “53,000 new units of housing at a variety of income levels across the city.” Jackson has been an outspoken opponent of the rising cost of living in Boston and has criticized the Mayor for not doing more to combat wealth inequality within the city.

The lack of affordable housing in Boston and its surrounding area should be a central issue in the upcoming election. BC students would benefit greatly from policy and development that reverses the current trend of rising costs of living, especially those that currently live or hope to live off campus during their time at the University. Therefore, students eligible to vote for Mayor of Boston are encouraged to consider both candidates’ approaches to tackling the city’s mounting housing crisis.