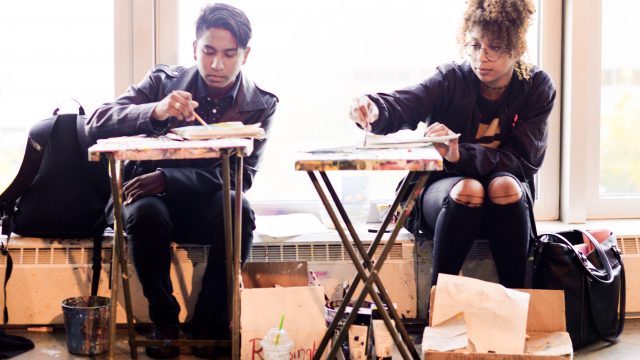 Artists for Humanity (AFH) is a Boston-based organization that trains and employs disadvantaged teenagers in art and design.

The organization gives these youths an opportunity to participate in the creative process and learn from experienced mentors.

AFH employs over 250 teens in paid apprenticeships that allow them to provide their artistic services throughout the business community. Many of the high school-aged teens come from underprivileged neighborhoods and low-income families. The responsibility of their job allows them to feel respected and valued as they begin to see what’s possible for their future.

In 1991, AFH was founded by Susan Rodgerson who noticed the Boston public school system was depriving students of a quality arts experience. Rodgerson noticed how eager the teens were to be creative and be part of the creative community.

Rodgerson—who currently serves as the organization’s executive artistic director—had the vision to take groups of teens from Boston’s most challenged neighborhoods and work with them to produce large scale collaborative artwork that could be sold to corporations, banks, and businesses. Rodgerson saw how art could give teens the opportunity to have a voice.

As a professionally trained fine artist, Rodgerson had been in the company of teens while working on collaborative projects and instantly felt an intrinsic rapport with them. Rodgerson recalls the teens having a hunger and thirst for something outside of what they knew.

“What you get when you work with kids is unlimited ideas and no boundaries,” Rodgerson said. “When you can cultivate that, sky’s the limit.”

AFH hosts two open houses every month, attracting dozens of teens who are interested in working at the organization. Rodgerson explains that those interested have the opportunity to tour the studio and see their peers at work doing activities. Anyone interested is offered an application but the process for the sought after job is quite rigorous.

After being put on a waitlist and undergoing numerous interviews, applicants are hired as vacancies open up. Rodgerson noted that AFH don’t necessarily look for teens with exceptional artistic talent, but instead for those who can make the commitment and show up on time three days a week after school.

While the organization is primarily centered around teens, there are opportunities for college students and graduates. Over the last three years, 100 percent of the teens employed by AFH have graduated high school and been accepted into college. Those that stay in the Boston area for college and are in need of  additional funds have the chance to work at the organization part time. After college, former members may even be recruited back to AFH as full-time mentors.

“Many of the teens we employ have little or no experience with the arts,” Rodgerson said. “Above all we look for teens who show intense commitment and devotion to the work.”

AFH is the largest onsite employer of teens in Boston—hundreds of pieces of work have been commissioned to an array of clients. The organization allows teens to explore their artistic talents in a variety of different studios to accommodate graphic design, photography, 3D design, and painting to name a few.

Come summer 2018, AFH will double the size of their studio facility and will serve over 500 teens in an ambitious expansion project. The studio’s upgrade will provide even more opportunities and living wage jobs to high school-age teens.

The expansion will include upgrades to the AFH EpiCenter, an event space where rental fees help fund the employment of the Boston teens. All together, AFH will be expanding their studio space by 52,000 square feet, ensuring even greater opportunities for the under-resourced teens.

Rodgerson attributes the organization’s impressive high school graduation and college acceptance rates to the ongoing tutoring program. The one-on-one sessions in math and science subjects take place four times a week, and help the teens academically. Rodgerson acknowledges that these sessions create a constant need for volunteers and tutors to keep the program running.

AFH is currently partnered with two arts colleges in Boston where teens can collaborate on unique and specialized art-related projects. In the future, Rodgerson hopes to look into a potential business entrepreneurship program with Boston College. She sees a joint effort between teens to participate in real life projects and in commercial enterprise.

“As Artists for Humanity looks into the future with our new space, we will continue to propagate interesting ideas with different universities.” Rodgerson concluded.