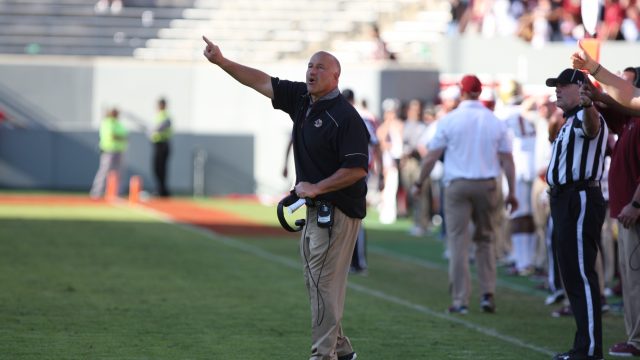 To celebrate, Addazio posted a video on Wednesday morning of his best Salt Bae meme impression, which quickly made rounds on the internet.

While BC’s recruiting class ranks at the bottom of the ACC, there are several pieces worth celebrating. Among the 20 new members of the program are two running backs, two wide receivers, three tight ends, two quarterbacks, two linebackers, and three defensive backs. There are two offensive lineman, one of whom is Alec Lindstrom, who joined his brother, Chris, on the Heights as a mid-year enrollee in January.

“He’s a little undersized,” defensive coordinator Jim Reid said during a special National Signing Day telecast on BCEagles.com. “But he’s been on this campus for two weeks and has already gained 10 pounds. He reminds us of his brother.”

For many of the new signees, football runs in the family. Tate Haynes, a quarterback for California’s Cathedral Catholic High School who may transition to defensive back for the Eagles, is the son of Hall of Fame cornerback Mike Haynes. Wide receiver Caleb Stoneburner—who Addazio praised as having a “great football name”—has a brother who played tight end in the NFL and defensive tackle TJ Rayam’s dad, Thomas, also made it pro.

“The apple doesn’t fall far from the tree,” Reid said of Rayam.

One of the most intriguing recruits is 6-foot-4 athlete C.J. Lewis. He doesn’t have an official position yet, but Addazio said that he’d like to work him out at wide receiver. Lewis’s size and strength prompted Addazio to compare him to Clemson’s Mike Williams during the National Signing Day press conference.

Two key additions on defense are defensive backs Brandon Sebastian and Ben Stewart. Sebastian, rated the No. 1 corner in Connecticut by Scout.com, received rave reviews from the coaching staff for his quickness and footwork. Stewart, on the other hand, is a hard-hitting bruiser who earned Indianapolis Defensive Player of the Year honors last fall.

“If you’re a parent on the other team, you’d want this guy arrested,” Reid said. “He’s got an opportunity to be the state wrestling champ as well.”

While the recruiting reach into the Midwest was limited to just Stewart and Stoneburner, Addazio did pull a pair of recruits from California. Haynes, along with tight end Patrick Brown, rounded out the class as the final two additions on Wednesday morning. Addazio raved about the new “pipeline” he is beginning to develop between California and Chestnut Hill, specifically the newfound connection with Cathedral Catholic, the alma mater of Haynes and current sophomore Ray Smith.

Most of the new players, though, still hail from the New England and Mid Atlantic regions. Addazio and his staff—particularly first-year assistant coach Anthony Campanile—continued their push into New Jersey with four recruits from the Garden State. Paul Theobald Jr., a 6-foot-2 linebacker from Seton Hall Prep in Caldwell, N.J., could earn playing time as a freshman in an elite front seven unit.

But Addazio doesn’t expect too many freshmen to make immediate impacts next season, as the Eagles’ depth will allow for more redshirting to maintain an extra year of eligibility. Dillon, however, will be an exception. The former Michigan commit has the speed, strength, and shiftiness to compete for playing time in his rookie campaign. Not to mention he was taught by the best: His high school football coach,  Paul Zukauskas, was a standout offensive lineman at BC and is immortalized in the program’s Hall of Fame.

Whether he adjusts to the tempo of ACC football or picks up the playbook fast enough is still in question, but the talent is undoubtedly there. Although the 2017 recruiting class is ranked last in the conference and 66th nationally by Rivals.com, the prospect of Anthony Brown and Dillon in the backfield for the next four years is certainly exciting for BC fans.