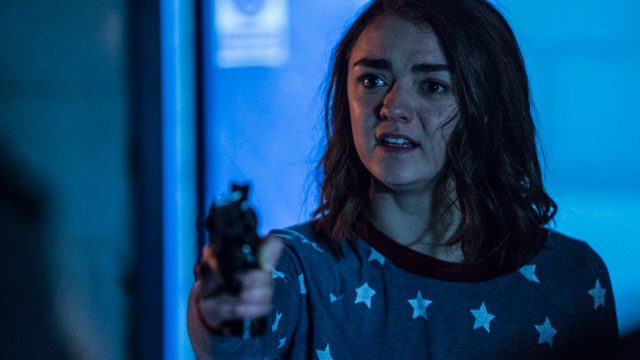 Netflix’s ‘iBoy’ Explores Hopes and Fears in the Digital World

iBoy is one of the latest Netflix original installments, starring X-Men: First Class’ Bill Milner and Game of Thrones’ Maisie Williams. These two young actors make the script come alive with their excellent chemistry onscreen, resulting in a combination of compelling, playful, and serious sequences throughout the film. While the film does explore the fantastical and technological, it is deeply rooted in older established ideas regarding good and evil.

iBoy focuses on the life of Tom (Milner), a teenager growing up in London. After walking into his friend Lucy’s (Williams) house to study, he finds it has been broken into and she has been attacked. As he flees the scene, her attackers chase after him and shoot him as he has his phone up to his ear, trying to call for help. Both Tom and Lucy survive the incident, but not without consequences. Part of Tom’s phone that he was holding to his ear as he was shot, entered his brain. These phone parts lodged in Tom’s brain give him powers to see and control pieces of technology including phones and computers.

The way the film displays these powers is absolutely breathtaking. As Tom is able to hack into cell phones and gains access to the devices, the audience can see text messages, missed calls, and all sorts of information stored on the phone as Tom sorts through it. The movements and motions are extremely fluid, mirroring that of a computer screen, just without the borders that would inhibit it. The information that is whizzing on and off the movie screen seems to move at the speed of light and is able to handle various tasks at once. Because Tom has this device in his head, it is as if the audience has a front row seat to the inner workings of a human computer and all of the intricacies that play a part within it.

As visually stimulating as the film presents itself, the idea of this boy vigilante having the ability to hack into phones and computers to do whatever he wishes is frightening. This superpower, which includes listening in on phone conversations, looking at texts messages, adding or subtracting money from online accounts, and even causing phones to spontaneously shock their owners is terrifying. While the last example may be a little far fetched, the other three are well within the bounds of hacking capabilities today. Though today individuals are not able to hold pieces of phones in their brain and control devices with their thoughts, they are able to use their minds to help them crack codes to get into private and important information.

This film presents how technology has become an integral part of how people go about their day-to-day lives and highlights its pervasiveness in our society. Technology defines how people communicate with each other, not to mention influencing where we travel, what we wear outside, and our health.

In providing us with convenient services, certain applications like to know personal information to create a individualized product, ranging from preferences to credit card info. With cookies, our previous searches are monitored and given out so we can receive ads that apply more directly to us to increase the likelihood one will click on the ad that appears on their screen. While this can be useful and often helpful to have one’s information sorted and custom-made to fit, as the film suggests again and again, it can be frightening that all this information is centralized in one or two places.

Though the idea of a phone getting stuck in someone’s head giving them superpowers may be a little far fetched, the ability to hack into people’s devices and turn their lives upside down is well within reach. Some would say much of the information people put out into the world today is not as private as one might think.