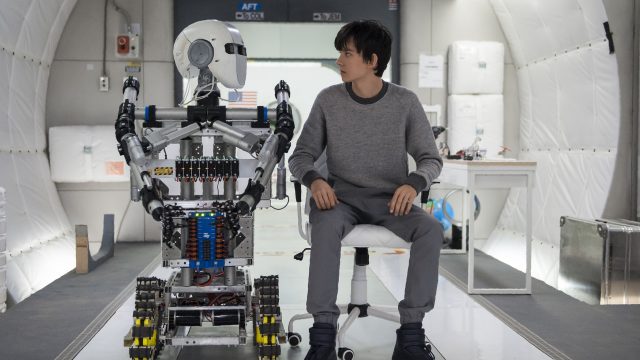 No Distance Proves Too Great for Love in ‘Space Between Us’

Many students can relate to the difficulty of long distance relationships. How can you stay connected when separated by potentially vast distances? In The Space Between Us, the characters have to maintain a relationship separated by 250 million miles.

The film opens on the day of a space shuttle launch, carrying six astronauts to Mars to establish a permanent colony. The launch is successful, but during the voyage, the lead astronaut discovers she’s pregnant. The decision is made to have the baby in space, and while the baby lives, the mother does not make it. The story jumps 16 years ahead, and the baby is now a teenager named Gardner Elliot (Asa Butterfield). Gardner’s only connection to Earth is through Skype conversations with a high schooler named Tulsa (Britt Robertson), though he has only told her he is sick and stuck in a New York penthouse. The opportunity comes for him to go to earth and he takes it. Upon arriving, however, Gardner is subjected to medical tests, which show he will be unable to stay on earth. Being the romantic that he is, he escapes the testing site and finds Tulsa. Together they go on a road-trip adventure across the Western United States in a desperate attempt to find his father. All the while, they are chased by the scientists at NASA who want to bring Gardner back to save his life.

The high point of the film is the acting. Butterfield has established himself as one, if not the premier young actor in the business, and he gives a powerful performance as a boy in a world that no matter how badly he wants to be part of, he just doesn’t understand. But more impressive than his emotional performance, he physically carries himself as someone who has never walked on Earth’s gravity. Robertson gives a compelling performance as a young adult with trust issues, who is torn between cynicism and appreciation for the world around her. Playing the leader of the space program, Gary Oldman is his usual stellar self, conveying a man full of ambition, regret, and love. He is being ripped apart on the inside, but does his best to keep up his facade.

Despite the skill of the acting, the biggest knock on this film is its script. It gives the actors relatively little to work with in terms of dialogue. Almost every line utilizes telling, not showing. There is little room for subtlety, with every metaphor brought back innumerable times. In several instances, such metaphors are jarringly forced into shots, which comes off as cheap and unimaginative. The biggest example of the lack of subtlety is that Gardner’s illness is literally having too big a heart.

The shots of space are beautiful and extremely well done, but one of the most impressive things is the director’s ability to convey the beauty on earth as rivalling or being greater than that of space. The aerial shots in this film are outstanding and put you in Gardner’s shoes as someone who is in awe of the world around you.

The funniest bits of the movie are when Gardner is faced with customs and traditions on earth that he just doesn’t understand. They are simple in many cases, but touching nonetheless. He freaks out when he sees a horse for the first time, marvels at hot air balloons, and dances in the rain. The audience was in an uproar when he tried to use ancient courting videos to make Tulsa fall in love with him. A telling conversation in the film occurs when he blurts out at her: “You are the most beautiful girl in the world.”

She corrects him saying people on earth don’t just tell other people their inner, most true thoughts because “then we’d all be happy or something.”

The Space Between Us is far from perfect, but it is charming and sweet. It is hard to not instantly fall for the two leads. Every character in the film is trying their best and cares about the other characters in the film, which in some way makes the movie feel too mushy. It has a runtime of over two hours, but given the proper emotional investments, the minutes truly fly by. But The Space Between Us is much like its main character—endearing, but perhaps with just too big of a heart.