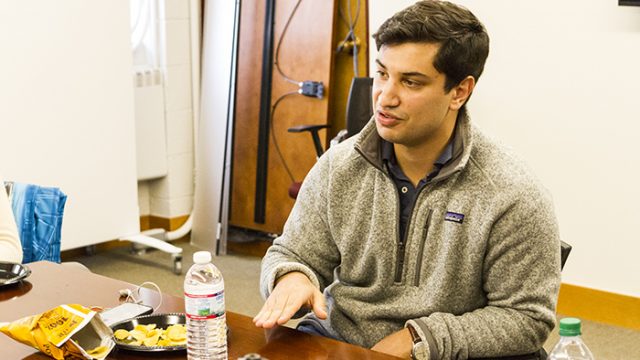 Matt Shapiro, BC ’14, landed the dream CSOM job without a CSOM degree. He studied political science at Boston College, but has worked for Google since his graduation. Speaking with students at the Shea Center for Entrepreneurship’s “Lunch with an Entrepreneur” series, Shapiro addressed his formative experiences as a student, as a young professional, and as an account manager at Google.

Despite studying political science, Shapiro’s experience with BC’s Tech Trek program convinced him that he wanted to pursue a career in business. After his sophomore year, he secured an internship at A&E Network, but quickly realized that it wasn’t for him.

“I realized that TV was very much an aging industry,” he said.

Going into the next summer, he was determined to find an internship with a tech company. After numerous applications, interviews, and rejections, he finally accepted an offer at Cloud Technology Partners. Shapiro did not think that Cloud was a “sexy” product to be in, but as a college student, he took the only job that he received an offer for that summer.

His internship with Cloud, however, became immensely useful. The company was still small while he interned, which gave his role enormous flexibility.

“I entered under a marketing role but ended up doing a lot of sales work as well,” he said. “For internships, I can’t recommend working for a start up enough.”

Since then, Shapiro has used his experience in both sales and marketing at Google. He spoke highly of the unique sales environment at Google and how it allows him to work closely with local companies. He first worked with Google as an Account Strategist for their small business sales.

Because all companies must use Google’s services to succeed, Shapiro acted as more of partner than a traditional salesman. He helped companies optimize their business, as the more they grew, the more they spent with Google.

“We were really just entrepreneurial consultants, working with the manager of your local pizzeria or the marketing manager of a start-up,” he said.

Since then, Shapiro spent a three-month rotation with Google’s small business marketing team and then moved to his current role as an account manager.

He spoke to the difficulty of marketing within a large company, and how that convinced him to stay in sales.

“In such a huge company it was hard to execute on any marketing campaign because there were so many stakeholders,” he said. “Every single email that had to be sent out had to be approved by the legal team, approved by the creative team, and then actually written and produced.”

Shapiro also praised the work-life balance and company culture that Google provides. He particularly values Google’s “20 percent project,” which allows employees to spend 20 percent of their time working on whatever project that they want, no matter its relation to their job title.

This allows employees to explore future roles for themselves in the company. Shapiro’s work on his 20 percent project led to his rotation in a marketing position. The 20 percent rule doesn’t, however, mean that things are easy, Shapiro said.

“Since everyone at Google is so type A, it’s essentially a 120 percent project,” Shapiro said.

Despite that, he said that it’s still possible to fulfill the job, pursue a side project, and keep the work week under 45 hours.

He advised current students, especially seniors, to remain adaptable as they enter the job market. The skills gained in a first job are more important than the job itself, he said. Shapiro emphasized the difference between the first job and someone’s career.

That mindset becomes especially important if one doesn’t immediately get his or her ideal job. Shapiro noted that he was lucky to get his ideal job and that several companies worse than Google rejected him.

Shapiro also spoke about the importance of soft skills and learning on the job. He said that critical thinking, interpersonal skills, and the ability to work on a team are all essential, maintaining that the technical aspects of the business can all be learned on the job. Because of this, he thought that his political science degree helped set him apart from other applicants.

During a brief Q&A period, several students asked about the start-ups Shapiro worked with at Google and what separated the successful ones from the rest. He said that good start-ups execute well and get things done quickly. They avoid the red tape and delays of larger corporations. They know their product, who they are marketing to, and how to push it to market.

“No matter what job you do, you are going to have stakeholders, and you will have to win them over,” Shapiro said.