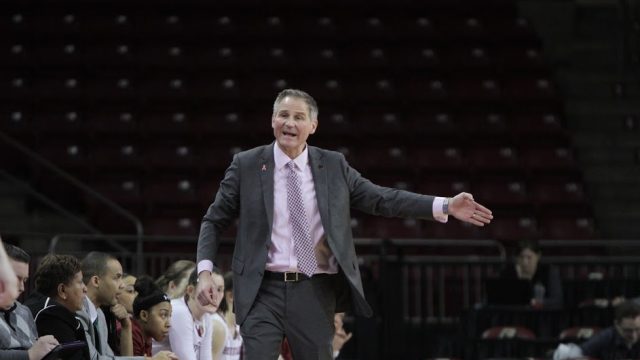 Peterson, Syracuse Torch BC in Blowout

Alexis Peterson caught the ball at the top of the arc. She paused and considered her next action. Then, gracefully, she launched a perfect 3-pointer, yet another early nail in the coffin for Boston College women’s basketball. Just five minutes into play, Syracuse University held a 15-2 lead over the Eagles.

It didn’t get any prettier for BC after that. The Eagles had to play catch-up all game, weighed down by the slowest of slow starts, and never managed to make the game competitive. Peterson, Briana Day, and Brittney Sykes dominated the scoresheet, while Georgia Pineau was the only Eagle to finish with double digits in scoring. Syracuse extended BC’s losing streak to 10 consecutive games after dominating the Eagles for a 70-47 win.

Syracuse (17-7, 8-3 Atlantic Coast) controlled the game from the very beginning, jumping out to a quick 10-0 lead before the Eagles (8-16, 1-10) could find the basket. BC finally broke into the game more than three minutes into play when Mariella Fasoula laid the ball into the hoop.

But Fasoula’s basket did not spark an offensive flurry for the Eagles. Syracuse went on another run, outscoring BC 12-4 over a four minute period. Peterson contributed seven of the Orange’s 12 points over this stretch, knocking down a three, a layup, and a couple of free throws.

At the end of the first quarter, BC trailed 26-9. Already the Eagles had allowed the Orange to collect eight offensive rebounds and score nine second-chance points—a tendency that would follow BC throughout the rest of the game.

“Syracuse’s ferocity on the boards, I thought was the difference [in the game],” head coach Erik Johnson said after the game.

The second quarter was the most competitive part of the game for the Eagles. Syracuse entered the quarter holding onto a 17 point lead, but BC managed to cut into the deficit early in the quarter as the Orange struggled to score for three and a half minutes. Pineau, who finished as the Eagles’ leading scorer, opened up the quarter by shooting 2-for-2 from the charity stripe. Fasoula scored next for BC, followed by another couple of free throws for Pineau. Emma Guy’s layup officially brought the Eagles back to trailing by single digits.

But after that, Day and Peterson contributed a layup and a three, respectively, to break Syracuse’s scoring drought and cushion its lead. Over the remainder of the second half, the Orange outscored the Eagles 11-4, bolstered by accurate 3-point shooting from Peterson and Julia Chandler. Heading into the locker rooms, Syracuse led 40-22.

At halftime, Peterson’s statistics were already impressive. She was perfect from beyond the arc and from the free throw line. She had 17 points, four assists, six steals, and four rebounds. None of her teammates had scored more than six points in the quarter. All together, the Orange hauled in 24 rebounds in the half, including 10 offensive boards for 11 second-chance points.

In the second half, Syracuse began to break away in earnest. Sykes, Day, and Peterson scored all of the points for the Orange in the third frame. Syracuse showed off its offensive rebounding prowess throughout the third quarter, including one possession that saw four straight offensive rebounds from Sykes, Day, and Peterson. With four minutes to go, the Orange had jumped out to a 52-30 lead.

The final four minutes of the quarter were slow as both teams struggled to score. Sykes and Peterson contributed a three and a jumper, respectively, and Pineau drove through the lane for a layup, but that was the total offensive output from both teams in the final minutes of the quarter. Despite Syracuse’s relatively slow stretch, the game was already far out of reach for BC. Heading into the final quarter of play, the Orange led 57-32.

Nothing changed for the Eagles in the fourth quarter. Chandler made two straight 3-pointers early in the quarter to boost Syracuse’s momentum even further and put BC in even bigger of a hole. Pineau continued to be the lone bright spot for the Eagles in the period, but her efforts could not make the game competitive again. As time expired, trailing by 27 points, Martina Mosetti attempted a 3-pointer that didn’t fall. The buzzer went off, and mercifully BC was spared from any more time playing against Peterson and Co.

While BC looked lost on the court against the Orange, it’s important to note that the Eagles actually outperformed some of Syracuse’s past opponents. Syracuse leads the nation in forced turnovers, averaging 23 per game. The Eagles’ ball-handlers protected the rock well, finishing with just 16 turnovers. Regardless, it wasn’t a pretty game for the Eagles.

“Syracuse showed why they are a legitimate top-20 team,” Johnson said. 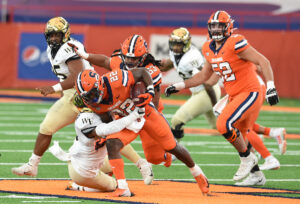 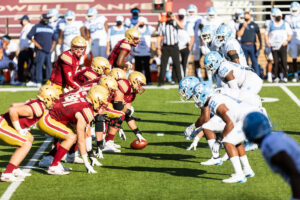