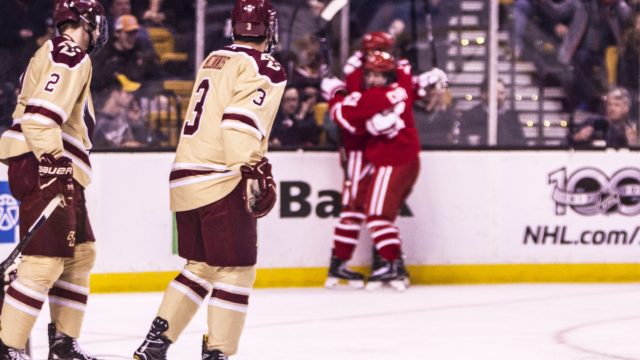 BOSTON — Boston College men’s hockey reclaimed all the momentum it needed to continue its Beanpot title defense. And Clayton Keller took it all back.

The Eagles opened their 273rd meeting against Boston University—this one in the opening round of the 65th Annual Beanpot Tournament—with an awful first period. They failed to notch a shot until Ryan Fitzgerald’s at the 18:50 mark. Thanks to a Chad Krys goal, not much changed to start the second.

But, in an instant, the lights came on for BC. Forwards and defensemen alike began bombarding Jake Oettinger with shots, setting up rebounds begging to be put home. And Austin Cangelosi, at last, took advantage. The feisty center reeled in a deflection off Oettinger caused by Fitzgerald and screened by Matthew Gaudreau. Better yet, BC drew a power play after holding call on the game’s first goal-scorer, Jakob Forsbacka-Karlsson.

But Keller broke away from Luke McInnis. And with it, several streaks fell apart.

“We’ve got to find a way to score goals against BU,” York said.

Forsbacka-Karlsson got the scoring started two minutes into the first frame. Patrick Harper tried a wraparound that caused Colin White to fall to the ice while attempting a hip-check. Somehow, Forsbacka-Karlsson firmly planted himself in front of Scott Savage, boxing out the senior defenseman in front of the net. JFK pushed the puck past Joseph Woll to give the Terriers a 1-0 lead.

Led by Charlie MacAvoy, Doyle Somerby, and John MacLeod, the Terriers gave the the Eagles all they could handle defensively in the opening frame. They routinely pushed BC forwards out of the way or down onto the ice when planted in front of Oettinger. The Eagles were forced to the outside on shot-after-shot. And York wasn’t pleased with his team’s sense of urgency.

“I thought the first period we played very tentative,” York said. “Not the way we’ve been playing the last month of the season.”

Cangelosi, a senior center, offered a more biting indictment of his team’s performance to open the game.

“They were winning pucks and we weren’t,” Cangelosi said. “The first period was unacceptable.”

And in the second, the Eagles did find that magic they’d been hoping for. Just not soon enough. After a Chris Calnan roughing call, the Eagles’ penalty kill couldn’t keep up with BU’s tough defensemen. Krys rocketed a shot from the right circle. Aided by a screen from Harper and Patrick Curry, Woll was forced to the right, giving Krys the room to find space over his left shoulder.

Cangelosi’s goal and a JFK penalty gave the Eagles that momentum. But Keller, the No. 7 overall pick of the Arizona Coyotes in this year’s draft, showed why the Terriers aren’t just a defensive team. Unlike most shorthanded goals, the Eagles didn’t have a broken play. Keller simply took advantage of freshman defenseman Luke McInnis. Using that superb speed, Keller left him and Woll all alone. A quick ole move around BC’s goaltender gave the Terriers a 3-1 lead. And, unlike if the goal was on a broken play, York found this result simply unacceptable.

“We had full possession, we dumped the puck in the zone, and we just failed to retrieve it,” York said. “That bothers me. It’s a puck retrieval. We’ve got to be better in that area.”

Still, after a two-shot first period, the Eagles put up 16 on Oettinger in the second. The BU goaltender consistently gave up rebound after rebound, leaving plenty of opportunities for the Eagles to get back in the game. Yet as each puck fluttered off Oettinger’s pads, it landed into open space instead of a BC stick.

“We know that we’re not going to get many, so when we do get our opportunities, we can’t pass them up,” Cangelosi said. “We’ve to bear down and find a way to score.”

Yet in the third, the Eagles reverted to their first-period ways. In total, BC had a mere four shots in the game’s final frame. A huge part of that was because of several penalties. McInnis, White, and Gaudreau (twice) each spent time in the box. WIth a man down for eight minutes, there was little hope for a comeback.

Despite the nonconference Beanpot loss to BU, BC will remain on top of Hockey East. The Eagles have a three-point lead on the second-place team—you guessed it, BU—and are in the driver’s seat. With five games to go, they have what should be a gimme home game against Merrimack, before they invite No. 15 Vermont for two and have a home-and-home with No. 9 Massachusetts Lowell. And, if things break well, they should have a stronghold on a good seed in the NCAA Tournament, as they’re up to No. 7 in the PairWise Rankings.

But they’ll have to settle for a consolation showdown with Northeastern. And though York’s famed “Trophy Season” will get off to a poor start, the importance of next Monday’s game isn’t lost on BC.