There was no way New England Patriots fans were going to let a simple matter like the weather deter them from attending the Super Bowl LI Victory Parade on Tuesday morning.

No, fans were crowding the streets of the Patriots’ parade route hours before the first duck boats appeared, even as heavy snow and hail blanketed the sidewalks, soaking fans through their coats. Two years ago, after the Patriots defeated the Seahawks in Super Bowl XLIX, a huge snowstorm postponed the parade by a day. With the snow only starting on Tuesday morning, this parade remained on schedule—just windy, wet, and cold.

On Boylston Street, across the road from the Boston Public Library, fans passed the time before the parade approached by posing for photos together, chanting, and tossing small blue foam footballs back and forth. The chants most often included praise for Patriots quarterback Tom Brady, the MVP of Super Bowl LI. Some chants, however, were directed at embattled NFL commissioner Roger Goodell, who has become Public Enemy No. 1 in Boston following his treatment of Brady over the “Deflategate” scandal. One fan, Ian Smith, said he wanted to see Goodell at the parade.

“[I want Goodell to] come over here,” Smith said. “See what happens when the Patriots win the Super Bowl.”

Smith, a Wellesley, Mass., native, arrived at Boylston Street around 9:45 a.m.—almost two hours before the parade was scheduled to begin at. Wearing a Patriots hat with an American flag draped around his shoulders, he paced up and down Boylston St., blowing into his vuvuzela and riling up his fellow fans. He emphasized that the camaraderie amongst fans was his favorite part of the parade.

“The amount of people here today is insane,” Smith said. “Just everyone being here, strangers coming up, high-fiving each other … everyone wearing jerseys, screaming ‘Brady, Pats,’ it’s awesome.”

The parade officially began at 11 a.m., but did not pass the Library until after 11:30 a.m. When the first duck boats approached, and fans caught glimpses of several of the Lombardi trophies from the Patriots’ five Super Bowl victories, the noise level skyrocketed.

The parade processed past the library over a span of almost half an hour. Huge speakers placed on the backs of some of the vehicles boomed music to the fans, with the playlist ranging from Migos’ “Bad and Boujee” to The Outfields’ “I Don’t Want to Lose Your Love Tonight”. Every so often, red, white, and blue confetti was shot into the air, mixing with the snow and falling down on the fans. While every vehicle in the procession elicited huge cheers from the crowd, the biggest applause was saved for the biggest names.

As Brady’s duck boat passed, fans restarted the chant they’d been saying intermittently all morning: “Brady! Brady! Brady!” Brady smiled and waved at the crowd, even catching a blue foam football that someone tossed at him. As his duck boat approached the library, he moved to the back of the vehicle and hoisted the Patriots’ most recent Lombardi Trophy into the air, prompting even louder cheers from the fans.

For Dorchester native and lifelong Patriots fan Stephen Bousby, the opportunity to see the team was his favorite part of the parade. He was stationed along Boylston St. before 9:30 a.m., ensuring that he’d have a good view of the champions as they passed.

“Just seeing the team, and the support the city has for the team, that’s great,” Bousby said.

The crowd certainly connected with the players. One fan pressed up against the barrier had brought a white Patriots football and a Sharpie, which he tossed up to various players as they passed. The athletes signed the ball, then tossed the Sharpie and ball back to the fan. At other points, players sprayed champagne into the crowd, pointed at fans, posted selfies with fans on their Snapchats, and danced along to the music.

One memorable moment in the parade came when a fan tossed a beer can to Amendola. Amendola cracked it open, downed the beer in a matter of seconds, and flung the can back in the air, leaving fans to compete to see who could catch it.

In all, the parade followed a two mile long route, leaving from the Hynes Convention Center and ending at City Hall. Fans packed the entire route, ensuring that the atmosphere was energetic and enthusiastic the whole way through.

“It’s a great environment to be here,” Smith said. 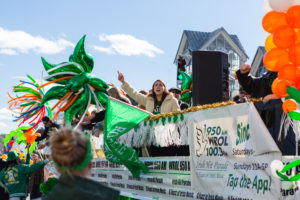 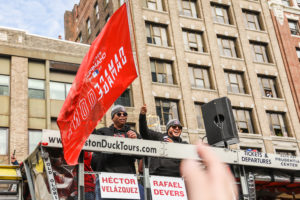