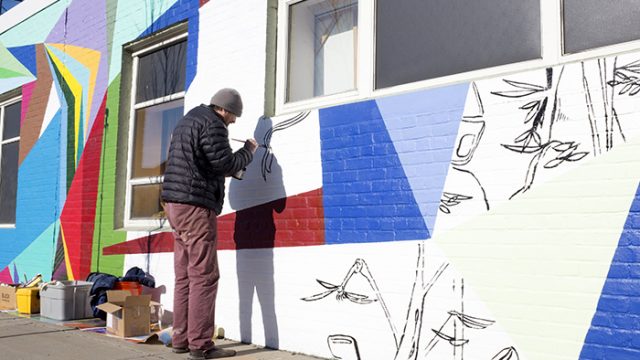 Instead of a large, blank, white expanse facing the street, 395 Western Avenue in Allston has become a riot of color. Strong blocks of bright blues, purples, pinks, and greens interspersed with sections of delicate monochromatic illustrations jump out of those who walk by on the street. The mural, which will debut on Feb. 18, is the work of David Teng Olsen, a current assistant professor of art at Wellesley College.

Titled “Evo,” this 170-foot-long piece is colorful, asymmetric, and eclectic. It is thought-provoking, both an evolution and a departure from Olsen’s previous, more illustrative murals. “Evo” was commissioned and supported by a number of large community initiatives. Among them was Isenberg Projects, a commercial real-estate group that is a “creatively-driven marketing company with a primary focus on attracting people to places.” Olsen explained that Emily Isenberg, the founder of Isenberg Projects, was the first to contact him about the project, asking last November if he would be willing to paint a mural for them.

“Evo” is hardly Olsen’s first rodeo. An accomplished painter and digital media artist with experience painting larger projects, Olsen’s previous mural works include “Rain Shadow,” a large freehand mural at Peninsula College, “Explosions in the Sky” at Wellesley, and “Prince Myshkin,” at the Montserrat Gallery. His style is defined by bold geometric shapes, selective, and attention-grabbing use of color, and themes grappling with modernity, philosophy, and society.

The themes come, in large part, from Olsen’s life experiences. He originally graduated from the University of Washington with a degree in biology, and spent several years working in laboratories as a bioengineer and textbook illustrator. Tasked with drawing out complex experiments and concepts, Olsen found the work fulfilling, even if it lacked a certain element of creativity.

“The research we were doing tackled some very important social issues,” Olsen said. “I felt like I was doing good, meaningful work.”

Olsen explained that although he enjoyed his work, he noticed that he enjoyed the creative side much more than the scientific side. Olsen’s father was an artist, and Olsen himself had studied art as an undergraduate, so he left science for art and received a B.F.A. from Washington and an M.F.A from the University of Wisconsin at Madison.

That change, Olsen says, was one of the best decisions of his life. But he hasn’t abandoned his biology background. Instead, Olsen leverages it to improve and inspire his art, as many of the themes apparent in his pieces are connected to those he examined while working as a bioengineer.

While “Evo” shares some of its artistic inspirations and themes with Olsen’s previous work as a bioengineer, it represents a number of firsts for him.

“For one, the process went by really quickly,” Olsen said. “From the time they first reached out to me to the last day of painting, it took, what? Three months?” He recalled his other projects taking twice as long to set up.

Olsen originally planned for “Evo” to be completed over the summer of 2017, but both Isenberg and Zone 3—a creative urban planning program run through Harvard University and Graffito SP that “explores experimental programs, events, and retail along Western Ave” in Allston—requested that the work be finished sooner. What was supposed to be a six-month project was, effectively, condensed into half the time.

“It’s not easy, painting a mural in January,” Olsen said. “It’s a whole new challenge in freezing temperatures because you have to keep the paint warm.”

To solve the problem, Olsen relied on a jerry-rigged set of covers and heaters and unusually friendly weather. With winter months light on rain and snow, Olson acknowledged his luck.

When drafting “Evo,” Olsen was intrigued by the ever-changing nature of Allston itself. Originally a hub for railways and stockyard-based shipping, the neighborhood took on a drastically different feel after both industries declined. Now, it’s a hub for innovation and commercial activity. Olsen named the mural after the concept of social and historical evolution because “it tries to capture the short amount of time when past and present collide.”

In dealing with the community of people surrounding the mural, Olsen praised them as one of the most active, involved, and memorable groups with whom he has ever worked.

“I always like to incorporate and include the community into my artwork in some way,” Olsen said. “After all, I’m doing them a service in the end. And everyone I worked with and worked for were just fantastic.”

In some of his previous pieces, Olsen took requests from passersby and painted them straight into the work. For “Evo,” he worked with Isenberg Projects to meet local schoolchildren and teach an afterschool arts workshop. With them, he shared his experiences as an artist, talked about the creative process, and led coloring book activities.

“I was really impressed with some of those kids,” he said, “and they were all really interested and engaged.”

In addition to working with Isenberg Projects, Olsen was also contacted by the Zone 3 Initiative for the mural.

Zone 3’s mission has thus far manifested itself in art exhibitions, temporary storefronts, movie screenings, and community-centered classes. “Evo” wouldn’t have been possible at all, Olsen said, if not for Zone 3.

“They were great to work with, and [Zone 3] was a huge part of helping me connect with the people the mural would be impacting on a daily basis,” Olsen said.

If “Evo” is anything to go by, let us hope that it is not the last we see from David Teng Olsen. 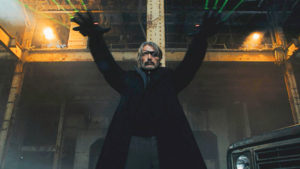