Home » Islam Means ‘Submission to God,’ According to Bowering 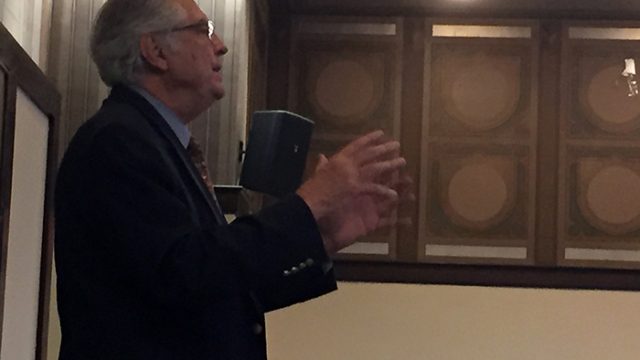 Islam Means ‘Submission to God,’ According to Bowering

Gerhard Bowering, a professor of Islamic Studies at Yale, brought Boston College professors, Jesuits, graduate, and undergraduate students together this Wednesday for another installation of the Gasson Lecture Series, run by the Jesuit Institute.

Bowering spoke about his personal understanding of Islam, breaking it down into two parts: the legal interpretation of obligations essential to the understanding of the faith and the personal spirituality of one’s connection to God.

He started by explaining the five obligatory pillars that most Muslims identify their religion by: the profession of faith through recitation of the Shahada, the daily prayer ritual of the Salat, the giving of alms through charitable acts, the act of fasting, and the completion of a pilgrimage to Mecca. Although these pillars hold equal weight in the practice of Islam, Bowering spends most of his time on three in particular that really catch the essence of the faith.

While explaining the Salat, a recitation of the Qur’an completed five times a day in the direction of Mecca, Bowering emphasized the importance of the rhythm and sense of routine this practice gives to the life of Muslims.

This dedication, he pointed out, is central to the faith.

The prayer is preceded by a cleansing of the self, most often of the face and hands, before entering the space in which one directly connects to God by speaking his own words from memory, in the original Arabic.

He argued that during the prayer, the kneeling and bowing to touch one’s forehead to the floor is important, because it reaches the core of Islam.

“Islam does not mean peace as is often said,” he said. “Islam means submission, or submission to God. Surrender.”

That being said, one ends the recitation with sharing peace to one’s prayer companion, whether the companion is in the same room or across the world.

He moved on to discuss how fasting during the month of Ramadan is an integral part of the faith that requires sacrifice and dedication, especially in the hot summer months.

“When I was living in a Muslim country in my youth in Pakistan … I tried to practice it for five days and then I gave up, because I couldn’t do the work any longer,” Bowering said. “It was simply too hard to do and to put it into practice.”

Bowering, although personally understanding of the difficulty of completing the act of fasting annually, recognized this as a requirement for one’s fulfillment of his or her duty toward God in the Islamic faith.

He described the final of the five pillars, the two-day pilgrimage to Mecca during the season of Hajj, most symbolically. Bowering recalled how the pilgrims come from around the world to reach the Mecca and begin their preparation: men shave their heads, cleanse and perfume themselves, and put on the universal, white dress.

He retold the journey of the pilgrims in their circling of Kaaba, touching of the black stone of Istilam, stoning of the Devil in Mina, drinking of water from the well that allowed the initial creation of Mecca, and honoring of God in multiple other ways throughout the trip.

Bowering referenced a secondary purpose of the pilgrimage.

“The ritual has deep significance for Islam … because it brought [the] international Muslim community together,” he said. “It was totally egalitarian. Everybody, whichever color or language he had, was in the same dress.”

After emphasizing this global community, Bowering closed the speech by shifting to the personal aspect of spirituality that is often forgotten when Islam comes to mind.

He praised this half of the faith as the way an individual can bridge the divide between oneself, the created being, and the creator in a moment of enlightenment and ecstasy in a trance-like state.

“You have annihilated your own self, and the divine self alone exists in you,” Bowering said. “You have become one with God.”

Bowering explained that in this disappearance of self-consciousness, the individual achieves his or her ultimate calling in life. He described this as returning back to the time prior to human creation where all humans were only specks of light, without material existence, and one with God.

While Bowering recognized that he will return to this relationship with God once his time on earth is complete, his current ability to spiritually travel back to this pre-existence to experience oneness with

God allows him to tap into his own immortality while still on Earth.