Home » LTE: A Response to “The Outdated ‘Dating Assignment'” 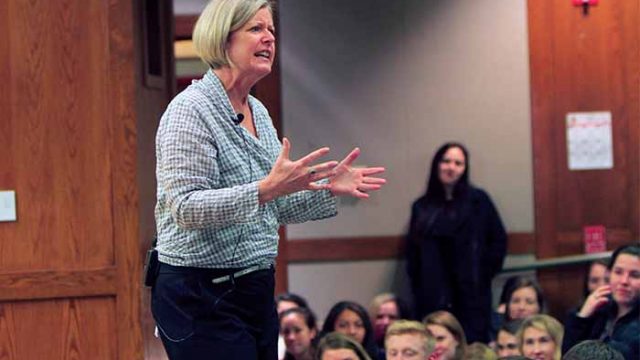 LTE: A Response to “The Outdated ‘Dating Assignment'”

In her recent op-ed, Rachel Loos suggests that Boston College’s popular “dating assignment” is a “desperate scramble to reestablish the archaic forms of romantic relationships” and “a way for the older generation to control young peoples’ [sic] lives.” Her implication—that there’s some sort of coercion going on—couldn’t be further from the truth. Loos has clearly never attended Kerry Cronin’s annual talk. She hasn’t witnessed how, year after year, BC’s largest lecture hall fills up so quickly that students have to sit in the aisles and stand in the doorways. She hasn’t felt the buzz in the air afterwards, as the hundreds who came of their own accord exchange excited reactions.

True, there are some at BC who aren’t looking for anything beyond a casual hookup. Maybe they’re like Loos, who claims the knowledge that “[she’d] just had sex!” regularly left her “empowered, brave, and confident.” That’s great. But have they reflected about the other people involved in their encounters? Perhaps these others don’t feel quite so empowered and brave. Perhaps they were hoping to be something more than a stepping stone on the path to another person’s “self realization and confidence.”

Loos cites Hanna Roisin’s Atlantic article, which claims that having “boys on the side” is good for female empowerment. This turns out not to be true. In her response to Roisin, Emily Esfahani Smith, also writing for the Atlantic, marshals an impressive array of research that shows “the balance of power in the hook-up culture lies with the men.” Women are more likely to regret a hookup, to wish it hadn’t happened, and to wish it had developed into a committed relationship. They’re more likely to feel like “jungle gyms” than equals on “the sexual playground.” This dynamic is especially prevalent on campuses (like BC) where gender ratios are skewed, creating a “surplus of girls and a scarcity of guys.”

Loos’ column is as self-contradictory as it is misguided. She reveals that she’s in a monogamous relationship herself, undermining her claim that students are uninterested in such “archaic” setups. She also pretends to worry that “asexual, aromantic, and polyamorous” individuals are excluded by an emphasis on dating and relationships. Of course, if Loos were as good of an ally as she paints herself to be, she’d know that asexual people can and do form successful romantic relationships (see asexuality.org, the website of the Asexual Visibility and Education Network). In her haste to accuse the University of ostracizing a vulnerable group, she ends up committing the very offense she claims to abhor.

BC students are smarter, more compassionate, and more selfless than Loos thinks. People here want to participate in relationships that allow for spiritual and intellectual growth. They want to give of themselves in a genuine way. They don’t want to use other people or be used. Kerry Cronin and those like her tap into this moral energy, bringing out the best in our community. Rachel Loos’ small-minded column appeals to us at our very worst.