On Saturday afternoon in Atlanta, Boston College men’s basketball let the game slip right through its fingers against Georgia Tech. The Eagles have struggled to close out games all year and this game was no exception, a 65-54 defeat to the Yellow Jackets. Saturday marked the ninth-straight loss for the Eagles, making it exactly a month since its last win.

BC (9-17, 2-11 Atlantic Coast) jumped out to an early lead thanks to ice-cold shooting by Georgia Tech (15-10, 6-6), but the Eagles couldn’t capitalize on offense, going into halftime with only a seven-point lead. The Yellow Jackets came out onto the court in the second half as a new team and tore apart the Eagles defense, outscoring them 50-32 in the half.

It seems as if whenever BC is playing, a player on the other team has a breakout performance. In this case it was Georgia Tech’s Tadric Jackson. Jackson is a 6-foot-2 guard and is a remarkable outside shooter. Going into Saturday’s game he only averaged 10.4 points per game. He scored 29 points, a career high, against BC. He shot 12-of-21 from the field and hit two of his five from beyond the arc. His dominance did not really start until the second half. Jackson got off to a slow start much like the rest of his team, but once he started making shots his hot hand could not be stopped. Part of this career high performance can be attributed to the weak Eagles’ defense allowing the Jackets to score 65 percent from the field in the second half.

Jackson made four of his first six shots in the second half, helping the Yellow Jackets get out of their slump. He knocked down a crucial 3-pointer toward the middle of the second half that cut  BC’s lead to one and gave the crowd life. As the crowd erupted in cheers, the rest of the Georgia Tech team started to feed off of his near-perfect shooting. Both Lambers and Okogie used Jackson’s momentum and ended the game with a double-double. Jackson, who came off the bench, is not normally the guy that Georgia Tech goes to when it needs a playmaker, but he shined through on Saturday evening. BC did not have a single stand out performance, which made it difficult to compete with Jackson and Georgia Tech.

In the second half when the Yellow Jackets began to make their shots, there was little BC could do to stop them. The inability for BC to build up a larger lead when they had a chance, caused Georgia Tech to rally back and take the lead with minimum effort. Not taking advantage of their opportunities caused BC to lose control of the game.

Coming into the game, the Eagles knew that they had to tighten up their defense if they wanted to come away with a win. In the first half, the defense played fairly well. They hustled up and down the court and contested every Georgia Tech shot. They held Georgia Tech to only 15 points and 17 percent shooting in the first half. During the second half, the BC defense broke down. They allowed GT to score a total of 50 points on 65 percent shooting.

After the Yellow Jackets took the lead, BC’s defense stopped playing. A game that was close for the majority of regulation ended as an 11-point victory for the home team. The frustration on defense showed as Jerome Robinson fouled out near the end of regulation. Georgia Tech began scoring easy layups that had been contested by BC in the first half. In the final minute, Okogie finished a slam dunk that erupted the crowd and deflated the Eagles. As they walked off the court at the end of the game, Robinson & Co. knew that if the BC defense could play a full 40 minutes, the result might have been different.

georgia tech men's basketball aj turner jerome robinson jordan chatman
Georgia Tech Uses 50-Point Second Half to Overcome BC
Which Celebrity Would You Ask on a Date for Valentine’s Day? 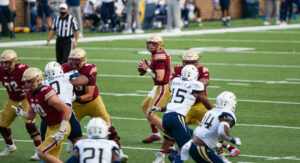