Home » ‘Righting Historical Wrongs’ Exhibit Confronts the Past With a New Perspective
Arts, On Campus

‘Righting Historical Wrongs’ Exhibit Confronts the Past With a New Perspective

It becomes easy, when studying historical events, to think of people of the past as being inferior—they spoke differently, held different morals, and made mistakes that we would never make. Adults teach children about the past so to prevent history from repeating itself, yet it often does. And soon, future generations may look to us to learn what not to do. Understanding this notion, the history department, in conjunction with the the O’Neill Library, has constructed an exhibit titled Righting Historical Wrongs at the Turn of the Millennium, in an attempt to celebrate the contemporary propensity to confront past global injustices. Located on the third floor of Stokes Hall, this semester-long exhibit features an array of charts and visualizations that explain or address how recently, society has looked back into the past in an attempt to confront prior mistakes.

One of the first charts in the exhibit serves as a sign of hope and optimism. Since the 1980s, there have been an abundance of movements dedicated to promoting the need for historical justice, by acknowledging former injustices. These movements, however, found their footing for a number of complex reasons, including the collapse of many communist and military regimes. Sprawling across the chart is a symphony of polychromatic lines, connecting various countries on a world map. These lines showcase a network of researchers on nation-specific injustices. For instance, a line stemming from the United States and pointing toward Bosnia, signifies an American group the researches the Bosnian War. This chart is mesmerizing and completely engrossing, as it forces the viewer to confront numerous, known and lesser-known, atrocities. In addition, the chart offers hope to its viewer, as the sheer abundance of connecting lines demonstrate the benefits of conducting research in the globalized modern world. A graph situated under the map expounds the benefits of globalization, as the chart exhibits how the number of publications dealing with “Historical Justice” or “Historical Memory” has risen drastically since the early 1990s.  This chart, in many ways, epitomizes the entire exhibit, as it provides valid evidence for the increased interest in facing former atrocities that may have been swept under the rug otherwise.

Farther down the long corridor hung another map that shows progress, while also indicating a need to take further action to correct injustices. This world map is covered with symbols of trees and pushpins, signifying land holdings of indigenous people across the world. This visualization of the strife of native people requires the viewer to question his or her role in this injustice—even if our forefathers were the ones who fought, slaughtered, and stole from them, we must still confront these issues so to engender justice. These small green trees and pushpins scattered across the U.S. serve to remind the onlooker of the continued strife of the Native Americans, and more so, our damaging contentedness with this situation. This map makes it obvious that the Native Americans still have not received their due land back, as the caption located under the map reads, “Canada, Australia, and New Zealand … have been more willing than the U.S. to return land rather than insisting on full and irreversible monetary settlements.” Thus, it seems that due justice can only be achieved by a showing of compassion by future generations of people—the hindsight we are graced with should, theoretically, give us a reason to act, since we know that prior generations have not done enough.

After a flurry of thoughtful charts, photographs, and maps, the exhibit ends with a simple question: “What unredressed mass atrocities need our attention?” Here, students are offered a chance to inscribe, on a dry-erase map of the world, the names of injustices that may not be widely known. As more and more students attend this exhibit, the map will surely fill up. This final stop, by design, left a bittersweet feeling—this barrage of atrocities is overwhelming and personal. While many of the names listed were widely known (Rwandan Genocide, Transatlantic Slave Trade), some were more obscure (Sami Oppression in Sweden, Tamil Genocide in Sri Lanka). As more people begin attending this exhibit, these lesser-known injustices will surely garner more attention from people and, hopefully, will become less obscure in time. If anything, this exhibit thoughtfully implores each of us to grab hold of the past before it slips from our grip and becomes out of reach.

Exhibit o'neill library
Bublé Attest to a Timeless, Dynamic Love in ‘I Believe in You’ Video
A Scathing Critique of Grammys Red Carpet Fashion 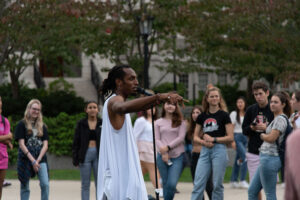 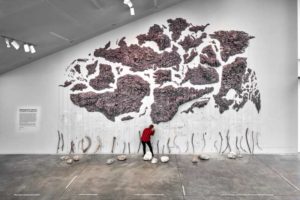