In his book The Rocks Don’t Lie: A Geologist Investigates Noah’s Flood, David Montgomery analyzes the truth in the Biblical story of God’s mass extinction of His creation. Montgomery’s book tells the story through religious and geological viewpoints, following the history of the Earth. On Thursday, during an event hosted by the environmental studies department, Montgomery spoke to students about his book.

Montgomery, a geomorphologist, studies the physical structure of Earth to interpret the past. He was inspired to research the ancient-flood legend when doing fieldwork in Tibet, where he found evidence in the rocks of the Namcha Barwa mountain range of a massive flood.

When Montgomery told the locals they were living on the site of a catastrophe, he was surprised to hear that they already knew. The lamas at the local temple had an oral legend describing the event in detail. The revelation that a local story he probably would have dismissed as myth earlier was rooted in truth was astonishing, and inspired him to look for truth in other stories.

People ranging from 16th century theologians to modern creationists have been on the same quest as Montgomery for centuries. Young-earth creationism—believing in a literal interpretation of the Bible and a young, 6,000-year-old Earth—is a growing phenomenon, he said.

Proving Noah’s Flood has been a cornerstone of the creationist argument for centuries. There were an abundance of different theories from where such a catastrophe could come, but most disproved by the clergy-scientists centuries ago. Most of science is trying to disprove people’s theories, Montgomery said.

“That’s what geologists like to do—we like to shoot holes in each other’s theories, argue about things, [and] try to find new evidence and data,” he said.

It’s the hypothesis that stands up through vigorous scrutiny that can eventually be considered truth, according to Montgomery. All theories based on a literal reading of the Bible quickly crumbled when probed.

In the early history of the Church, before science and religion were seen as inherently incompatible, theologians like Thomas Aquinas and St. Augustine dismissed a literal reading of the Bible and attempting to bend reason to fit a certain interpretation. Aquinas saw nature as “God’s other book” that they came from the same author, and so must tell the same history.

Montgomery explained the view of changing interpretation to fit facts, instead of the other way around.

“If you have an example of something you can observe, and learn, from looking at nature, and it conflicts with something you interpret and read in the Bible, maybe you should be reconsidering that interpretation as opposed to what you’ve learned from nature,” he said.

Science and religion aren’t inherently incompatible, but work together to explain the world, according to Montgomery.

The Bible often contradicts itself within the stories themselves, he said. These inconsistencies were explained in 1872 when George Smith translated Assyrian tablets excavated from the remains of an ancient library. He discovered that the crumbling tablets contained a story similar to the Biblical flood story. The Genesis story is actually a composite of ancient pagan legends, rooted in true stories of localized, but still devastating floods. To the ancient people living in the affected area, a massive flood would have wiped out their entire known world, leading to the misconception of a global flood.

Modern creationists, however, have abandoned the history of Aquinas and Augustine in favor of a willing blindness that confirms their own ideas, according to Montgomery. This is a pattern throughout history, on the sides of theologians and scientists alike.

“There is a long history of interpreting evidence through the filter of the theory that you’re trained to see things through,” Montgomery said.

Now, the resurgence of modern, young-Earth creationism is based on a cherry-picking of facts to support an argument that was rejected by church officials centuries ago. Montgomery’s book is an attempt to share the true history of modern fundamentalism and science and show how science and religion can work—and have worked—together.

“The war between science and religion is better viewed as a conflict within religion over how to view science,” he said. 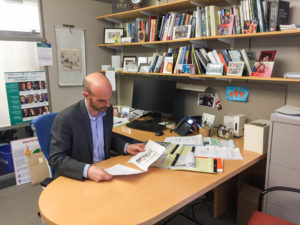 5 COMMENTS ON THIS POST To “Through Noah’s Ark Story, Geologist Balances Science, Religion”