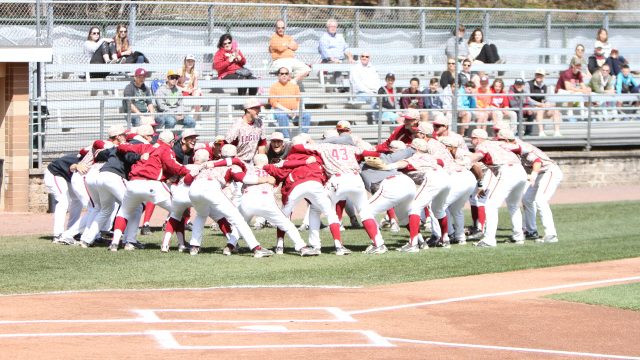 Alex Trezza may have the toughest job on campus this spring.

The first-year associate head coach in charge of pitchers and catchers for Boston College doesn’t have the same staff that his predecessor, Jim Foster, developed during the team’s 2016 campaign. First off, he’ll be missing Justin Dunn and his 97 m.p.h. fastball on Saturdays, as the right-hander was taken 19th overall by the New York Mets back in June. Dunn began the season in the bullpen before transitioning into the starting role, where he became the fire that fueled Birdball’s Super Regional run.

Trezza will also be without Mike King, who went 8-4 last season with a 3.04 ERA, enough to earn a 12th-round selection by the Miami Marlins. King’s precise command was reflected in his ability to maintain a low pitch count and consistently eat up innings. Additionally, Jesse Adams and John Nicklas both graduated, with Adams joining the Cincinnati Reds organization in the 14th round of the MLB Draft. Together, those four veteran arms combined for more than half of the Eagles’ 35 wins last year.

To make matters worse, the team announced the year-long suspension of sophomore relief pitcher Thomas Lane for a violation of team rules last week. As a mid-week starter from last year, Lane was perhaps best-prepared to fill these vacancies in the rotation.

What they left behind was a young pitching rotation with only one certainty: Jacob “Bear” Stevens, the bonafide ace of the staff who needs no introduction. As a freshman, Stevens ascended to the Friday night starter role after leading the nation in ERA for much of the season. Showing no signs of regression this year, the 6-foot-3 right-hander made the opening day start for BC on Friday against Bethune-Cookman, tossing six shutout innings and striking out seven.

Questions still remain, however, about the No. 2 and No. 3 options for Trezza’s crew. During Bethune-Cookman season-opening sweep of Birdball over the weekend, sophomore Brian Rapp and junior Dan Metzdorf started the Saturday and Sunday games, respectively. Rapp lasted just 2 2/3 innings, allowing three runs and throwing away three wild pitches, one of which proved costly in the 6-5 loss. Metzdorf, a lefty submarine pitcher, fared slightly better on Sunday, conceding seven hits, three walks, and three earned runs in 4 2/3 innings of work.

Last year, Rapp (5.67 ERA) and Metzdorf (8.00 ERA) started only one game each, making them interesting candidates for the weekend starting roles this season. And their shaky performances against the Mid-Eastern Athletic Conference school did little to erase doubts about their ability to take the mound against elite ACC programs.

In college baseball, it’s as much about the talent of a rotation as it is how cleverly and effectively it is used. Foster and head coach Mike Gambino were constantly tinkering with the rotation and bullpen until they finally achieved the right balance last year. Dunn abandoned the closer job in favor of starting duties, Adams moved to the bullpen as a middle reliever, and Stevens changed from Sundays to Fridays in an attempt to give BC an advantage in conference series.

If the Eagles want to reach the same level of success as last season, they need to be equally flexible about their roles—and even more willing to make risky adjustments when they hit rough patches. After an 0-3 start, that time may come sooner than expected. And Trezza may not have the same weapons at his disposal that Foster was gifted.

Keep away from the panic button, though. Last year, Stevens emerged from relative obscurity to piece together one of the best freshman seasons in the country. Could Birdball be hiding another Bear who might come out of hibernation this spring?

Unlikely. But there are some intriguing arms who could fill the void left after Stevens on Fridays. Sophomore Zach Stromberg has been steadily improving since joining the bullpen unit, showing flashes of starting potential along the way. As a freshman, the Lafayette, Calif.-native made three starts in 17 appearances, posting a 0.84 ERA in six ACC outings. On Saturday, he started the 2017 season on the right foot, striking out a pair of Wildcats in two scoreless innings of relief.

Bobby Skogsbergh, Birdball’s junior captain, will undoubtedly be an X-factor for the Eagles this year—the question is in what role. Last year’s team leader in innings pitched, Skogsbergh is currently the closer, but that could change soon. If he plays like he did last season, when he led all relievers with a 2.64 ERA, he could be considered for a promotion to the starting role, like Dunn last year. On the other hand, nothing in the closer’s role is guaranteed. The position can be emotionally taxing, as carrying the hopes of the team on your shoulders in the final inning is more of a burden than a blessing. On Friday, the pressure showed for Skogsbergh, who allowed two runs in the bottom of the ninth and blew his first save opportunity of the season.

The most Stevens-esque prospect, though, is freshman Matt Gill. The 6-foot-5 right-hander garnered rave reviews over the offseason and appears poised for a breakout season. The son of an All-American pitcher, Gill earned All-USA Connecticut First Team honors in high school after amassing a 7-1 record with a sub-1.00 ERA. Trezza should test Gill early in the season with mid-week starts against nonconference opponents to see how quickly he can adjust to the pace of Division-I baseball. If he passes with flying colors, he’ll likely be a frontrunner for a weekend starting job come ACC play.

Knowing who to plug in, when, and for how long is certainly  not easy. Plus, Trezza’s task is complicated by the surplus of underclassmen on his hands. But if he can develop talent like Foster and tweak the bullpen until everything clicks just right, Birdball can have a serviceable rotation before the conference slate arrives. Otherwise, the Eagles’ fundamental identity of having consistently strong pitching is at risk of extinction.