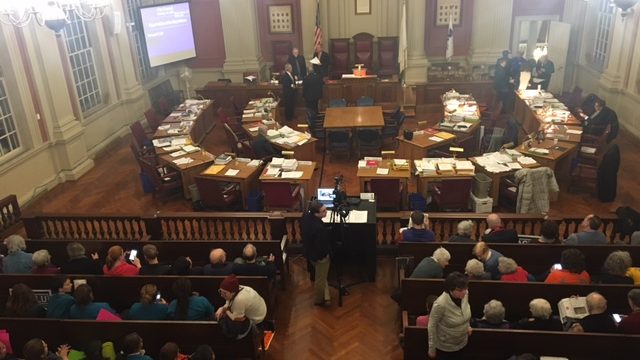 Residents packed the doors leading into Newton City Hall prior to the City Council meeting on Tuesday night. Throngs of people lined the steps and sidewalks, including members of the Jewish Labor Committee and former Newton Mayor David B. Cohen. Some wrapped themselves in Pride flags, with “PEACE” stamped across the rainbow banners. Others held signs, in both English and Spanish, declaring “We are All Immigrants,” “Newton Welcomes Immigrants,” “Welcoming city = safety for everyone,” and “Immigrants are what make America great.”

When the doors finally opened about 15 minutes before the start of the meeting, in flooded Newton citizens. People filled each seat, lining each side of the room—the Council room was so overflowed, the balcony became packed to the brim.

The crowd came out in support of an amendment to Newton’s Welcoming City Ordinance. The Welcoming City Ordinance makes Newton a sanctuary city, protecting unauthorized immigrants from arrest and deportation by the federal government. Many cities across the country have passed similar ordinances in reaction to President Donald Trump’s executive orders on immigration. As addressed in an preliminary meeting regarding the ordinance earlier in the month, councillors stressed that ordinance will not make Newton less safe, as cities like Cambridge and Boston have had similar ordinances in place for years, and remain as safe as they were before. The amendment to the Welcoming City Ordinance was successful, as 16 of the 24 councilors voted “yea”—one voted against, and the other seven were absent—garnering a standing ovation from the crowd.

According to the reports docket for this meeting, the goal of this amendment to the Welcoming City Ordinance is reaffirming Newton’s commitment to fair treatment for all, and to codify current community policing practices. The docket stressed that one of the city’s most important objectives is to “enhance relationships with all residents and make all residents, workers and visitors feel safe and secure regardless of their immigration status.”

Another goal of the amendment is to ensure that “no city official will request or seek information regarding a person’s immigration status,” and that “no city official will report to, respond to or cooperate with Immigration Customs Enforcement with regard to status of any persons who has contact with a city official or employee except in the case where that person has been convicted of a felony, is on a terrorist watch list, poses a serious substantive threat to public safety, or is compelled to by operation of law except as required by law.”

After a brief recess, Mayor Setti Warren presented his State of the City address. He started off his address by giving thanks to the City Council, activists, and community members who came to codify the ordinance. His view is that this ordinance has promoted what Newton has been doing and practicing for many years, and that it will continue to keep everyone safe. Warren explained that ordinance has “the right outcome for everyone in the city,” and it represents “people, resonance,” and “[people] coming together with [their] legislative body.” He recognized that we’re in a “complicated environment” and that it takes “patience and understanding” to make decisions for the city of Newton.

Another point Warren emphasized in his address was the Newton solar array project. Newton will be installing solar panels, and the city will divert energy savings made through the use of panels to low-income residents, as the residents will receive a discount on their energy bills.

Newton’s carbon footprint has been cut in half since he has taken office. Warren noted that the income gap in Newton is growing, and this initiative would help take some of the stress off low-income residents.

“Climate change is a threat to all, and we can play a significant role in the environment while saving taxpayer money,” Warren said.

An earlier version of this article stated that the vote was 17-0 with seven absences. The actual vote was 16-1. The article has been changed to reflect this error.

newton sanctuary city
Boston Ethical Community Discusses One Month of Trump
Who Would You Thank in an Oscar Acceptance Speech?