Home » No. 5 Notre Dame Pulls Away From Eagles After First Quarter 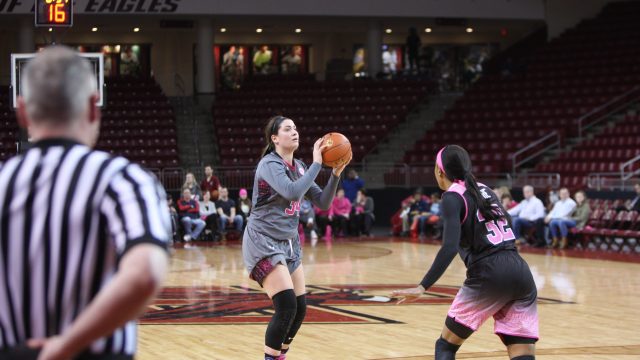 No. 5 Notre Dame Pulls Away From Eagles After First Quarter

It was a full house in attendance for Senior Night in South Bend, Ind., as Boston College women’s basketball took on one of the nation’s best teams in No. 5 Notre Dame. Looking to avenge their 11-point loss earlier in the season, the Eagles had their work cut out for them against a rolling Fighting Irish squad that looked to extend a nine-game winning streak that began in Chestnut Hill just over a month ago.

Despite opening the game on a seven-point run, BC quickly found itself in a hole due to Notre Dame’s spectacular first-half scoring. Seasoned athleticism combined with fantastic finishing ability at the rim put the Eagles quietly away as Notre Dame claimed a commanding home victory, 82-45.

As the first quarter got underway, BC (9-19, 2-13 Atlantic Coast) showed familiar signs of early-game excellence, outscoring the Irish 7-2 in the early minutes. Even better, the young Eagles squad seemed to be out-hustling a Notre Dame (26-3, 14-1) team famous for its speed.

But when the BC’s turnovers began to resurface and its shooting cooled off, it was time for one of the NCAA’s best fast-break offenses to take over.

Showcasing its offensive versatility, five separate Notre Dame players scored 10 consecutive points to take retake the lead. With the help of six early points by forward Brianna Turner, the Irish continued to pour on the offense as the Eagles struggled to score, ending the first period with a 26-14 advantage.

Although Notre Dame opened the scoring in the second quarter, BC sensed the need to keep it close early. Feeding Mariella Fasoula in the low-post, the center went bucket-for-bucket with the Irish offense early in the quarter.

But the Irish could feel their advantage growing and looked to stretch the lead as they capitalized on 10 BC turnovers in the half and shot 8-for-10 from the charity stripe.

Shooting a stifling 52 percent from the field and 42 percent from 3-point range, the offensive weapons of Notre Dame seemed unstoppable. Whether it was Arike Ogunbowale eating in the paint for nine points, Erin Boley sinking eight points off the bench, or Lindsay Allen posting eight points and seven assists, Notre Dame showed why it’s ranked fifth in the country, taking a 51-31 lead into the locker room at half.

Facing a huge deficit, the Eagles managed to quiet the Fighting Irish in the opening three minutes of the second half, not allowing a field goal. But the four points they managed in that time was not enough to get BC back in it.

After Fasoula scored her 13th point of the night to cut the lead to 16, the Eagles fell apart.

Scoring back-to-back layups, Allen began a run that would outlast the third quarter. Plateauing at 38 points after a Kailey Edwards free throw, BC went over four minutes without scoring in the third, falling behind by 28 points at the quarter’s end.

Picking up right where the third quarter left off, Notre Dame held BC scoreless for the first four minutes of the fourth while simultaneously piling up a 22-point run. Notre Dame’s 45.5 percent field goal shooting dwarfed BC’s 26 percent clip as the Fighting Irish outscored the Eagles in every quarter and took an easy 37-point victory.

Committing 19 turnovers to only eight assists, BC struggled against an elite Notre Dame defense that effectively doubled Fasoula, limiting her to only 14 total points, and held the Eagles to 14 total second-half points.

While the young Eagles will look to train their maturing talent in the nearing offseason, the stars of Notre Dame will be looking forward to the upcoming NCAA Tournament after its bright performance on Senior Night. With five players scoring in double digits, five players recording six or more rebounds, and five players dishing out 16 total assists, the Irish approach tournament season as a heavy ACC favorite with its eyes on Connecticut in March.