Home » With Win Over Merrimack, BC Advances to Hockey East Semifinals 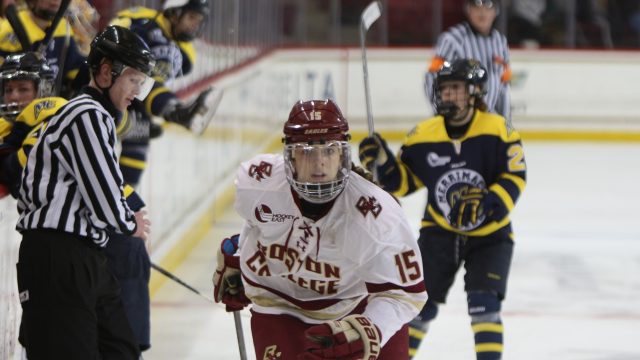 With Win Over Merrimack, BC Advances to Hockey East Semifinals

Only 24 hours after shutting out Merrimack College in the first game of the Hockey East tournament, Boston College women’s hockey suited up for another game against the Warriors in Kelley Rink. BC advanced in the tournament by topping Merrimack in a 1-0 win.

After last night’s shutout, the Warriors (11-22-3, 7-18-0 Hockey East) changed up their starting goaltender, replacing Léa-Kristine Demers with Samantha Ridgewell. BC (25-5-5, 17-4-3) came out aggressive again, but the Warriors kept a tighter defense and gained possession of most rebounds off Ridgewell’s pads. BC had its first chance at a goal when Andie Anastos skated the puck down the length of the ice and made a pass to Makenna Newkirk. She took a powerful shot on the sophomore goaltender but Ridgewell wasn’t keen on letting one in so early. Caitrin Lonergan gained possession of the rebound but still couldn’t find a way to push the puck past the goal line.

The Eagles found their second chance in Megan Keller, who received a pass from Anastos. After evading the sticks of multiple defenders, Keller took a risky shot from outside of the circle and the puck narrowly passed under Ridgewell’s arm before settling in the back of the net. The remainder of the period was tame, with neither team taking a single penalty. While the Eagles headed into the locker room comfortably ahead of the eighth-seeded Warriors, Merrimack headed off the ice with the same bitter taste of falling behind early into the game.

When the players returned to the ice, Merrimack tried everything in its power to tie up the game. But every time the puck made its way across the blue line with a Merrimack player in tow, there was always a BC stick to block it. The closest the Warriors came all period to scoring a goal was when Burt couldn’t catch the puck after making a block. As she reached forward to try to secure the puck in her glove, she left a large gap between herself and the goal. Despite the opportunity to secure a point, the Eagles were there to help cover Burt.

Ten minutes into the second period, Newkirk suddenly keeled over on the ice, unable to get up. During a fight for the puck a Merrimack defender came up behind Newkirk and grabbed her jersey, flinging her to the ground. Instead of sending a player to the box, the referees called icing, and had the women face off as Newkirk skated off the ice. The only penalty of the period was given to BC, as Erin Connolly was whistled for slashing. Despite the player advantage, the Warriors still couldn’t find a hole in the BC defense and headed into the locker room behind again.

The Warriors came onto the ice in the same aggressive fashion that they started during the latter half of the second period. Connolly was tripped and sent sailing into the wall early on, but the referees failed to call a penalty. Frustrated by the the possibility of a second shutout, Merrimack was becoming frantic.

Like Connolly, Ryan Little was tripped by a defender’s stick and caught between two players after falling to the ice, but again nothing was called. The aggression the Warriors showed caught up to them, with Marie Delarbre getting sent into the box for body checking.

The Eagles couldn’t capitalize, and when the game returned to full strength, the Warriors pulled Ridgewell and attain a player advantage. Despite two minutes with an extra player on the ice, the Warriors didn’t tie up the game and it ended with another narrow victory for the Eagles.

Head coach Katie Crowley didn’t mind the physicality of the second half of the game, and is proud of how her team handled it.

“We did a pretty good job at holding down the fort there especially when they came at us pretty good in that part of the second and into the third,” Crowley said. “Overall, we’re really excited to be moving on to the next round of the Hockey East playoffs and that’s the big thing for us now.”