Being valedictorian is one of the highest honors one can achieve in high school. But what does it mean after graduation passes? An entire field of study revolves around this question, and one of the foremost authorities on it is Karen Arnold, an associate professor of higher education at Boston College. Because of her insatiable desire to find this answer, Arnold has uncovered how prejudice seeps into the academic realm and developed effective methods to advance social equality.

While attending graduate school at the University of Illinois at Urbana-Champaign, Arnold came in contact with Terry Denny, a professor of educational psychology, who was conducting a study on high school valedictorians. Denny focused on figuring out what made students good at school, and why some could rise above the others to become valedictorians. Though he had already attended numerous high school graduations to profile each school’s valedictorian, he could not conduct all this research on his own.

Arnold found herself in the right place at the right time and offered to join the study as an apprentice. Little could she have imagined that it was to carry on for 14 years and become groundbreaking work in the field.

Detailed in her book Lives of Promise: What Becomes of High School Valedictorians, the study follows the lives of 81 valedictorians for 14 years after graduation. She first found that they are not one-sided individuals that solely focus on academics, but are multifaceted and well-rounded. These qualities help them thrive beyond school.

“They get school,” Arnold said. “While they’re not entrepreneurs or mold-breakers, valedictorians continue on to succeed in mainstream institutions.”

In contrast, she also discovered that the gender gap affected valedictorians as they progressed into their careers. For men and women who performed equally well in college, women left college with lowered intellectual self-esteem and achieved a lower level of success in the workplace than men.

On the whole, the study was an immense success that opened doors to new research opportunities, such as one from the organization Big Picture Learning. Its mission is to engage socioeconomically-disadvantaged students in an innovative approach to schooling that connects to their interests and passions. Arnold worked to uncover whether this style of education predicted success, and her findings were rather grim.

“Race and class stopped these students from achieving future success,” Arnold said. “It was a scandal.”

Furthermore, Arnold discovered another phenomenon influencing the organization’s students: “summer melt.” Students’ motivation to attend college faded between the time they accepted their offers of admission to when school began in the fall, so much so that they never turned up. Often, financial aid failed or an obligation to help the family came up that prevented students from showing up in September.

Her findings led to interventions to keep Big Picture Learning students on track to attend college. While admissions programs previously stopped working with students the moment they committed to a college, they now continued work over the summer to assure attendance in the fall, giving these students the opportunity to make something of themselves through a college education.

When she was offered the chance to lead research initiatives behind two massive institutional interventions, she discovered more about the complex process behind getting these students to attend college. One, funded by the Department of Education, put 30,000 seniors in a treatment group that received year-long college advising through text-message interaction and 30,000 seniors in a control group that did not receive help.

The goal of the study was to see if the advising group enrolled in college more than the control group. Conducting data mining of the treatment group’s text-message interactions and gathering the rate of students attending college, she found that those who received some form of intervention had more success—something as simple as a text message could get more students to go to college.

The other study was on CollegePoint, an organization funded by Bloomberg Philanthropies that works to enroll high-achieving, low- and moderate-income students into high-ranking private universities. CollegePoint provides students virtual advising through text-message, Skype, and many other forms of online communication.

Arnold’s goal was to follow a group of the class of 2016 advisees through the experience of their first semester at college. The students of the group made an audio recording twice a week and a video on Instagram once a week capturing their college experience.

“The study gave us an illustrated diary of their first semester,” Arnold said.

They had the freedom to talk about anything, be it their grade on a midterm, problems with roommates, or struggling to meet financial obligations. As the project progressed, the students opened up and revealed more personal information about what their college experience was like.

Arnold will conduct a follow-up study on an initiative that gave students of color interaction with NASA scientists at Goddard Space Flight Center. Arnold will be tasked with figuring out why these students were more likely to have graduate degrees and work in STEM fields in the future.

Looking back, she emphasizes that her path has been unpredictable yet motivated by passion. Due to her persistent desire to learn about the valedictorian post-graduation, her research has generated significant strides toward equal opportunity through education.

“I believe success lies in three areas: your education, your career, and your life satisfaction,” she said.
Through her research in the first area, Arnold is one step closer to helping high-achieving students of many backgrounds pursue success beyond the confines of school. And, even if they can’t be their school’s valedictorian, her work will help them enjoy all of the same benefits. 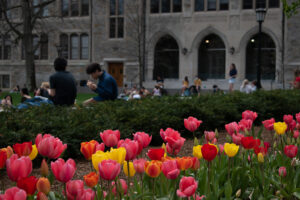