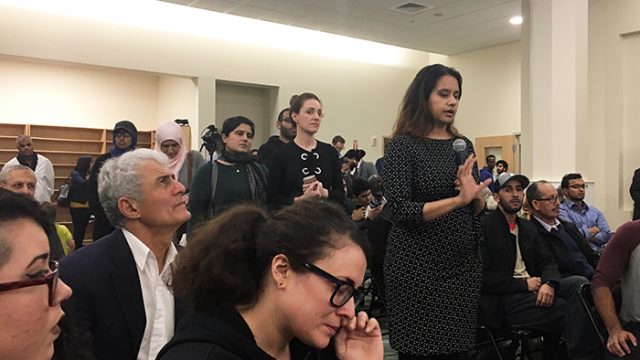 The first in a series of community conversations about refugees and immigration issues hosted by the Boston Mayor’s Office began on Friday night. In this event, hosted in conjunction with the Islamic Society of Boston Cultural Center (ISBCC), Mayor Martin J. Walsh, WCAS ’09 addressed the actions—and inactions—that President Donald Trump’s administration has taken in the past month regarding immigrants and religious groups, and gave clarification regarding how his team will tackle the growing concerns of the Boston community.

The Immigrant and Refugee Community Forum began with a reading from the Qu’ran in both Arabic and English which expressed that, in part, those who strive are valued above those who stay at home. This concept of active participation and activism was a common theme of the night.

Shaykh Yasir Fahmy, the senior imam at the ISBCC, spoke first. He related the common theme of refugees seeking safety and a better life in Judaism, Christianity, and Islam, to the current refugee situation in the world. Though Fahmy believes the current situation in the United States is very far from ideal, he explained that it might be “a blessing in disguise” as it pushes people in the community to come together, and fosters the belief that people really can come to the U.S. to have better lives.

Before introducing a few members of the community as speakers, Fahmy closed with an anecdote to which the first place Muslims migrated was a Christian kingdom in modern-day Ethiopia, because the prophet Muhammad believed that it was the safest place to send them. There was no fear, at that time, that the religious differences would divide them, and Fahmy expressed his hope that this idea of harmony would help guide the actions of the Boston community.

The first member of the ISBCC community to offer testimony was Nour Tabidi, a daughter of two Sudanese immigrants who is married to a Sudanese national. Tabidi was in Sudan with her husband when Trump’s executive order banning immigrants from 7 majority-Muslim countries went into effect. Tabidi described the feeling of horror that came over her when her husband, a green card holder, was not allowed to get on the plane they were boarding to return to the U.S. The extensive undertaking that ensued consisted of multiple fruitless trips to the airport, but was eventually resolved when her husband was finally permitted to pass through security at Logan International Airport in Boston after a court issued a seven-day stay on Trump’s ban.

Rahmatullah Aka also shared his story, which offered a different perspective, at the forum. He was born in Afghanistan and worked for the US embassy there for many years. In 2015, Aka moved to the U.S., and now works as a case manager for refugees. The recent travel bans, Aka said, have caused a lot of stress for the people he works with because their current situation and status in the U.S. is unclear.

The stress and worry over the future is not just limited to the people with whom Aka works. Many Bostonians attending the community forum expressed similar themes in the questions and comments that they voiced to Walsh later in the night.

Walsh sought to assuage those fears, and echoed Fahmy’s sentiment regarding religious harmony. The mayor spoke about a trip he took to Israel and how, in Jerusalem, if one visits a certain place early in the morning, they can hear Jewish, Christian, and Muslim prayer services all taking place simultaneously. Three groups of people, all doing the same thing, just expressing it in a different way. This event had an obvious, lasting impact on him.

As he continued to speak and answer questions, Walsh frequently revisited the idea that his parents were immigrants—both came from Ireland—and the “unfair and discriminatory actions coming out of Washington, D.C.” affected him on a personal level as well.

Boston is, according to Walsh, 28 percent foreign born and 43 percent first-generation American citizens. It is a city composed of and built by immigrants.

“In 2014, I was elected to represent all of Boston, including immigrants,” said Mayor Walsh. “In Boston, we are going to stick by our values.”

When multiple questions came up about immigration enforcement, Walsh stressed that the Boston Police Department (BPD) is not U.S. Immigration and Customs Enforcement (ICE). The BPD exists to protect all members of the Boston community. Additionally, Walsh emphasized that Friday’s meeting was the first of many forums that would be happening in the community going forward.

All present were urged to go out and get to know their neighbors and to fight back with love, a parallel to the selection from the Qu’ran read at the beginning of the forum.

Walsh called for Boston to continue to be the “diverse, great city” that it is, and said that if anyone took issue with the Trump administration’s actions,“ there is an election in November.”

Walsh spoke for close to two hours, making sure to answer every single question in the audience. He addressed many specific issues about policy and Washington that were brought up, but his focus remained one of reassurance for the city he grew up in. Toward the end of the time he spent speaking, he offered words of encouragement to those gathered at the Islamic Society.

“All I can speak for is Boston, and all I can say is tonight you don’t have to be scared and tonight, in Boston, I hope you will not be scared,”Walsh said.