Home » Former President of Ireland to Speak at Clough Colloquium 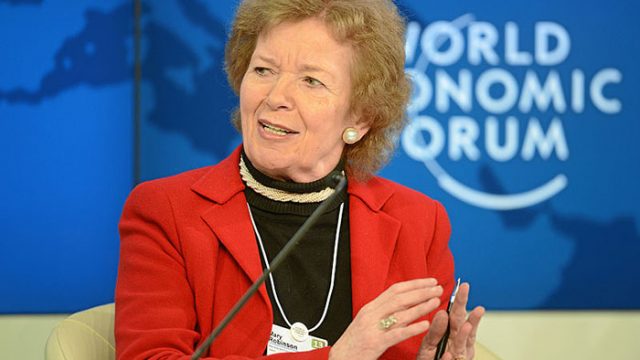 Former President of Ireland to Speak at Clough Colloquium

Mary Robinson, who served as the first female president of Ireland from 1990 to 1997, will speak at a Clough Colloquium series event on March 13. She will speak about human rights, climate change, and gender equality at her talk, which is titled “Making Human Rights the Compass for All Ethical Globalization.” As the event will fall during Women’s History Month, it is co-sponsored by the Boston College Women’s Collaborative, the Women’s Center, and the Civic Engagement Committee.

The Clough Colloquium is organized by the Winston Center for Leadership and Ethics in the Carroll School of Management. The center’s mission is to introduce a cross section of diverse people that provide both national and global perspectives, according to Monetta Edwards, the assistant director of the center. The purpose of the Clough Colloquium is to allow students the opportunity to hear perspectives from prominent world figures.

“We try to focus on relevant issues of the time and bring in people who can talk about those issues,” Edwards said. “It is important for us to bring in people from outside of BC to share their experiences and their world with the BC community.”

Edwards wanted this semester’s Clough Colloquium speaker to have a global perspective, and after deciding between a long list of speakers, Robinson was chosen. Robinson will bring a focus to women in leadership and her work in human rights as the former U.N. High Commissioner for Human Rights. She will also speak on her knowledge of climate change, as she is the founder and president of the Mary Robinson Foundation—Climate Justice.

David McCullough, the historian and writer famous for John Adams, Truman, and other nonfiction work, will be the next Clough Colloquium speaker, in September. His keynote address will close out the Winston Center’s 10-year anniversary in the fall.

“Because of his wealth of knowledge on the U.S. political scene, it will definitely be very interesting to hear him talk about what he feels is going on in our political climate today,” Edwards said. 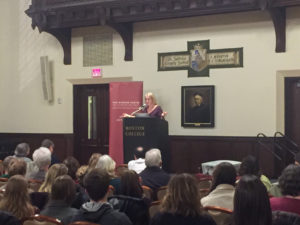