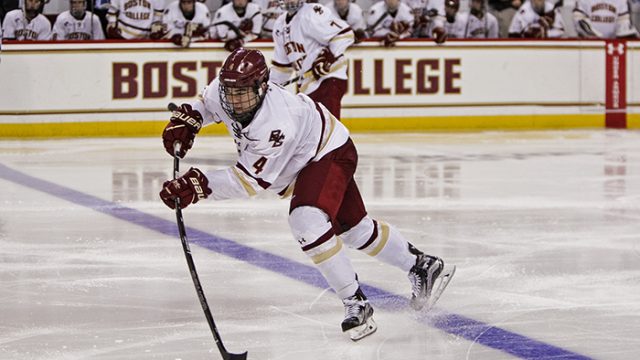 Eagles Blow Out Vermont in Hockey East Quarterfinals Game One

Maybe Boston College men’s hockey really did need a break. What it definitely needed to do was score more goals to prolong its season.

The Eagles managed to do just that on Friday night, as they took advantage of some early puck luck and blown assignments by Vermont to jump out to an early lead and give goalie Joseph Woll more than enough of a cushion. Woll notched his first career shutout on the way to a 7-0 BC win in Game One of the Hockey East Quarterfinals.

“Quite frankly we didn’t have many players that performed to playoff standards for our hockey team,” Vermont head coach Kevin Sneddon said. “We certainly have to give credit to BC. They finished a lot of chances.”

BC’s first line of David Cotton, Austin Cangelosi, and Colin White, along with its first defensive pairing of Luke McInnis and Casey Fitzgerald, deserve that much of that credit. The credit for the first tally, which Cangelosi scored just eight seconds into the game, shouldn’t really go to anyone, though. Cangelosi’s centering pass to Cotton snaked its way off a Catamount skate and through Stefanos Lekkas’ five-hole, the fastest goal in Hockey East playoff history. If anything, it’s on the Catamounts for giving up a 2-on-1 opportunity so early in the game, but regardless, it was a big goal for a lot of reasons.

“The early start generated a lot of enthusiasm for our bench,” head coach Jerry York said. “We’ve had difficulty scoring goals over the last number of games, so for us to get that early goal was a good catalyst for us.”

Casey Fitzgerald picked up the secondary assist on Cangelosi’s opener, but McInnis outdid him five minutes later with a multiple-line stretch pass that hit White as he streaked into Vermont’s zone. White, who also assisted on Cangelosi’s goal, roofed the puck past Lekkas from in close for his 12th of the season. With Jesper Matilla out, York needed the freshman McInnis more than he usually does. The Hingham, Mass. native delivered with one of the best games of his young career, potting his third goal of the season while also picking up three assists.

“Beautiful,” Cangelosi said of McInnis’ passing. “He was alert, he was ready to go from the puck drop. When we needed him he stepped up, made some great passes that led to goals. It was awesome to see.”

Just as White was heating up, though, he left the BC bench for the locker room later in the game with what looked like a lower body injury. York said the team would know more in the morning regarding the injury.

If the first goal was due to luck and the second was in large part due to Vermont forgetting about White as he sneaked behind the Catamounts’ defense, then Cotton and McInnis really earned the third one. McInnis finished the first-period barrage by capitalizing on fellow freshman Cotton’s end-to-end rush with a blocker-side wrister from the point that beat Lekkas to the top corner to make it 3-0 less than 15 minutes in.

The Catamounts finished out the first period strong, though, and looked ready to attempt another comeback from down 3-0 in Chestnut Hill like they did a few weeks ago. Early in the second period, Woll had to stretch out to make a sprawling save on Brian Bowen, and that was after White and Cangelosi each prevented a couple prime Vermont looks at Woll from the slot with some timely backchecking. Yet soon after Bowen couldn’t convert, Sneddon’s team lost track of another small senior forward as Matthew Gaudreau took a two line pass from Michael Kim and walked in on Lekkas, beating on a backhand-to-forehand move. Vermont forward Brady Shaw was back there calling for an offsides, but after a review the goal stood. That Shaw was the closest one to Gaudreau was emblematic of a sleepy defense.

“I don’t think we we’re safe yet,” Cangelosi said regarding the early 3-0 lead, and making reference to BC’s blown 3-0 lead in an earlier game against Vermont. “We knew we still had work to be done going into the second and I think we responded well.”

The Eagles learned their lesson from three weeks ago and responded by adding three more goals after Gaudreau’s. They even outshot Vermont in the second and third periods despite the big lead. York said the game was closer than the score, but either way, his Eagles came to play in the biggest game of the season—so far. They’ll need to do that again when the other team does, too.