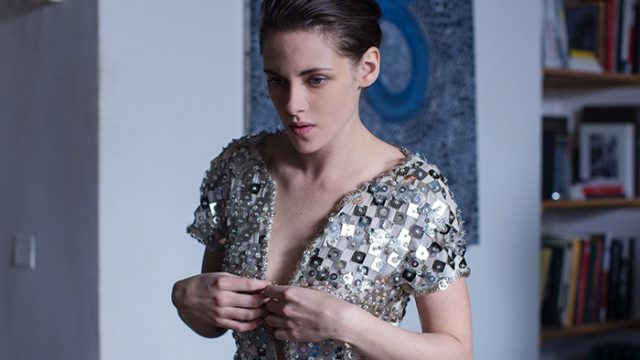 A Protean Portrayal of Paranormality, ‘Personal Shopper’ Provokes and Perplexes

Sporting what is perhaps one of the oddest combination of professions outside of Bruce Wayne’s roles as billionaire-philanthropist-playboy-vigilante-detective, Personal Shopper’s Maureen (Kristen Stewart) is the wardrobe buyer for a rich model by day and a medium on the search for a sign from her dead twin brother by night. And business is good.

Personal Shopper is French director Olivier Assayas’ latest movie, which won him the award for Best Director at the 2016 Cannes Film Festival. This is especially interesting considering the film was booed at its initial screening at the very same festival. Watching Personal Shopper, it’s easy to see why it garnered an award on the one hand and was booed by audience members on the other.

Simply put, this movie is weird. Personal Shopper begins as what feels like a story about the difficulty of letting go. Maureen is living and working in Paris, shopping for a petulant and capricious woman. The clothes she buys are gorgeous, but Maureen is not allowed to try anything on, as per her employer’s draconian instructions. Her boyfriend Gary (Ty Olwin), a technical specialist working in the Middle East, pleads with her to leave the city behind and stay with him. Maureen grapples with the idea, but feels that she must stay. “I’m still waiting” becomes a pseudo-mantra for her. She and her twin brother Lewis, who was also a medium, suffered from the same heart malformation and they swore to each other that the sibling who died first would send the other a sign. For the first 40 minutes of Personal Shopper, the audience is lulled into the sense that this film is a somber reflection on mourning and loss, with Maureen struggling to come to grips with the death of someone she was close to. Maureen believes in spirits or ghosts or some sort of paranormal entities, but the audience isn’t so sure.

Out of left field, Maureen begins to receive texts from an unknown number. These messages appear to know her every thought and move. Maureen and the audience are pushed to think that the sender is in fact a ghost, especially after Maureen sees an actual ghost in the house her brother died in. The tone of Personal Shopper changes jarringly into a paranormal thriller, as the tension between Maureen and this mystery texter grows palpable. Throughout this part of the movie, there is an aspect of their written conversation that begins as a tiny annoyance, but grows and grows until it is pulling the viewer out of the movie every time it happens. Every time Maureen, or Kristen Stewart, sends a text with a question mark, she puts a space between the last letter and the question mark. Granted, this habit seems minor, but whether this is a directorial choice or it’s just something Stewart does, it’s glaringly obvious because Personal Shopper does a close-up of her iPhone at every text she sends.

Aside from unintelligible punctuation choices and multiple shifts in tone throughout the film, Personal Shopper is a very good movie. The film is protean, leaving no edges or handholds for the audience to cling to as it flows between genres. Yet, there is something about Personal Shopper that is truly artistic. The movie is gorgeous to watch. For example, midway through the film, Maureen is shown giving in to her desires and trying on the clothes of her employer. The cinematography throughout the scene is stunning. Maureen walks from one edge of the screen to the other, disappearing behind a wall in the middle and appearing on each side with an additional article of clothing. The transformation from her usually bland wardrobe to the artistic and expensive outfit of her employer is mesmerizing. Stewart as Maureen is probably the perfect casting choice. Assayas handpicked her after her work on his previous project Clouds of Sils Maria. Stewart is a talented and often underrated actress. She is usually dismissed because of her stoic portrayal as Bella in the Twilight series. In Personal Shopper, she is able to emote through the full range of feelings, keeping the audience aware of her inner thoughts and desires through expression sans words.

Personal Shopper is far and away not the movie for everyone. The film doesn’t make any attempts to ingratiate itself to anyone beyond a very niche audience type. There are no concessions in Personal Shopper—it is exactly what Assayas intended it to be; strange, artful, and mysterious. Like quicksilver, just when you think you’ve got a grip on it, Personal Shopper slips through your fingers.