Wearing a powdered wig and speaking in an English accent, John Colpoys, MCAS ’17, stands in front of a room packed with high school students and answers questions about Brexit.

Shouts erupt around the room, some outraged over the possibility of leaving the European Union, some raring for the chance to cut and run. Just as the real Parliament had these same raucous debates last year, these high school students, under the direction of Boston College undergrads, are engaging in the same procedures. They are delegates at EagleMUNC V, the fifth BC Model United Nations conference held from March 17-19.

The 2015 British Parliament is one of 17 committees occurring simultaneously at the conference, including a FIFA committee, those addressing climate change and gender inequality, and one simulating the Mexican-American War. In each of these simulations, high school student delegates engage in procedural debates, paper-drafting, and the eventual creation of a resolution meant to address a serious problem with global implications.

Just down the hall from the Cockney-tinged yelling of British Parliament, the United Nations High Commission for Refugees attempts to draft a resolution to address the humanitarian crisis presented by refugees.

Floor-to-ceiling windows line the back wall of the conference room on the third floor of the Westin Copley Place and provide a wide-ranging view of downtown Boston out to Back Bay and beyond. At the front of the room, BC students sit at a desk looking out at the rows of tables lined with high school students. They discuss the crisis, as the delegates representing each nation in the U.N. come up to them to ask questions and pass on important information. Earlier, they watched a virtual-reality presentation of what it is like to be in a refugee camp, something that immersed them in the difficult reality of the situation they are debating.

In suits and dresses, they cross back and forth in between tables, huddling to discuss compromises and possible deals, while lobbyists lurk in the background, waiting for the right moment to speak to delegates and pursue their company’s interests. The sound of a gavel from the front brings everyone to order as the unmoderated debate ends and a vote is called for the next period of debate.

A few quick steps down the hall, in a small windowless room with pizza boxes and drinks littered around, BC students sit around circular tables, frantically talking, occasionally leaping up and rushing out. Rolled up shirt-sleeves, loose ties, reams of notepaper marked with wild jottings, and the glow of laptops characterize the rush of the situation. This is the crisis room. Each committee has its own set of BC directors and staffers working to adapt the simulation and present the delegates with new crises to overcome.

The night before, the Wall Street committee, which was already dealing with the 2008 financial meltdown, underwent a midnight crisis. One of the delegates representing a major bank stormed out of the middle of the meeting and, with no warning or preparation, the other delegates had to figure out who would take over the bank in his stead. The delegate, who had been posing as a high school student, was actually a BC freshman planted by EagleMUNC to provoke this crisis and force the delegates to respond in a timely and effective manner.

In the second crisis room four stories above the other, the same mood of frantic and excited motion follows EagleMUNC staffers as they attempt to figure out the next step for their respective committees. Eric Sporel, MCAS ’18, is the director of the ad-hoc committee, which currently represents the Mongol government under Genghis Khan. He receives an update that the committee members haven’t done anything to deal with encroaching Chinese soldiers. That committee had already dealt with a crisis earlier, when Genghis Khan disappeared. This led to the unexpected need to find a new leader from among the delegates, which they managed to do. But after finding this new Khan, wily Genghis showed up again, beheaded his replacement, and retook his place as leader. With all these crises for the ad-hoc committee to manage, they have neglected the Chinese threat.

In a quick and decisive discussion, Sporel decides to tell the committee that the Chinese Army, 140,000 troops strong, is only two cities away from the Mongol capital. Two staffers, one carrying a plush stick horse and the other carrying a toy sword, cross the hall toward the conference room where the committee is discussing Mongol affairs to inform them of the newest crisis they need to face. When given the news, delegates immediately bombard the staffers with questions of military might and strategic possibilities.

In the face of this rapid and complex action, Kerianne DiBattista, EagleMUNC’s Secretary-General and MCAS ’17,  maintains a calm demeanor, despite being responsible for the management of the entire conference.

“My favorite experience in EagleMUNC is seeing the conference come together each year and this one is the best because I was most involved,” she said.

DiBattista joined EagleMUNC her freshman year, which was only the second time the conference had ever met. Starting as an entry staffer, she took a leadership role in her committee and worked toward her current position, in which she is responsible for managing all the day-to-day activities of the club.

As the Secretary-General of the fifth EagleMUNC conference, DiBattista has watched EagleMUNC grow over the years from what was once a small and newly-developing club.

Back in 2012, Braeden Lord, BC ’15, came to BC after participating in Model U.N. throughout his high school career. Unfortunately, he found that BC didn’t have much in the way of a Model U.N. group.

“The club was essentially fledgling,” he said. “There were no more than 15 active members. We attended conferences and vitally didn’t throw a conference, and I thought that was a space for BC to really achieve something.”

From the club’s weak background he decided to create a conference and build up an entire organization. It started small. The first year, the conference was held in Gasson Hall, brought together 100 delegates from 12 local schools, and only lasted one day.

“It was adorable,” Lord said. “We had a staff of people that my friends and I had basically begged to join and to participate for a day.”

That didn’t last long. After taking a year off to build resources and plan for the future, EagleMUNC returned and started a multi-day conference at the Westin Copley Place. Lord brought everything he could to involvement fairs, even a wacky inflatable flailing tube man to attract freshmen.

Started by a freshman and building from almost nonexistent roots, the club grew to one of the largest student organizations at BC. This year’s conference alone involved 150 BC student staffers, 70 high school teachers, and 650 high school students from as close as Newton and as far away as Greece. In the first few years, Lord dealt with students quitting their positions when faced with the reality of the organization’s time commitment. As a brand-new event that required extensive planning and work, he had to convince people that EagleMUNC was worth the effort. One major part of this was establishing the conference as something different and special.

Lord worked to make EagleMUNC a unique, creative, and worthwhile conference by instituting the 40-Hour Simulation. At most Model U.N. conferences, delegates remain in character during the committee meetings only. In high school, Lord saw fellow delegates remain loyally in character during these meetings, but then immediately fall back into being high school students when it was adjourned. He wanted to create a simulation where the delegates felt like their character for the full 40 hours of the conference.

This means that delegates get emails for their character, such as one of the Wall Street delegates receiving updates on their stock’s value from Tokyo at 3 a.m., and that a delegate might get a call in the middle of the night about a hostage crisis that he or she has to deal with immediately.

“Our identity is trying to be the most innovative, creative conference in Model United Nations,” Lord said.

This new approach to the conference has allowed for events that break the conventional Model U.N. mold. During the second EagleMUNC conference, the committee of U.S. senators had a post-meeting gala. They all remained in character within the social context and had to deal with lobbyists attempting to influence them throughout the event.

One important aspect of maintaining this unique approach to a Model U.N. conference, according to Lord, is to preserve institutional memory. Each year, a new Secretary-General is appointed and must make important and quick decisions. Over the past five years, the club has grown dramatically from its humble beginnings, with each Secretary-General continuing to build upon the work done before.

Both DiBattista and Lord point to a sense of community as one of the best parts of EagleMUNC. When Lord first started pitching the newly-created conference to students, he would always say that it is “awesome” and “for everyone.” It gives students the chance to be a part of a large and dedicated community that works for something they care about, and it has a place for people of all backgrounds: students interested in international politics, business students who want to get involved in the finance part of the club, or communication students who want to learn how to market and manage.

While high school students vote and write and work diligently to pass resolutions, and BC students scramble to deliver new crises and manage the rapid, immersive conference, Lord recalls one of the main reasons these students are drawn to EagleMUNC.

“Boston College students are so beautifully desperate to give back,” Lord says. “This is a really cool way to give back to people from all over the world.” 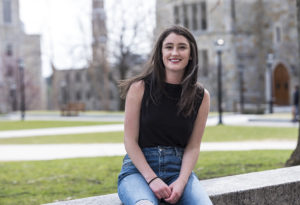