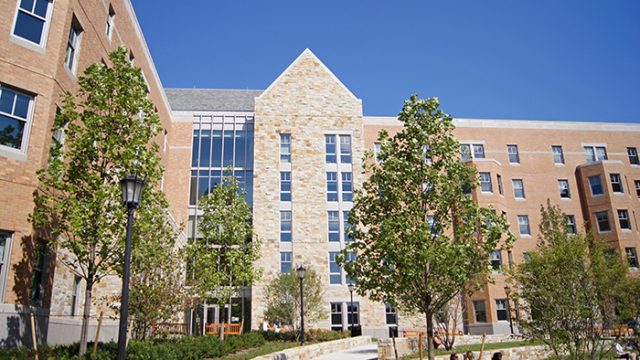 Bringing Humor, Housing Together With @BC_ResLife

If you take a left at the front desk and walk all the way down the hall on the fourth floor of Maloney Hall, there is a little unmarked room in the Office of Residential Life. Inside, there are lab coats, plastic beakers, and a periodic table on one of the white boards. This is not an impromptu science lesson, pushed out of Merkert for the sake of space. Rather, for two weeks only, it is the most important place on campus, one that decides the fates of almost every one of the 9,100 undergraduates at Boston College.

It’s ResLife’s room selection team’s inner sanctum, and the theme this year is chemistry. Every pick time and available room flows through this office, and five people—Greg Jones, Noor Ibrahim, Austin Hanlin, Samsul Mahmood, and Thomas Palanza, Jr.—work together to convey this information through the sassiest account on campus: @BC_ResLife.

Since March 2011, @BC_ResLife, the official Reslife Twitter account, has answered the questions of the BC student community and publicized events around campus. Live tweeting for room selection began in 2014, though it was noticeably more robotic than the gifs and comebacks that now characterize the process. For example, on March 17, 2014, @BC_ResLife tweeted “Mods are now officially Filled up.” But this year, its creators were more relatable. It tweeted, “MODs are gone…” with a gif of a machine crushing the words “hopes and dreams.”

Mods are now officially Filled up

“In recent years, it’s gotten a little more active,” Jones, the director of housing operations, said. “It used to be more of just like, ‘Oh, send us questions, we send responses, you know we’ll tell you what’s happening and what’s being selected’ and that sort of stuff, but I think in the last two or three years we’ve gotten a bit more fun with it.”

Part of the reason for the development came when Palanza, a technology support specialist, stumbled upon an article on CollegeMagazine.com disclosing the 10 Twitter accounts necessary to BC students. @BC_ResLife was one of them, highlighting its light take on the room selection process. Palanza saw the shout out as a license to take it over the top, and the Twitter account turned more into what it is today.

During the two weeks when it is funniest and most important, @BC_ResLife averages around 15 to 20 new followers a day. Palanza noted that he does not track how many people unfollow the account after room selection is over.

Though room selection is one of the most nerve-wracking experiences for BC students, the five members of the team have different perspectives on what constitutes prime real estate on campus. This year, 2150 Commonwealth Ave., referred by ResLife as the Thomas More Apartments, was the last to fill up its six-person apartments on the first night of room selection. The dorm also fell behind for most of four-person selection, with 2000 Commonwealth Ave. staying at 0 percent capacity until all other rooms were filled. The Mods, as is typical, were the first to go.

“For us at least, [the Mods] are a paradox,” Palanza said. “We look at it, and it’s like, ‘This is some of the worst housing we have on campus,’ but people love it so much.” While the red-colored shacks, which have been labeled as “temporary housing” on the ResLife website since they were built, may not attract the people who work in ResLife, some of that may be attributed to the supervising rotations they have to take during football season.

As for 2150, the room selection team has tried to understand students’ mentality about the dorm by talking with the student workers in the office. The biggest reason for students’ not picking 2150 is because it is considered too far from the rest of campus.

“For me that also is a very weird concept, because where I went to undergrad, we took buses to class, and our campus was split between three different cities,” said Noor Ibrahim, an assistant director of housing assignments and occupancy who attended Rutgers University. “I just understand it as the culture here, just like there’s a culture of wanting to live in the Mods, there’s a culture of wanting to be closer—as close as possible—to everything.”

This year, the Mods filled up at 5:40 p.m., prompting the aforementioned crushed-dreams tweet. As each five-minute slot contains three groups, the disappointment can be tripled. For some, the Twitter was a welcome boost to the devastating loss of a Mod.

“We were all gathered around together,” said Basem Itayem, MCAS ’18, who had a 5:40 pick time. “We actually clicked on the Mods, and once we clicked through it, it said that there was no more, and it was just kind of a sigh of sadness.”

Even with the surprise twist, Itayem thought @BC_ResLife’s final tweet on the matter was a humorous one.

For Jones, that’s exactly what he wants.

“We know that a lot of students take housing selection pretty seriously, and that it is a big deal for some students, and we just try to add a little levity to it,” he said. “It’s a little bit of trying to turn frowns upside down sort of thing.”