Home » Are You Going to Finish That Trash? 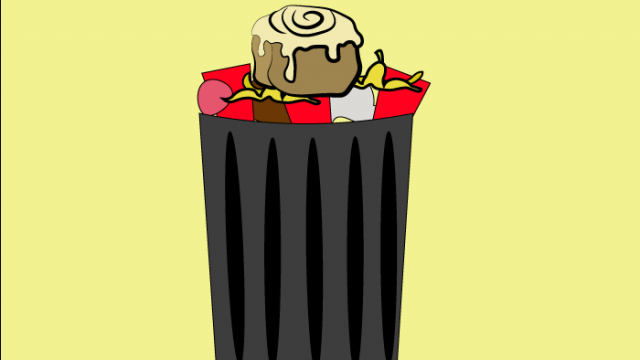 Are You Going to Finish That Trash?

Before coming to Boston College, I heard a lot of mixed advice on food and eating in college. Some warned me of the “freshman 15,” the weight gain some students experience after moving away from home. Others expressed worry at my not having enough to eat. My mom recounted her consumption of low-budget cuisine in college, featuring cans of Campbell’s SpaghettiOs and peanut butter and jelly sandwiches. There seems to be two distinct issues: students are either eating too much or are unable to eat enough.

This year, as I have lived off campus on a tight budget and without a meal plan, I have had to get creative in order to eat. I have attended events solely to take advantage of the free food, bringing a Tupperware container with me to discretely store leftovers for later. Like I suspect many BC students have done before, I routinely steal food from the dining halls on campus. And recently, I have even begun eating food from the garbage.

A few weeks ago I was standing by the dirty dish carousel in Lower when I saw the most beautiful fruit salad in a plain white bowl, balanced delicately atop a tower of plates and used napkins. As the belt slowly carried the fruit to my left, I looked to see if anyone was watching, then I reached out and claimed it. I ate every single piece of delicious watermelon and pineapple in that bowl. A few days later, in the same area I found a cinnamon bun with a single bite missing. I was not ashamed when I plucked it from the carousel and gladly sunk my teeth into the sugary goodness.

Students frequently complain about the high prices and long lines that result from BC’s “declining balance” system instead of the meal “swipe” system used at most other colleges. But BC’s dining system probably contributes to less wasted food than at a buffet-style dining hall where students pile on food for a flat rate. Because we have to pay for each item, people may be more careful how much food they consume, or don’t and then proceed to throw away.

I was initially excited to find this food, but my emotions quickly turned to outrage. Who in their right mind throws away a perfectly good fruit salad? If I, without trying, stumbled upon these two nearly flawless snacks, think of all the food that is tossed when I’m not standing waiting for people to drop off their “garbage.” It’s probably a lot, seeing as every year, retailers and consumers waste roughly one-third of all foodstuffs. Much of this food is doomed before it even makes it to stores due to demands for “blemish-free produce.” But there is still a significant amount of food going to waste at BC. The Office of Sustainability claims that food waste “accounts for a major portion of trash collected on campus,” and the dining halls collected and composted nearly 300 tons of food in the 2015 Fiscal Year.

Supposedly the dining halls are working harder to compost food waste, as a new composting system was established in McElroy Commons last month.

Composting is a whole other issue that I have mixed feelings about. Last year, when I lived in the Sustainable Living and Learning Community in Edmond’s Hall (rest in peace), my roommates and I were encouraged to compost our food scraps in a special bin by our regular trash can. This practice attracted a ton of fruit flies, and it sucked having to empty our can into the larger compost bin seven floors below us. Its putrid stench filled the entire hallway and once, when I was hungover, I opened the lid and actually threw up. But I digress …

Don’t get me wrong, composting is important. Instead of clogging up landfills with other trash, compostable food scraps are transformed into a natural fertilizer that can be used to enrich soil.  But I worry that a lot of food being composted is perfectly edible. We should be doing more, especially when a lot of college students are going hungry. A recent survey found increasing numbers of students experiencing food insecurity (and homelessness) at colleges and universities in Massachusetts. The survey covered state and community colleges, so not exactly hoity-toity, private four-year institutions like BC, but I imagine a lot more students here are suffering from hunger than we realize.

So, we have two problems: too much food being wasted, and people going hungry. This seems like it would be easily fixed, but I’m not sure that it is. People aren’t exactly eager to eat food out of the trash, and those who do face a lot of judgment. Throughout the U.S. and the world, there are communities of people who live entirely on food rescued from the trash. This lifestyle is part of an ideology termed “freeganism,” that calls on people to recover wasted goods like food through “dumpster diving.” This can even be considered a crime in some places.

Currently, BC Dining has an initiative in place to donate leftover food. Partnering with the student volunteer group Every Bite Counts (eBC) and the food rescue organization Loving Spoonfuls, dining halls donate extra food to over 40 different homeless shelters, soup kitchens, and food pantries in the Greater Boston Area. But I think something needs to change if we hope to stop hunger at our university.

Perhaps eBC should survey food insecurity at BC and plan to bring a portion of leftover food to hungry students within our community. Maybe BC should stop requiring the purchase of meal plans for students living in certain residence halls. I know people who have hundreds of dollars leftover at the end of the year, people who contribute to waste by purchasing tons of food that never is eaten.

Most importantly, I think we need to change our mindset on food and sustainability. I’m not your mother, I won’t tell you to finish everything on your plate, but it’s important that we are grateful for the food that we have. We need to be more conscious of how much we buy and throw away. And the next time you’re hungry, take a look in the trash before you head to the mile-long line at Eagle’s Nest.