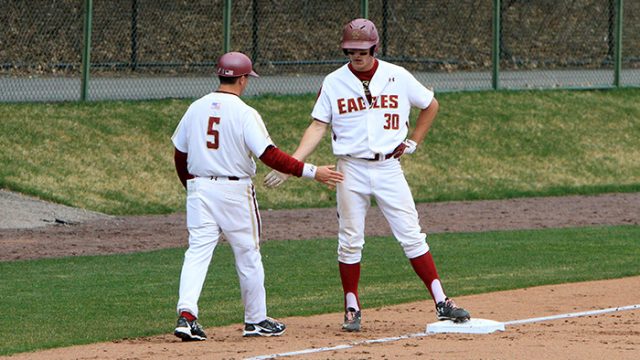 Eagles Hang on to Defeat Northeastern

Although the ground is still covered with piles of snow as we enter the spring, Boston College baseball experienced its first action up north this season on the road against Northeastern. After back-to-back weekends against top-five opponents and ACC foes Florida State and Louisville, the Eagles looked to snag a mid-week victory against a weak Huskies club.

With a difficult schedule, BC has struggled out of the gate coming off its NCAA Super Regional appearance last season. While the offense continues to scuffle as it has in the past, the pitching staff has adjusted to the loss of its two best pitchers and one of its best relievers. Although the staff carried them last year, the Eagles had a 4.54 team ERA coming into action on Tuesday, ranking toward the bottom of the conference. BC really needed to take advantage against Northeastern to turn around its season. Fortunately for the Eagles, they did—earning a 10-7 win over the Huskies.

The Eagles (7-5, 1-4 Atlantic Coast) capitalized on the Huskies’ (7-11) mistakes throughout the afternoon. In the top of first, after a one-out single by Johnny Adams, Northeastern starter Sean Mellen struggled with his control. Mellen walked Donovan Casey and Gian Martellini to load the bases, followed by another free pass to Mitch Bigras that forced in the first run of the game. While Mellen retired the next hitter, Brian Dempsey, with a strikeout, he then threw a wild pitch that allowed Casey to score and hit Jake Goodreau with a pitch in the same at bat to reload the bases. Mellen received no help from his defense either, as Huskies right fielder Cam Walsh allowed two more Eagles to score. With only one hit in the inning, BC had a 4-0 lead before the Huskies came to bat, thanks to three walks, a hit batsman, and an error.

BC added to its lead in the third. Martellini led off the inning with a double to left and Chris Balogh walked, allowing Dempsey to drive in Martellini with an RBI single for the fifth run. Mellen failed to make it out of the inning, as he was pulled after walking Anthony Maselli to load the bases with only one out. The Eagles would score two more in the inning with a Dante Baldelli sacrifice fly and two out single by Jake Alu. Mellen was charged with seven runs, five earned, and walked five with four strikeouts in his poor outing. The Eagles held a commanding 7-0 lead.

Jack Nelson had a strong performance as he got the start for the Eagles. Nelson went the first four innings and shut out the Huskies, limiting them to one hit while walking one and striking out a couple. Zach Stromberg and John Witkowski combined for three shutout innings in relief and the Huskies had only three base runners on two hits in the first seven innings.

The offense continued to work while BC pitchers dominated. The Eagles added insurance in the sixth when Baldelli scored on Casey’s double play. They also tallied two more runs in the eighth, as Baldelli, who scored twice and drove in two on the day, doubled home a run and scored on an Alu groundout. BC was up 10-0 heading to the bottom of the eighth on its way to a blowout victory—or so it thought.

Luke Fernandes came into the game to pitch the eighth inning and was hit hard, as the Huskies’ bats finally broke out. Northeastern hit for the cycle against Fernandes, who surrendered four runs on four hits before getting pulled after recording just two outs. Sean Hughes, who relieved him, was no better. Hughes couldn’t record an out. He issued four straight walks against the only batters he faced, including a wild pitch. That tacked on another earned run for Fernandes in addition to the run forced home by Hughes, cutting the Eagles’ lead to 10-6. Alu came on to record the final out of the eighth, but all of a sudden it was a game going into the ninth.

Alu was back on the mound to close the game out, but he proved just as ineffective as Fernandes and Hughes. Nick Fanneron started the bottom of the ninth with a pinch-hit home run over the right field fence, the Huskies’ second homer on the afternoon, making it 10-7. After a Charlie McConnell double, head coach Mike Gambino went to Casey, who sealed the 10-7 win for BC with his second save of the season.

While the offense breaking out for 10 runs was encouraging as the Eagles move forward, this game was a lot closer than it should’ve been. The pitching depth and effectiveness continues to be a cause for concern. The Eagles were dominant in the first seven innings. Nelson, Stromberg, and Witkowski combined for seven shutout innings, allowing just two hits while walking one and striking out three. All of those great efforts were almost wasted by the debacle that took place in the last two innings. Before Casey secured the victory with the final two outs, the combination of Fernandes, Hughes, and Alu surrendered seven runs on six hits and five walks without registering a strikeout.

This should’ve been a relaxing day for Gambino’s crew and a blowout win for the Eagles. Instead, Gambino had to walk back and forth from the mound as he watched his team’s lead shrink from 10 to three in less than two innings. Going forward, if the Eagles hope to compete in a competitive ACC, they need to play a complete game for nine innings.