Home » ‘Kingdom City’ Explores a Blending of Theater and Reality 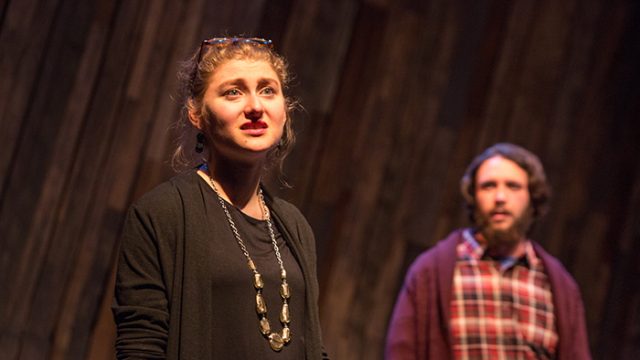 ‘Kingdom City’ Explores a Blending of Theater and Reality

Written in 2007 as a response to George W. Bush-era censorship and support of pro-abstinence groups, Sheri Wilner’s Kingdom City still stands against censorship and oppression, and Boston College’s production reminded everyone of its relevance. Directed by John Houchin, chair of the theatre department, the play is a touching reflection about guilt, silence, and the liberating power of theatre.

After he is awarded a teaching fellowship in a college nearby, Daniel and Miriam Bloom (Brennan Boyle, MCAS ’17 and Emma Howle) arrive to Kingdom City, Mo. The couple leaves New York in failure: Miriam has been struggling to find good directing jobs and feels devastated by her office, and Daniel, although successful as an author in the past, cannot complete a draft he’s been working on for seven years. As a Jewish couple in an extremely puritan Christian city, they are undeniably out of place. When Miriam is offered a position to replace the theatre director in the local high school, she reluctantly accepts and decides to mount a performance of Arthur Miller’s The Crucible in an ironic turn of doing “a play about sexually-repressed teenagers in a town of sexually-repressed teenagers”.

Here, she meets Crystal (Julia James, MCAS ’17), an obnoxious rebellious girl willing to do anything to get into Juilliard; Matt (Dan Quinones, MCAS ’19), an extremely distressed teenager deeply committed to Christianity and the purity of his acts; and Katie (Sarah Lambert, MCAS ’18), his girlfriend, who is starting to doubt her faith and the decisions others have made for her. After knowing the play involves a kissing scene, Matt raises his concerns to the pastor, Luke Overbey (Ted Kearnan, MCAS ’17), who teaches the purity class he and Katie attend. The pastor, who has befriended Daniel and is allegedly attempting to return meaning to his life, then starts a campaign to censor Miriam’s production.

The characters question their place in the world, and recognize their own silence, which turns to a questioning of Kingdom City’s order that delves unpredictably in the characters’ values. The play takes a good shot at posing a reflection about the line between theatre and reality, which Wilner achieves impeccably by including excerpts from The Crucible, Saint Joan, Miss Julie, and Macbeth. The climax of this parallel is reached in the purity ceremony, which presents the play’s moment of strongest tension and best showcases Houchin’s expertise as a director.

Wilner’s script is full of depth and emotion, yet it does not quite achieve its aims. In the playwright’s note, she says she attempted “not to write a ‘Red-State-Bad-Blue-State-Good-Story,’” but rather a sincere account of the personal experiences “on both sides.”

But the script does not reach fully its ambitious goal. The censors are represented only by one character, Luke Overbey who, despite Kearnan’s solid portrayal, is written in a way that does little to arouse sympathy from the audience.

Rather, it best achieves an incomplete version of its objective: it represents the struggle, contradictions, and personal transformations of the silenced and the oppressed. Miriam cannot find her place in the world as a failed director, and Daniel literally cannot find the words for his manuscript. Crystal feels like a pariah in a town that will never understand her, and she is never taken seriously by her director. Katie has never had a say in her life, and is about to take a virginity pledge pressured by her father, and finds little solace in Crystal’s bossiness. Finally, Matt cannot express his annihilating secret—an anxiety that Quinones performs excellently.

The cast delivers with impeccable portrayals. Howe as Bloom earnestly interprets a character in a midlife crisis with humor and sharpness, and Boyle artfully enacts a bland Daniel, and his chemistry on stage with Howe is admirable. Lambert and Quinones do an excellent job performing the two most emotionally complex characters in the play, Katie and Matt. Lambert never ceases to sincerely display her character’s struggle, and Quinones does a touching execution of someone defeated by guilt. James delivers a solid performance in delivering an obnoxious yet later complex Crystal, although remains slightly limited by her character’s caricatured writing. This problem also faced, yet overcome by Kearnan, who plays well an apparently loving pastor with perverse intentions.

Staged in a mesmerizing set designed by Larry Sousa, the play takes an ambitious shot at playing with the characters’ disposition on the stage, and with the timing of their appearances, another display of Houchin’s mastery. Although awkward at moments, the semi-circular positioning of the audience is well-executed. On the whole, Kingdom City produced sincere and touching performances, and provided the audience with an enjoyable and thought-provoking display of theatre. 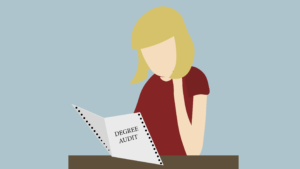