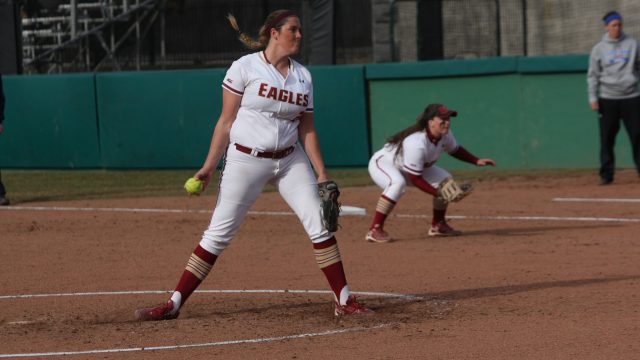 After a dominant performance from junior right-handed pitcher Jessica Dreswick, Boston College softball defeated Massachusetts Lowell at home, 3-1, on Thursday afternoon. Dreswick picked up the win, but it was Kendra Friedt who closed out the Eagles’ (18-12, 4-2 Atlantic Coast) victory in their first home game of the season. The sophomore struck out three of the eight batters she faced.

It all began with a series of quick innings—a byproduct of good pitching from both Dreswick and Lowell (7-13) sophomore Kaysee Talcik, who threw all six frames. Dreswick held the River Hawks to two hits through three innings of play. But that didn’t translate to instant offense. Talcik held the Eagles hitless up until the fourth inning.

That’s when everything changed.

All four runs of the game were scored in the fourth inning, which saw classic small-ball play from the River Hawks. On the other hand, the Eagles took advantage of their speed and baserunning ability to force errors, and in effect, tack on runs.

Dreswick forced two outs to start the top of the fourth inning, but Sydney Barker singled down the left field line on an 0-2 count to keep the inning alive. Dreswick then plunked Vanessa Cooper on the first pitch, advancing Barker to second base. Madison Alcorn laced a timely single down the left-field line, seeing Barker fly the 120 feet to the plate. Dreswick was able to salvage the inning, punching out junior catcher Kate Mims.

BC’s offense backed up Dreswick’s pitching in the bottom half of the inning. Taylor Coroneos started the inning off by smacking the ball toward shortstop on an 0-2 count, legging out the throw to safely reach first base. She stole second moments later, and advanced to third as junior lefty Annie Murphy grounded out to second.

Jordan Chimento singled in Coroneos, tying the game. Chimento was pulled in favor of pinch-runner Brenna Griesser, who proceeded to steal second base. When junior middle-infielder Chloe Sharabba slapped a single to right-center, the speedy Griesser set her eyes on home plate. With Griesser barreling down the third-base line, River Hawks catcher Mims made an error on the throw, allowing the run to score. Sharabba advanced all the way to third on the play. Soon after, she was able to score on a wild pitch, giving the Eagles their third run.

In Dreswick’s fifth and final inning, she limited the River Hawks to just one hit and returned to the dugout after four batters. She would be replaced by Friedt the next inning, who would finish the matinee affair.

Although BC could not muster any more offense against the fatiguing Talcik, three would prove to be more than enough. Friedt entered the sixth inning with a vengeance, sitting the River Hawks down, one-two-three. Lowell threatened with two singles in the seventh, but Friedt quickly quelled any sort of comeback, sealing the win.

The Eagles, who have been riding a wave of good offense and even better pitching, will soon be thrown back into conference play. The ACC is one of the best college softball conferences in the nation. BC will have to continue pitching well and scoring timely runs to take down the country’s powerhouses.