Home » BC Pulls Away From Virginia for Second ACC Win 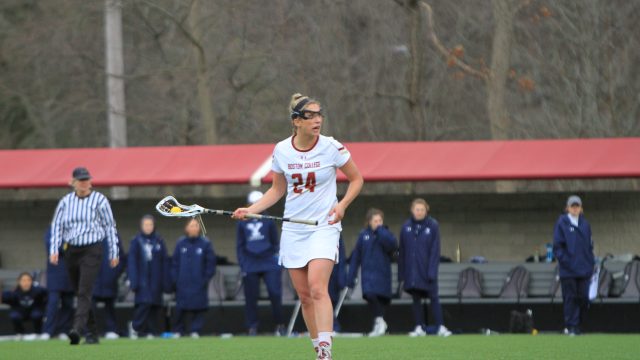 BC Pulls Away From Virginia for Second ACC Win

Boston College lacrosse has had a very solid season this year, but prior to Saturday, only had one win in the ACC. The No. 18 Eagles came into the game against the No. 17 Cavaliers looking to get another crucial conference win late in the season. It was snowing hard on Newton at the start of the game, but that did not slow down the Eagles’ offense as they tallied an impressive offensive performance in a 17-10 win against UVA.

BC (10-4, 2-3 Atlantic Coast) was the first team on the board, with Kayla O’Connor putting the ball in from a sharp angle for her 31st goal of the year. But UVA (7-5, 2-3) would not let up early, setting up several prime scoring opportunities. Eagles were given a prime opportunity of their own when Kaileen Hart was awarded a free-position shot, but Rachel Vander Kolk made the save for UVA. The Cavaliers rushed the ball into the Eagles’ zone and tied the game on a goal from Avery Shoemaker.

The tie would not stand for long. Soon after the draw, Kenzie Kent fired the ball past Vander Kolk to once again put the Eagles up. Just like that, BC took all the momentum. After some back and forth play, the Eagles had a long streak of extended time in the zone. The offense paid off eventually, with Laura Frankenfield scoring another goal. Shortly after the faceoff, the Eagles again were awarded a free-position shot. This time, Sam Apuzzo fired it over Vander Kolk to give BC its second goal in 24 seconds, and a 4-1 lead.

UVA then called a timeout, and the game settled down. Despite some solid chances for UVA, though, the score remained the same. The scoreless period was broken when Elizabeth Miller picked up a loose ball at midfield and ran it up before passing it to Katie Weeks. The senior attacker sent it up front to Kent, who placed it past Vander Kolk to extend the lead.

Kent finished the game with three goals and five assists. The game was only her second of the season—and her first start—because she is also a member of BC women’s hockey, and has just returned to lacrosse now that the hockey season is over.

“She’s an amazing player, incredibly selfless,” head coach Acacia Walker said of Kent after the game. “I give a lot of credit to her teammates who love having her back, and they accept her, and they know that she makes us better.”

UVA scored soon after when Lilly DiNardo ran the ball down field and fired it over Ochoa’s left shoulder and into the net. The Cavaliers continued to pressure BC, but they failed to get anything past Ochoa for several minutes. Then, the entire tide of the half changed in a short span of time. It started when Kasey Behr shot one clean past Ochoa to bring UVA back to within two goals. Almost right off the draw, Besser Dyson got the ball in close and shot it into the net. On the next faceoff, Dyson again quickly got the ball and scored. In 25 seconds, it had gone from a three-goal BC lead to a tie game.

Apuzzo notched another goal to put BC up with a little over five minutes in the half, but UVA answered back soon after with a goal from Maggie Jackson. Jackson scored again with less than two minutes left to give UVA its first lead of the game. The Eagles risked facing a deficit at the half after leading by four goals to start.

But BC was not ready to lay off the gas. After the draw, Apuzzo managed a clean stick check that knocked the stick out of a defender’s hand. The Eagles recovered the ball and quickly got it down field where Apuzzo put it past Vander Kolk from the side of the net. The goal gave Apuzzo her seventh hat trick of the season, but more importantly it gave BC a chance to reclaim the lead before the half.

“You always want to go up at half time just to send a message for going into the next half,” Apuzzo said. “We saw the opportunity and we took it.”

The Eagles did take advantage of that opportunity, as Emma Schurr scored another goal with only 11.4 seconds left, giving BC an 8-7 lead at halftime.

The snow slowed down as the second half started, but BC’s offense would not let up. Three minutes in, Apuzzo scored another goal to expand the lead, but UVA scored off the ensuing draw. Less than two minutes later, Apuzzo scored her fifth of the game to again expand BC’s lead. The back and forth would continue, with Behr scoring her second goal to again bring UVA to within one. The Eagles then scored two goals in 10 seconds to pull further away from UVA. The game would go scoreless for the next eight minutes, until Apuzzo found the back of the net for the sixth time, giving BC a 13-9 lead.

“I think every game there’s some person that steps up and is just feeling it. Today I was fortunate enough for it to be my day,” Apuzzo said. “But I wouldn’t be able to do it without the girls that were working with me.”

Apuzzo entered the game only one point behind Penn State’s Steph Lazo for most points in the nation this season. Her six-point game today moves her into a tie for first—Lazo scored five points in her own game on Saturday, a 16-12 win over Ohio State.

UVA scored again, but BC would respond right back, adding four goals before the end of the game—including the 50th goal of the season for Kate Weeks—to finish with a much-needed 17-10 win. The victory was only the third all-time for the Eagles against the Cavaliers, and the first since March 30, 2013.

More important is that it gives the Eagles a second conference win toward the end of the season.

“It’s huge,” said Walker. “It’s the most important thing we have to do here. We had a couple of losses in the beginning of the year that we can never get back, so the only thing we can do is bulldoze forward and try to compete with the ACC games that we have left.”