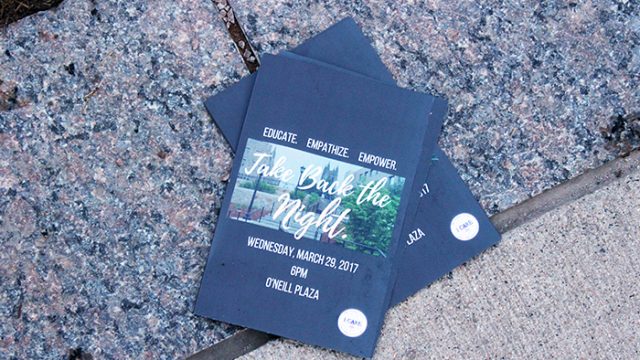 For Erin Doolin, a graduate assistant in the Boston College Women’s Center, sexual assault became an immediate reality during her undergraduate years at Emerson College. An issue that she had always seen as distant, something that “happens at Big Ten schools, with football teams and stadiums,” not “this artsy little school that didn’t even have a campus, where our best team was our Quidditch team,” suddenly became close, and very real.

Doolin’s brother, also an Emerson student, was the sole witness in a sexual assault case at the college, which significantly affected his life, and  Doolin’s as well. Now, Emerson, her “artsy little oasis,” became yet another school where sexual assault was a far from uncommon crime. If it happened at Emerson, it could happen anywhere.

This experience stuck with Doolin long after she left Emerson. After graduating with a major in studio television production, a minor in creative writing, and experience producing student television and editing the school magazine, she followed her interest in entertainment to Los Angeles. She worked in reality television for a couple of years before realizing that wasn’t for her.

“I just knew that I loved stories, I loved storytelling, and I loved making people feel heard,” she said. “I loved the idea of helping people. I loved Emerson and the mentoring relationships I had with younger students–that was where I got the most joy in my college experience, helping people feel like they could reach their full potential.”

With this realization in mind, Doolin said farewell to show business, and began her move toward higher education.

She took a job at a Los Angeles community college in its fundraising office, helping students apply for scholarships. Many of these were first-generation college students or students whose second language was English, and never thought that college would work for them. She worked to show them that a college degree was a real possibility.

While in Los Angeles, she volunteered at the LGBT Center. There, she helped high school gay-straight alliances grow and develop and ran a storytelling workshop to help members of these clubs tell their stories as a form of activism.

Doolin decided to switch her career path, realizing that social justice work was really what she was interested in. She realized that “the thing that had always brought [her] joy was the community on campus,” so she applied to graduate school, was accepted to BC, and took an overnight flight back to Boston to interview for a position at the Women’s Center. The only thing she wasn’t prepared for was the return to the bad weather.

“It was the worst winter,” she said. “I didn’t have a winter coat, I was just so sleep deprived, and I changed into my interview clothes in the bathroom of Logan Airport. I just thought, ‘Who the heck is going to hire me now?’”

Nevertheless, Doolin was offered a different position from the one she had interviewed for, one for sexual assault prevention. After leaving, she realized that she had appreciated talking to the women at the Women’s Center, and though she hadn’t been expecting this job, she took it, even without fully understanding what it was at the time.

Now, Doolin runs BC’s Bystander Program, Stand Up BC: Bystander Intervention, and is involved in running Concerned About Rape Education (CARE) Week. CARE Week, which ran from March 27 to 31 this year, honors survivors of sexual violence and acknowledges that sexual assault is a reality on BC’s campus. Doolin’s job is to help survivors find support on campus and to prevent sexual violence through promoting bystander intervention. Besides Stand Up BC, she co-facilitates HEAL, a confidential support group for survivors of sexual violence, and is a SANet advocate, working for the SANet hotline. In Doolin’s words, she’s “living CARE Week all year round.”

At Emerson, Erin Doolin “didn’t know anything about feminism,” but her experiences through her brother and with social justice in Los Angeles have led her to the Women’s Center, where she continues to help prevent sexual violence and make BC a safer place.