After feeling like an outcast during his childhood, Alex Newell used drag to express himself and discover his identity.

On Monday night, the Undergraduate Government of Boston College invited Newell, a former regular on TV series Glee and current musician, to discuss his life and career, and how the two have been influenced by race and sexuality.

A native of Lynn, Mass., Newell didn’t have the lifestyle that he does now. He was an only child of a single mother, after his father died when he was 6. He spent most of his childhood alone while his mother was working the night shift as a nurse in order to provide.

“Since I grew up with a single mother, my brain always leans to the feminine side,” Newell said.

According to Newell, much of his youth was spent pushing his mother away, in fear that she wouldn’t accept him if she found out that he was gay.

Newell grew up in and around church. Though he knew from a very young age that he was gay, he hesitated to come out because he was unsure of how those around him would react. When Newell came out to his mother, however, she told him that she loves him regardless, and he will always be her son no matter what.

Newell was bullied from a young age for how he talked, walked, and acted, but he could never understand why his peers would pick on him. Now, he said, he realizes that their hatred stemmed from a lack of understanding.

“Growing up, I hated math,” he said. “I hated math because I didn’t understand it.”

Throughout his life, Newell learned that when people don’t understand something, their first instinct is to dislike it. Being gay, he said, he has experienced this countless times.

Motivated by these experiences, he embarked on a lifetime journey of figuring out who he truly is. Much of this self-discovery took place through his involvement in The Glee Project and as a cast member on Glee.

“I thought I was going to be a gospel artist before I came on The Glee Project,” Newell said.

But his plans quickly changed. Newell had been involved in musical theater for some time before joining The Glee Project. As a male soprano, he had always been more inclined toward female roles because they better fit his voice. He performed his first drag performance on national television as part of the show.

“At that moment, I knew I was never going to be a gospel artist,” Newell said.

Aside from the obvious challenges of the competitive atmosphere on the show, Newell was also forced to come to terms with himself.

“The Glee Project was one of the best times of my life,” he said. “I learned so much about myself. But it was hard to go from being a fake person on stage to a real person on screen—in order to do that, you really need to know who you are.”

On the show, Newell said, he found himself clammering to be noticed, as he wasn’t used to being out of the spotlight, but during The Glee Project, he was always in the bottom three.

Newell used drag as a way to stand out on the show.

“Drag is a way of expressing myself,” he said. “My gender and sexuality don’t define who I am and neither does what I wear.”

Although Newell didn’t win The Glee Project, he eventually became a series regular on Glee. He played the character Unique Adams, a transgender student.

“When I became a series regular on Glee, that was a pivotal moment for me,” he said. “I finally felt like I was truly enough.”

Newell’s experiences on Glee, especially playing a transgender character, taught him a lot about body image and self love.

“Being on the show revealed to me what my own identity is in my sexuality,” he said. “It’s hard to be black and gay and effeminate. I have to fight for a lot in my life.”

According to Newell, life in Hollywood is centered around stereotypes, and his identity doesn’t always correlate with the expectation.

“I’m a lot of things, and none of them are ‘normal,’ but I truly believe that there is no ‘normal,’” he said. 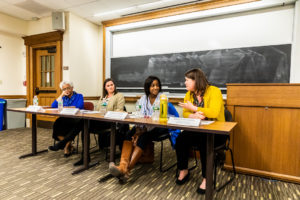