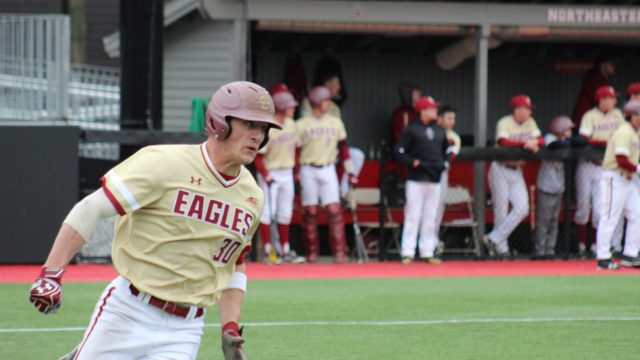 The temperature surpassed 80 degrees on Tuesday for the first time in 2017 when Boston College baseball took the field at Shea Field. The Eagles came into action after being swept in a home weekend series against No. 4 North Carolina, where they were outscored 48-14 in three games. With BC currently standing at an abysmal 1-14 record in a tough ACC, Birdball was definitely happy to play a non-conference game against local rival Harvard. The Eagles had won eight of their last 11 non-conference games, and continued their strong midweek play against the Crimson in an 8-5 comeback victory.

Jacob Stevens was given the start for the Eagles (10-20, 1-12 Atlantic Coast), but he was only scheduled to pitch the first inning since “it was his bullpen day,” according to head coach Mike Gambino. Stevens offered to face live hitters for his bullpen session to “work on some things” and Gambino gave him the okay to pitch the first inning against the Crimson (12-16, 1-7 Ivy). Stevens quickly retired the leadoff hitter, but then issued back-to-back singles, followed by a wild pitch to set up second and third with only one out. Harvard’s Patrick McColl brought a run home with a RBI groundout, but Stevens kept the Crimson at bay, allowing just the lone run in his only inning of work.

The Eagles were quick to respond in the bottom half of the inning. Donovan Casey led off with a four-pitch walk and Johnny Adams followed that up with a base hit. A double steal then put both runners in scoring position with nobody out. BC practiced situational hitting to manufacture runs in the inning. A groundout by Michael Strem and a sacrifice fly by Gian Martellini scored Casey and Adams to give the Eagles a 2-1 lead after the first inning.

The Eagles ran into some trouble in the third inning. After Jack Nelson recorded the first two outs in his second inning of relief behind Stevens, Harvard strung together a pair of singles and a walk to load the bases. Nelson escaped the jam, however, by striking out Jake Forte on three pitches. The Eagles clung to their 2-1 lead after three.

BC couldn’t evade trouble in the fourth inning, though. Thanks to a walk and groundout, Harvard’s Devon Peterson was standing on second base in scoring position with one out in the inning. Johnny Adams couldn’t handle a tricky hop off the bat of Josh Ellis, as the ball bounced underneath his glove and into left field. The error allowed Peterson to score from second, tying the game at 2-2. Two batters later, Harvard’s Patrick Robinson capped off the inning with a two-out, two-run home run over the right field scoreboard to put the Crimson ahead 4-2.

The major momentum shift of the game took place in the top of the fifth inning. The first two runners reached base for the Crimson and created a potentially big inning to pull away from the Eagles. Forte hit into a 6-4-3 double play, but Harvard’s Jake Suddleson got caught in no man’s land after running too far past third base. After a short rundown, Martellini tagged out Suddleson to complete a 6-4-3-5-2 triple play to get them out of the jam and send the crowd into frenzy.

“The double play part of it was like, ‘Alright here we go,’” Gambino said. “The triple play part was a bonus. The coolest part was the students going berserk on the ramp. The way our students are, when they get [the ramp] going, our boys think [this] is the best place to play in the country.”

Despite the Crimson adding a run to its lead with a run in the sixth, the Eagles took control of the game. BC kept pace with Harvard with two runs in the bottom half of the inning. Martellini singled home Strem to cut the deficit to 5-3, and then he came around to score on a double play groundout to make it a one-run game heading into the seventh.

The Eagles rode that momentum to a big seventh inning. BC played a little small-ball as Casey led the inning with a bunt single and Dominic Hardaway reached on an error on a sacrifice bunt attempt. Casey singled to load the bases with nobody out for Johnny Adams. He singled on a grounder deep in the 5.5 hole to tie the game at five. The Eagles would take the lead on a wild pitch, followed by a two-run single by Mitch Bigras, making it 8-5 Eagles.

The backend of the bullpen, consisting of Casey and Bigras, shut down the Crimson in the last three innings. Casey pitched two shutout innings allowing one hit, while walking one and striking out four. Bigras walked one of the three men he faced, but he recorded the final two outs to seal the 8-5 comeback victory over Harvard.

It was a feel-good win for the Eagles at home on a warm spring day in front of a large student crowd. But now they will hit the road again to battle a conference opponent at Duke. The Eagles have lost 14 conference games consecutively, seven of which they allowed 10 runs or more and 12 of which they scored four runs or fewer. The Eagles showed that they could manufacture runs and hit in the clutch, as well as have timely pitching, but seemingly only in non-conference games. Birdball needs to transfer these fundamentals to conference games to collect a few wins before the end of the year. It’s been a disappointing year for the Eagles, who made the NCAA Tournament last season, but BC still has plenty of opportunities to win meaningful conference games, starting this weekend as it heads down to Durham.