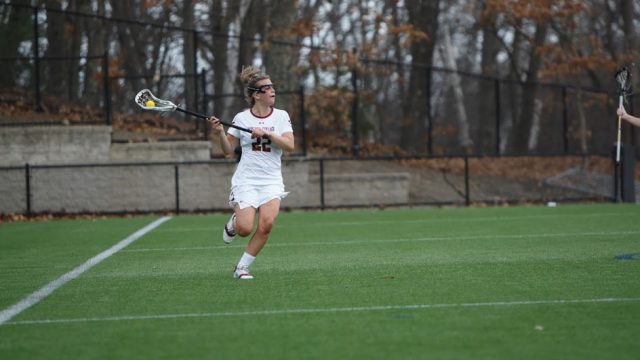 Easter break started a little later for Boston College lacrosse as the team headed to Hanover, New Hampshire to take on Dartmouth College. The Eagles have only beaten Dartmouth once in their 20-game rivalry, with the lone victory coming last season in a 14-9 win. On Wednesday afternoon, BC (10-5, 2-4 Atlantic Coast) added a second victory to its history, taking home a 16-9 win.

Kenzie Kent scored the first goal of the game, only 30 seconds into the first half. Only a minute later, Laura Frankenfield got around her defenders and shot the ball right past Kiera Vrindten. Dartmouth (5-6, 0-4 Ivy League) stopped the bleeding by confusing goaltender Zoe Ochoa, faking right and going left to sink the ball into the net. After a second shot went wide, Dartmouth shot right above the senior’s stick to tie up the game. While four goals were gained within the first five minutes, the second five were relatively quiet, as neither team outsmarted the other.

The dry spell ended when Frankenfield picked up her second goal of the game off of a pass from Kent, shooting the ball between Vrindten’s legs to regain the lead for the Eagles. Sam Apuzzo was soon fouled for hitting a Big Green player while trying to increase the Eagles’ lead. The player advantage was helpful for Dartmouth, as Courtney Weisse tied up the game at three. After Apuzzo came back on the field following her two-minute foul, she received a pass from Kent to shoot the ball right into the back of the net, regaining the BC lead. The half remained a cat-and-mouse game with Dartmouth playing catch up until the last five minutes, when Kierra Sweeney was issued a yellow card. With Frankenfield scoring a hat trick goal and Apuzzo quickly following with a goal of her own, the Eagles headed off the field with a two-point lead.

Dartmouth came into the second half strong, and Taryn Deck narrowed the BC lead early. Following her yellow card, Sweeney tied up the game at 7-7 only eight minutes in. The two early goals didn’t faze Kate Weeks, who circled around the goal and whip the ball past Vrindten. Less than a minute later, she showed why she’s ranked fourth nationally for goals this season by taking a successful shot to take back a two-goal lead. After a point-blank shot by Weisse was saved right in front of the goal, Mary Kate O’Neill came out from behind the net to send a powerful shot into the nylon. Shortly after, Kent delivered a fourth-straight goal in 10 minutes.

As Dartmouth began to get frantic and lose its pace, Deck dropped the ball close to the BC goal and Apuzzo picked it up. Racing down the field, she was met with no defenders and the only person standing in her way was Vrindten. The freshman was no match for the experienced attacker, and the Eagles increased their lead to five points. Sophia Turchetta narrowed the BC lead when she took a desperate shot four seconds before the shot clock ran out. The point didn’t do much to change the tide of the game, as Weeks, Apuzzo, and Frankenfield responded with four more goals. Elizabeth Mastrio found the back of the net with two minutes to go, but the Eagles came out with a second-consecutive win against the Big Green. 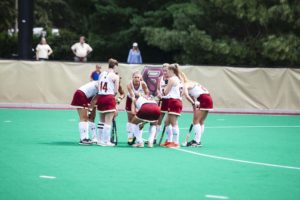